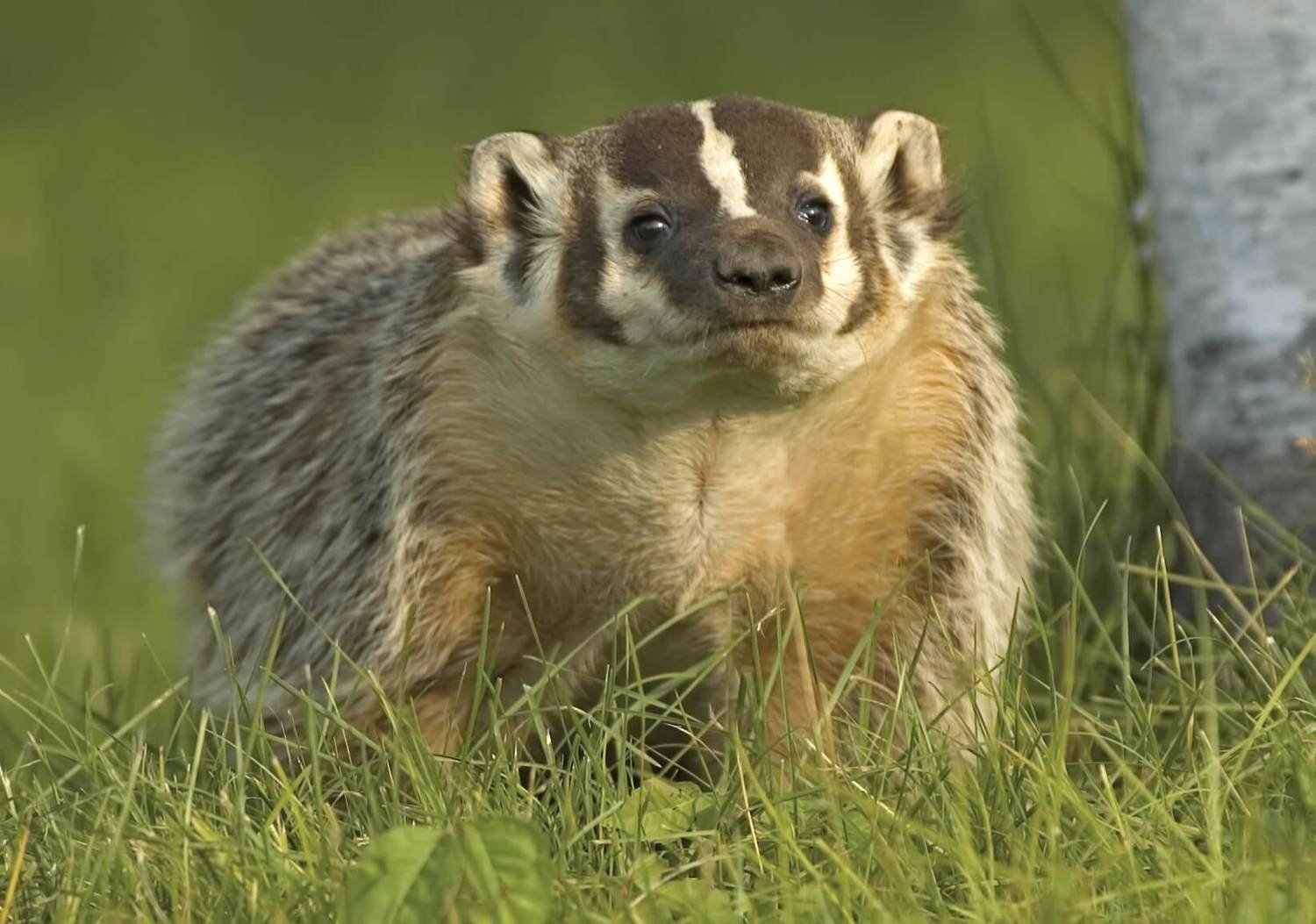 Your World Animal Foundation Adopt A Badger Kit comes in a Deluxe WAF Folder and includes:

Adopt A Badger Kits make great gifts and can be sent directly to the recipient. Simply supply the recipient's name and mailing address as shipping information. We'll even include a letter stating the Adopt An Animal Kit is from you.

Badgers are short-legged omnivores in the family Mustelidae which also includes the otters, polecats, weasels and wolverines. The 11 species of badger are grouped in three subfamilies: Melinae (9 Eurasian badgers), Mellivorinae (the honey badger or ratel) and Taxideinae (the American badger).

Badgers have rather short, fat bodies, with short legs for digging. They have elongated weasel-like heads with small ears. Their tails vary in length depending on species; the stink badger has a very short tail, while the ferret badger's tail can be 18 to 20 inches long. They have black faces with distinctive white markings, gray bodies with a light-colored stripe from head to tail, and dark legs with light colored underbellies. They grow to around 35 inches in length including their tail.

The European badger is one of the largest; the American badger, the hog badger and the honey badger are generally a little smaller and lighter. The stink badgers are smaller still, and the ferret badgers are the smallest of all. They weigh around 20 to 24 lb on average, with some Eurasian badgers weighing in at around 40 lb.

The badgers lower jaw is articulated to the badgers upper jaw, meaning it is almost impossible to dislocate the badger's jaw. This enables the badger to maintain its hold on prey with great ease, but limits the badgers jaw movement to hinging opening and shutting or sliding from side to side.

Badgers are found in much of North America, Ireland, Great Britain and most of Europe as far as southern Scandinavia. They live as far east as Japan and China. The Javan ferret-badger lives in Indonesia, and the Bornean ferret-badger lives in Malaysia. The honey badger is found in most of sub-Saharan Africa, the Arabian Desert, southern Levant, Turkmenistan and India.

The behavior of badgers differs by family, but all shelter underground, living in burrows called setts, which may be very extensive. Some are solitary, moving from home to home, while others are known to form clans called cetes. Cete size is variable from two to fifteen.

Badgers are nocturnal. They can run or gallop at 16 to 19 mph for short periods of time.

In North America, coyotes sometimes eat badgers and vice versa, but the majority of their interactions seem to be mutual or neutral. American badgers and coyotes have been seen hunting together in a cooperative fashion.

The diet of the Eurasian badger consists largely of earthworms, insects, grubs and the eggs and young of ground-nesting birds. They also eat small mammals, amphibians, reptiles and birds...as well as roots and fruit.

The honey badger of Africa consumes honey, porcupines and even venomous snakes; they will climb trees to gain access to honey from bees' nests.

American badgers are fossorial carnivores – they catch a significant proportion of their food underground, by digging. They can tunnel after ground-dwelling rodents at amazing speeds. Badgers have been known to become intoxicated with alcohol after eating rotting fruit.

Badgers are sometimes kept as "pets". Like all wild animals, badgers are not suitable as companion animals and suffer from the stress of captivity. Badgers can be fierce animals and will protect themselves and their young at all costs. They are capable of fighting off dogs and other much larger animals. The complex physical, psychological and social needs of wild animals can never be met when they are kept as pets. Living in constant frustration, these wild animals can inflict serious and catastrophic injuries. They can also spread diseases that are deadly to humans.

Badgers are commercially trapped for their pelts by the inhumane fur industry. Their hair is used to make shaving brushes and clothing. Virtually all commercial badger hair comes from mainland China.

Thousands of badgers are inhumanely killed each year by the cruel activity of baiting. Baiting involves digging into a sett to locate the badgers and then pitting them against dogs. Lamping is another method that baiters use to acquire badgers for fighting. A bright light is used to dazzle and spotlight badgers out feeding at night. They are then shot or attacked by dogs.

Many badgers are killed by humans in the mistaken belief that this will stop cattle from being infected with bovine tuberculosis. Badgers are cruelly baited with dogs and dug out of their setts. Others are trapped, poisoned or shot.

Many badgers are loosing their setts and vital feeding areas due to human development.

Although rarely eaten today in the United States or the United Kingdom, the consumption of badger meat is still widespread in Russia.