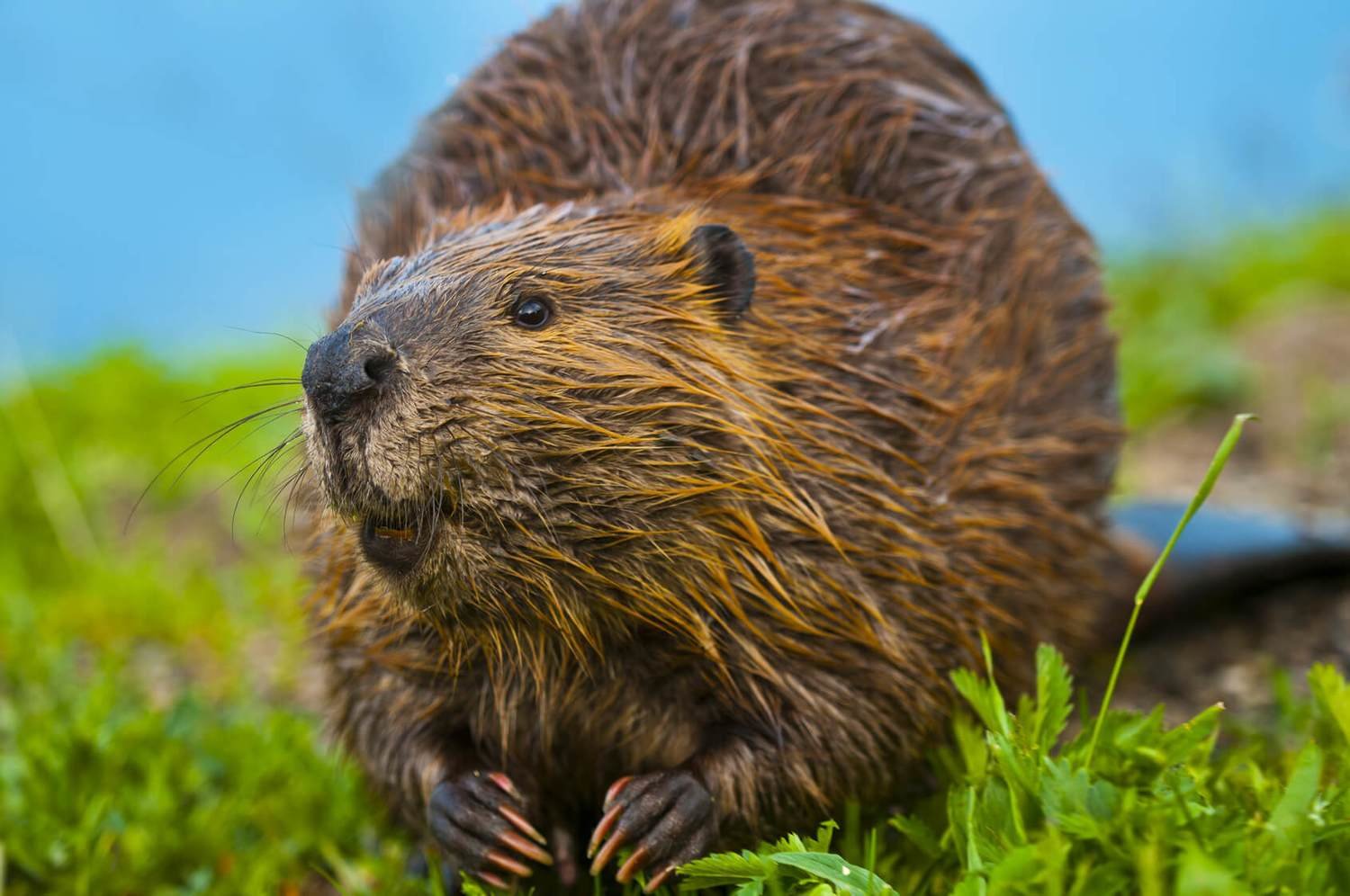 Your Adopt A Beaver Kit comes in a Deluxe Folder and includes:

Adopt A Beaver Kits make great gifts and can be sent directly to the recipient. Simply supply the recipient's name and mailing address as shipping information. We'll even include a letter stating the Adopt An Animal Kit is from you.

Beavers have webbed hind-feet, and broad, scaly tails. Beavers do not have good eyesight, but they posses good senses of smell, hearing, and touch. Their teeth grow continuously throughout their lives so as not to be worn down by chewing wood. Their powerful front teeth are used to cut trees and plants used by beavers for food and for constructing their homes. While slow on land, beavers are excellent swimmers and are able to stay under water for around 15 minutes.

Beavers are well known for building dams on rivers and streams, and for building "lodges" in the ponds created by their dams. They also construct canals used to float their building materials. Their incredible construction abilities makes beavers a keystone species as they create wetlands that are inhabited by many other species. No other animal, with the exception of humans, shapes their landscape as much as beavers. The ponds and the wetlands they create help to remove sediments and pollutants from waterways.

If a beaver's chosen home has no existing ponds, they must construct a dam along a river to create a pond before building their lodges. Sometimes they create a series of dams. The dams also provide protection against predators, such as bears, coyotes and wolves, and create easy access to food sources during the winter months.

To construct a dam, beavers erect vertical poles which are then filled with a crisscross of horizontal branches. The gaps between the branches are stuffed with weeds and mud. They always work at night. Beavers carry their building supplies with their fore-paws and their teeth.

Beaver lodges are constructed similarly to their dams. Lodges have underwater entrances, making it almost impossible for other types of animals to enter. Two den areas within the lodge allow a space for drying off, and another space designated as a living area.

Lodges house up to four adult beavers and up to eight children. Beavers spend the winter in their lodges with a winter stock of wood for eating. Throughout winter, they eat the underbark of sticks and logs they keep stored in their ponds. The top of the pile accumulates snow in the winter, insulating the water and providing an area where they can breathe when outside their lodge. When the ice breaks up in the spring, they leave their lodges to roam until fall.

Beavers are known for their unique alarm signal. Frightened and startled beavers rapidly dive while slapping the water with their tails, making a loud sound that can be heard both above and below water. The warning signal alerts other nearby beavers to dive to safety.

Beaver families consist of a monogamous adult male and female couple and their kits and yearlings. While they mate for life; if their spouse dies they will partner with another beaver. Beaver families have up to ten members, in addition to the pair. The mother and father both take part in raising the children. They also both mark and defend their territory, and together they build and repair their dams and lodges.

Baby beavers spend their first month inside the lodge, being taken care of mostly by their mother while their father maintains the territory. They spend most of their time playing. As yearlings they learn to help their parents repair dams and lodges and collect food caches in the fall.

Older offspring often continue to live with their families. They continue to help keep up repairs and build food caches, and also help with grooming, feeding, and guarding younger beavers. Older siblings will also take over the responsibility of parenting if the original parents die or are somehow separated from them.

Beavers continue to grow throughout their lives, with adults growing to over 55 lb. Females are as big as or larger than males. In the wild, beavers live up to 24 years.

There were once over 60 million North American beaver, but as a result of hunting for its fur, its glands for medicine and because the beavers tree-felling and dams affect other land uses, the population has declined to around 12 million.

The principal threats to beaver populations are habitat destruction and degradation. Human population growth and increasing demands on water resources lead to water storage, diversion, and channelization projects that affect rivers, lakes, and wetlands. Water uses can cause short and long-term effects on beaver habitat by changing seasonal flow regimes and stream morphology, and by causing loss or degradation of riparian vegetation.

Intense grazing by wild and domestic ungulates in a riparian zone is also a primary cause of beaver habitat degradation. Although commercial trapping is no longer a threat to the species, depredation trapping to mitigate beaver damage, and illegal shooting and trapping are localized threats.