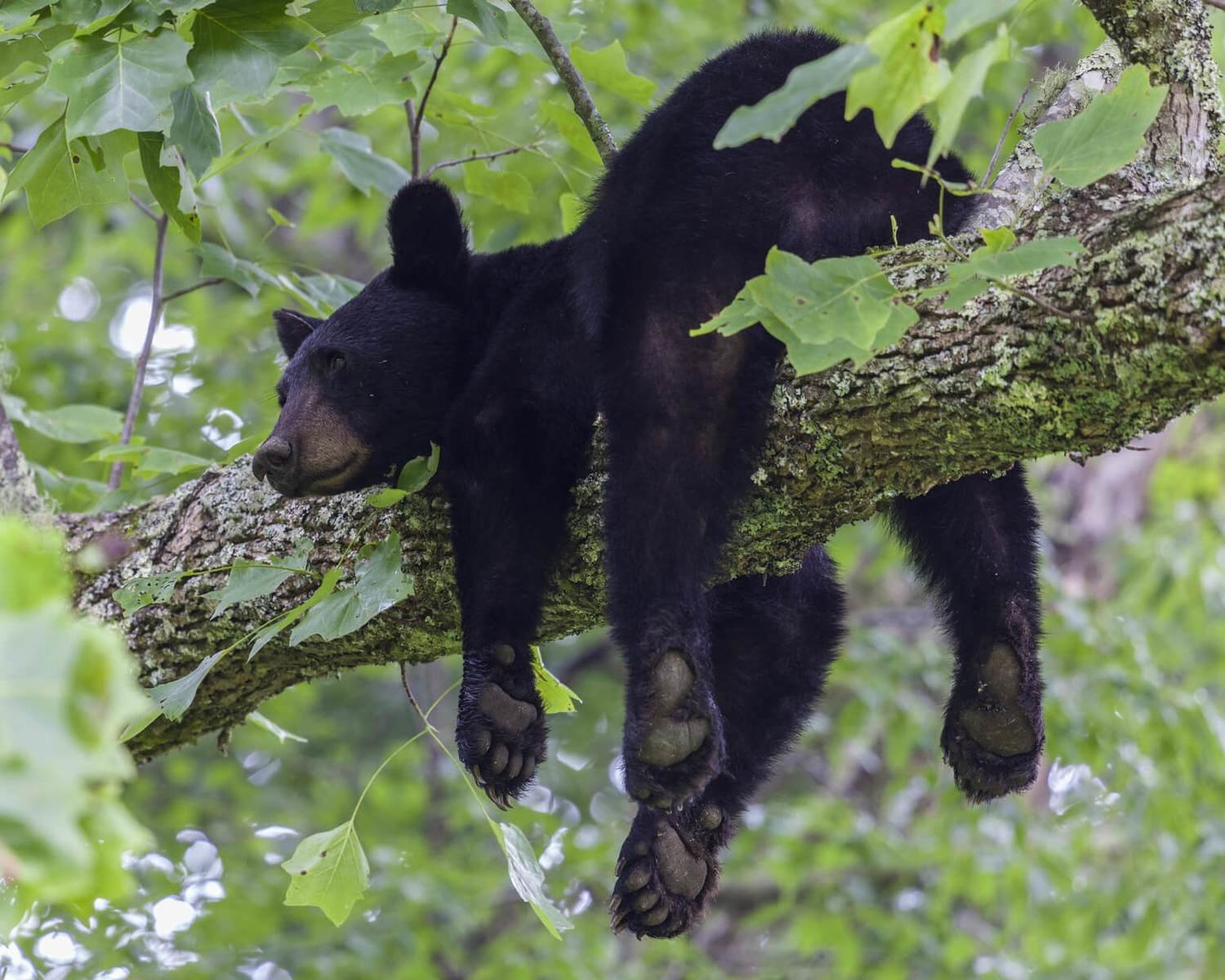 Adopt A Black Bear Kits make great gifts and can be sent directly to the recipient. Simply supply the recipient's name and mailing address as shipping information. We'll even include a letter stating the Adopt An Animal Kit is from you.

The American black bear (Ursus americanus), also known as the cinnamon bear, is the most common bear species native to North America. The black bear occurs throughout much of the continent, from northern Canada and Alaska south into Mexico, from the Atlantic to the Pacific. This includes 39 of the 50 U.S. states and all Canadian provinces. Populations in east-central and the southern United States remain in the protected mountains and woodlands of parks and preserves, though bears will occasionally wander outside the parks' boundaries and have setup new territories in recent years in this manner.

While there were probably once as many as two million black bears in North America, the population declined to a low of 200,000 before rebounding in recent decades, partly due to conservation measures. By current estimates, more than 600,000 are living today.

The black bear is about 5 feet long. Females weigh between 90 and 400 pounds, while males weigh between 110 and 880 pounds. Cubs usually weigh between seven ounces and one pound at birth. The adult black bear has small eyes, rounded ears, a long snout, a large body, and a short tail. They have an excellent sense of smell. Though these bears indeed generally have shaggy black hair, the coat can vary in color depending on the subspecies: from white through chocolate brown, cinnamon brown, and blonde, found mostly west of the Mississippi River, to black in the east (the same is generally true in Canada with the border being between Manitoba and Ontario). Further adding to the confusion, black bears occasionally sport a slight white chest blaze on either side of the river.

While black bears are able to stand and walk on their hind legs, they usually stand or walk on all four legs. When they do stand it usually is to get a better look at something. The black bear's characteristic shuffle results from walking flat-footed, with the hind legs slightly longer than the front legs. Each paw has five strong claws used for tearing, digging and climbing. One blow from a powerful front paw is enough to kill an adult elk.

Black bears prefer forested and shrubby areas but use wet meadows, high tidelands, ridgetops, burned areas, riparian areas and avalanche chutes. They also frequent swampy hardwood and conifer forests. After emerging from their winter dens in spring, they seek southerly slopes at lower elevations for forage and move to northerly and easterly slopes at higher elevations as summer progresses. Black bears use dense cover for hiding and thermal protection, as well as for bedding. They climb trees to escape danger and use forested areas as travel corridors. Black bears hibernate during winter and may build dens in tree cavities, under logs, rocks, in banks, caves, or culverts, and in shallow depressions.

Black bears reach breeding maturity at about 4 or 5 years of age, and breed every 2 to 3 years. Black bears breed in the spring, usually in May and June, but the embryos do not begin to develop until the mother dens in the fall to hibernate through the winter months (delayed implantation.) However, if food was scarce and the mother has not gained enough fat to sustain herself during hibernation as well as produce cubs, the embryos do not implant (develop). Black bear cubs are generally born in January or February. They are blind when born, and twins are most common, though up to four cubs is not unheard of and first-time mothers typically have only a single cub. By spring thaw, when the bears start leaving their dens, the cubs are fur-balls of energy, inquisitive and playful.

When their mother senses danger she grunts to the cubs to climb high up a tree. They are weaned between July and September of their first year, and stay with the mother through the first winter. They are usually independent by the second winter. Cub survival is totally dependent on the skill of the mother in teaching her cubs what to eat, where and how to forage (find food), where to den, and when and where to seek shelter from heat or danger.

Black bears are omnivores. They eat a wide variety of foods, relying most heavily on grasses, herbs, fruits and mast. They also feed on carrion and insects such as carpenter ants, yellow jackets, bees and termites. Black bears sometimes kill and eat small rodents and ungulate fawns. Unlike the brown bear, black bears like to attack and eat dead creatures, which makes humans feigning death at bear attacks ineffective. Like many animals, black bears seldom attack unless cornered or threatened. They are less likely to attack man than grizzly bears and typically run for cover before one catches sight of them. Black bear predation on man is extremely rare. It is estimated that there have been only 56 documented killings of humans by black bears in North America in the past 100 years. Black bear predators include other black bears, man, and the grizzly. Coyotes and mountain lions may prey on cubs.

Because their behavior has been little understood until recently, black bears have been feared and hated. Before the 20th century these bears were shot intermittently as vermin, food, and trophies being seen as either a vicious beast or an endless commodity. In many areas bounties were paid, until recently, for black bears. Paradoxically, black bears have also been portrayed as harmless and cuddly. For example, the "teddy bear" owes its existence to a young black bear cub Theodore Roosevelt refused to shoot.

Their tendencies to follow their stomachs and habitat encroachment by man have created human-bear conflicts. This is true especially in areas where they may have been uncommon or absent for a long time, as in many parts of the eastern United States.

Today, a major threat to the American black bear is poaching, or illegal killing, to supply Asian markets with bear galls and paws, considered to have medicinal value in China, Japan, and Korea. The demand for these parts also affects grizzly and polar bears. The Convention on International Trade in Endangered Species of Wild Fauna and Flora (CITES), a treaty among more than 120 nations, provides measures to curb illegal trade in wildlife and wildlife products across international boundaries, helping to protect the black bear from poaching.

Black bears are abundant in much of the West, in portions of the Midwest and in most of Canada. Conversely, Iowa, where land is heavily used for agriculture, has virtually none. Most eastern populations in the United States are seeing a marked, steady increase in population with bears moving back into places where they may not have been present for over a century as suitable habitat has come back. Two populations, however, are at critically low levels. Two subspecies, the Louisiana black bear and the Florida black bear, still face decline mainly due to habitat loss and degradation. In Mexico, the indigenous black bear population is listed as endangered and is mostly limited to increasingly fragmented habitat in the northern parts of the country.

In 1992, the U.S. Fish and Wildlife Service listed the Louisiana black bear subspecies as "threatened" under the Endangered Species Act, meaning it could be in danger of extinction throughout all or a significant portion of its range in the near future. The American black bear also is protected by legislation in the affected states (Louisiana, Mississippi, and Texas) due to its close resemblance to this subspecies. The Florida black bear is a candidate for protection under the Endangered Species Act.