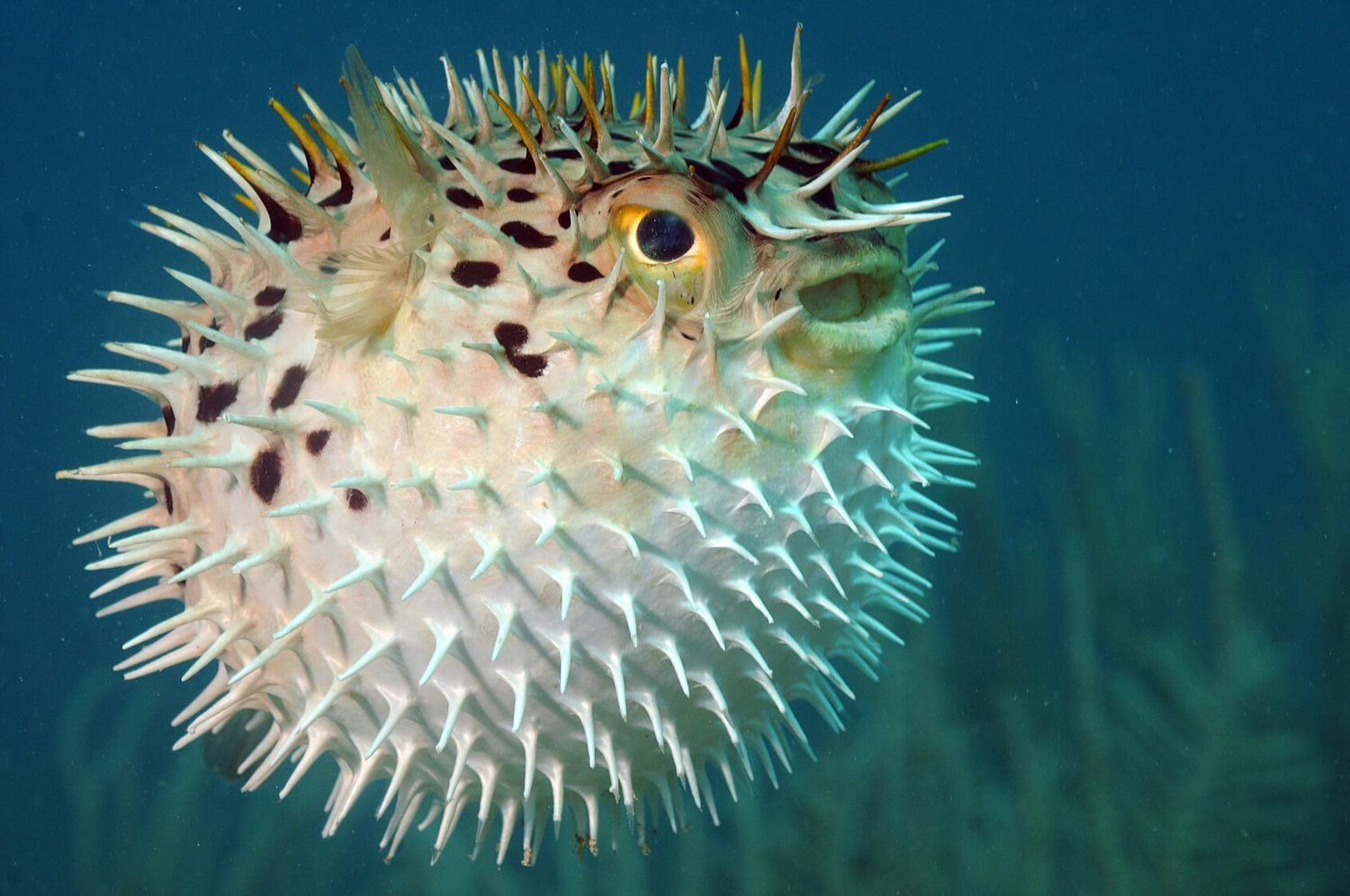 Your World Animal Foundation Adopt A Blowfish Kit comes in a Deluxe WAF Folder and includes:

Adopt A Blowfish Kits make great gifts and can be sent directly to the recipient. Simply supply the recipient's name and mailing address as shipping information. We'll even include a letter stating the Adopt An Animal Kit is from you.

Blowfish, or pufferfish, are found in tropical and subtropical ocean waters and are known for their ability to inflate to make themselves inedible to predators. Some species also have sharp spines and contain toxins to protect themselves from predators.

Blowfish are in the family Tetraodontidae, which are primarily marine and estuarine fish of the order Tetraodontiformes. They go by many names, including: blowfish, pufferfish, puffers, balloonfish, bubblefish, globefish, swellfish, toadfish, toadies, honey toads, sugar toads and sea squab. They are closely related porcupinefish, which have large external spines (unlike the thinner, hidden spines of Tetraodontidae that are only visible puffed up).

Blowfish are generally believed to be the second-most poisonous vertebrates in the world, after the golden poison frog. Certain internal organs, such as their liver and sometimes their skin, contain tetrodotoxin and are highly toxic to most animals when eaten.

There are more than 120 species of pufferfish. They are most diverse in the tropics, relatively uncommon in the temperate zone, and completely absent from cold waters. They are typically small to medium in size, although a few species can reach lengths of greater than 39 inches. Most species live in inshore and in estuarine waters. 29 species spend their entire lifecycles in fresh water.

Their tail fins are mainly used as a rudder, but can be used for a sudden evasive burst of speed. The puffer's excellent eyesight, combined with this speed burst, is the first and most important defense against predators.

A blowfish's backup defense mechanism is to fill its extremely elastic stomach with water (or air when outside the water) until it is much larger and almost spherical in shape. All pufferfish have pointed spines, so a hungry predator may suddenly find itself facing an unpalatable, pointy ball rather than a slow, tasty fish. Predators which do not heed this warning may die from choking, and predators that do manage to swallow the puffer may find their stomachs full of tetrodotoxin.

Not all blowfish are poisonous, and toxin level varies wildly even in fish that are. A puffer's neurotoxin is not necessarily as toxic to other animals as it is to humans, and pufferfish are eaten routinely by some species of fish such as lizardfish and tiger sharks.

Puffers are able to move their eyes independently, and many species can change the color or intensity of their patterns in response to environmental changes. In these respects, they are somewhat similar to the terrestrial chameleon. Although most blowfish are drab, many have bright colors and distinctive markings and make no attempt to hide from predators.

Many marine blowfish have a pelagic, or open-ocean, life stage. Spawning occurs after males slowly push females to the water surface or join females already present. The eggs are spherical and buoyant. Hatching occurs after roughly four days. Baby blowfish are very tiny, but under magnification they look similar to adult pufferfish. They have a functional mouth and eyes, and must eat within a few days.

Reproduction in freshwater species varies considerably. The dwarf puffers court with males following females. After the female accepts his advances, she will lead the male into plants or another form of cover where she can release eggs for fertilization. The male may help her by rubbing against her side.

Male pufferfish have been documented carving large geometric, circular structures in the seabed sand. The structures apparently serve to attract females and provide a safe place for them to lay their eggs.

Pollution and habitat loss threaten blowfish populations. Because they consume algae, pollution has a major impact on the food that is available to puffers. Some species are considered vulnerable enough to become endangered because of pollution.

Overfishing also threatens pufferfish populations. Blowfish flesh is considered a delicacy, despite the fact that its toxin is 1,200 times more poisonous to humans than cyanide.

Blowfish are also victims of the pet trade and animal entertainment industry. Captured from their native habitat and transported to various countries to be sold as aquarium "ornamentals", the dangers, difficulties, physical and physiological needs of the animals appears to be of no concern in the lucrative pet trade and animal entertainment industry. Removed from their natural habitat they are deprived of the ability to freely engage in instinctual behaviors. Even under the best of circumstances, captivity is cruel for fish. Confined to tiny tanks, captive fish endure constant stress and boredom. With little room to exercise, they become listless, their immune systems are weakened, and they become prone to sickness; many resort to self-mutilation in reaction to stress or boredom. Mental illness is rampant among confined animals. Torn from their families and deprived of all dignity, every part of their lives is controlled by their captors.