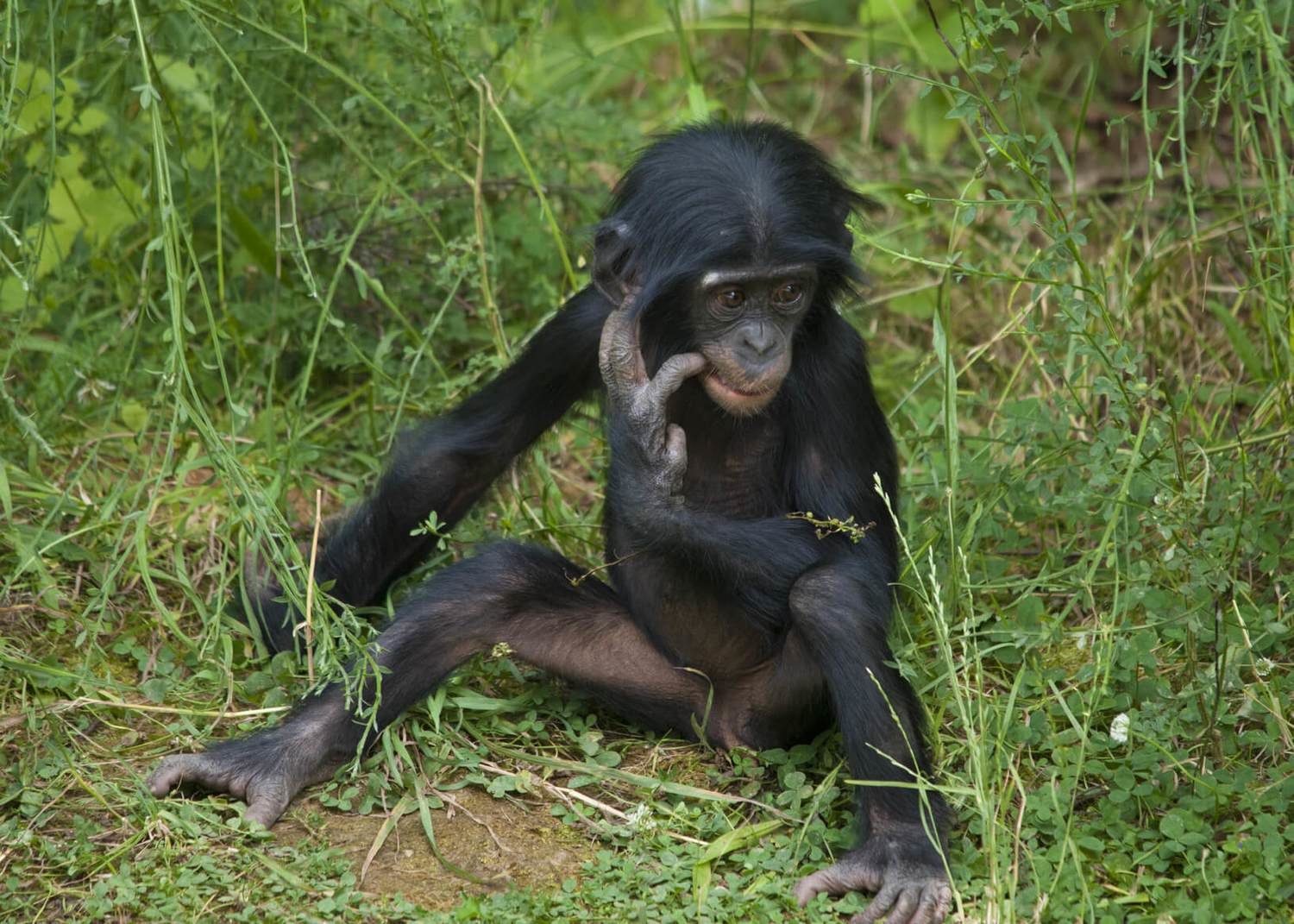 Your Adopt A Bonobo Kit comes in a Deluxe Folder and includes:

Adopt A Bonobo Kits make great gifts and can be sent directly to the recipient. Simply supply the recipient's name and mailing address as shipping information. We'll even include a letter stating the Adopt An Animal Kit is from you.

Adult female bonobos are somewhat smaller than adult males. Males range from 75 to 132 lb; females average 66 lb. The bonobo's head is relatively smaller than that of the common chimpanzee with less prominent brow ridges above the eyes. It has a black face with pink lips, small ears, wide nostrils, and long hair on its head that forms a part. The bonobo also has a slim upper body, narrow shoulders, thin neck, and long legs when compared to the common chimpanzee.

There are significant brain differences between bonobos and chimps. The brain anatomy of bonobos has more developed and larger regions assumed to be vital for feeling empathy, sensing distress in others and feeling anxiety, which makes them less aggressive and more empathic than their close relatives. They also have a thick connection between the amygdala, an important area that can spark aggression, and the ventral anterior cingulate cortex, which helps control impulses. This thicker connection may make them better in regulating their emotional impulses and behavior.

Bonobos are both terrestrial and arboreal. They travel on ground by quadrupedal knuckle walking, and occasional bipedal walking. Physical characteristics and posture give the bonobo an appearance more closely resembling that of humans than that of the common chimpanzee.

The bonobo also has highly individuated facial features, as humans do, so that one individual may look significantly different from another, a characteristic adapted for visual facial recognition in social interaction.

The bonobo is an omnivorous frugivore; 57% of its diet is fruit, but this is supplemented this with leaves, honey, eggs, meat from small vertebrates, and invertebrates.

Bonobos are capable of altruism, compassion, empathy, kindness, patience, and sensitivity. Females have a higher social status in bonobo society. Females have strong social bonds amongst themselves, but they do not exclude males. Aggressive encounters between males and females are rare, and males are tolerant of infants and juveniles. A male derives his status from the status of his mother. The mother–son bond often stays strong and continues throughout life. While social hierarchies do exist, rank plays a less prominent role than in other primate societies.

Bonobo party size tends to vary. A community of approximately 100 will split into small groups during the day while looking for food, and then will come back together to sleep. They sleep in nests that they construct in trees. Bonobos have a male philopatric society; males remain with their birth group whereas females migrate to other groups during adolescence.

Daily activities of bonobos includes feeding in trees, travel, foraging, nest-building, rest, and group excitement. Bonobos travel 13% of the day, forage 20% of the day, feed 20% of the day, and rest about 43% of the day. The remaining time is spent doing other various activities. The average daily travel distance of a bonobo is 1.24 miles.

Sexual activity generally plays a major role in bonobo society, being used as a greeting, a means of forming social bonds, a means of conflict resolution, and postconflict reconciliation. Bonobos do not form permanent monogamous sexual relationships. They also do not seem to discriminate in their sexual behavior by sex or age, with the possible exception of abstaining from sexual activity between mothers and their adult sons. When bonobos come upon a new food source or feeding ground, the increased excitement will usually lead to communal sexual activity, presumably decreasing tension and encouraging peaceful feeding. Bonobos prefer sexual contact over violent confrontation with outsiders. They are known to be extraordinarily peaceful, and often resolve conflicts with sexual contact.

The gestation period of bonobos is on average 240 days. Female bonobos carry and nurse their young for four years and give birth on average every 4.6 years.

Bonobos communicate primarily through vocal means. They are the most vocal of the great apes, using complicated patterns of vocalizations to communicate detailed information. Humans are able to easily understand their facial expressions and some of their natural hand gestures, such as their invitation to play.

Bonobos are known for using tools, including using leaves as cover for rain and brandishing branches in social displays. They make a new nest for sleeping each night, and sometimes construct a nest during the day. Most nests are made in trees, but occasionally ground nests are constructed. As seed dispersers, bonobos play an important ecological role in forest regeneration.

Bonobos typically live 40 years in captivity; their lifespan in the wild is unknown.

It is estimated there are between 29,500 and 50,000 bonobos. The species is listed as Endangered on the IUCN Red List and is threatened by habitat destruction and human population growth and movement. The bonobo population is believed to have declined sharply in the last 30 years. Because bonobos only bear offspring every 4 to 5 years, the population is slow to regenerate.

Bushmeat hunting is the greatest threat to bonobos. 90% of humans in the region where bonobos live can only afford to eat one meal a day. They are increasingly turning to wild sources of meat for sustenance. They also hunt bonobos for profit in the commercial bushmeat trade.

The Congo is setting aside more than 11,000 square miles of rainforest to help protect the endangered bonobo, and U.S. agencies, conservation groups, and the Congolese government have come together to set aside 11,803 square miles of tropical rainforest. However, a reserve may need to be established in a more stable part of Africa, or on an island in a place such as Indonesia, to save bonobos.