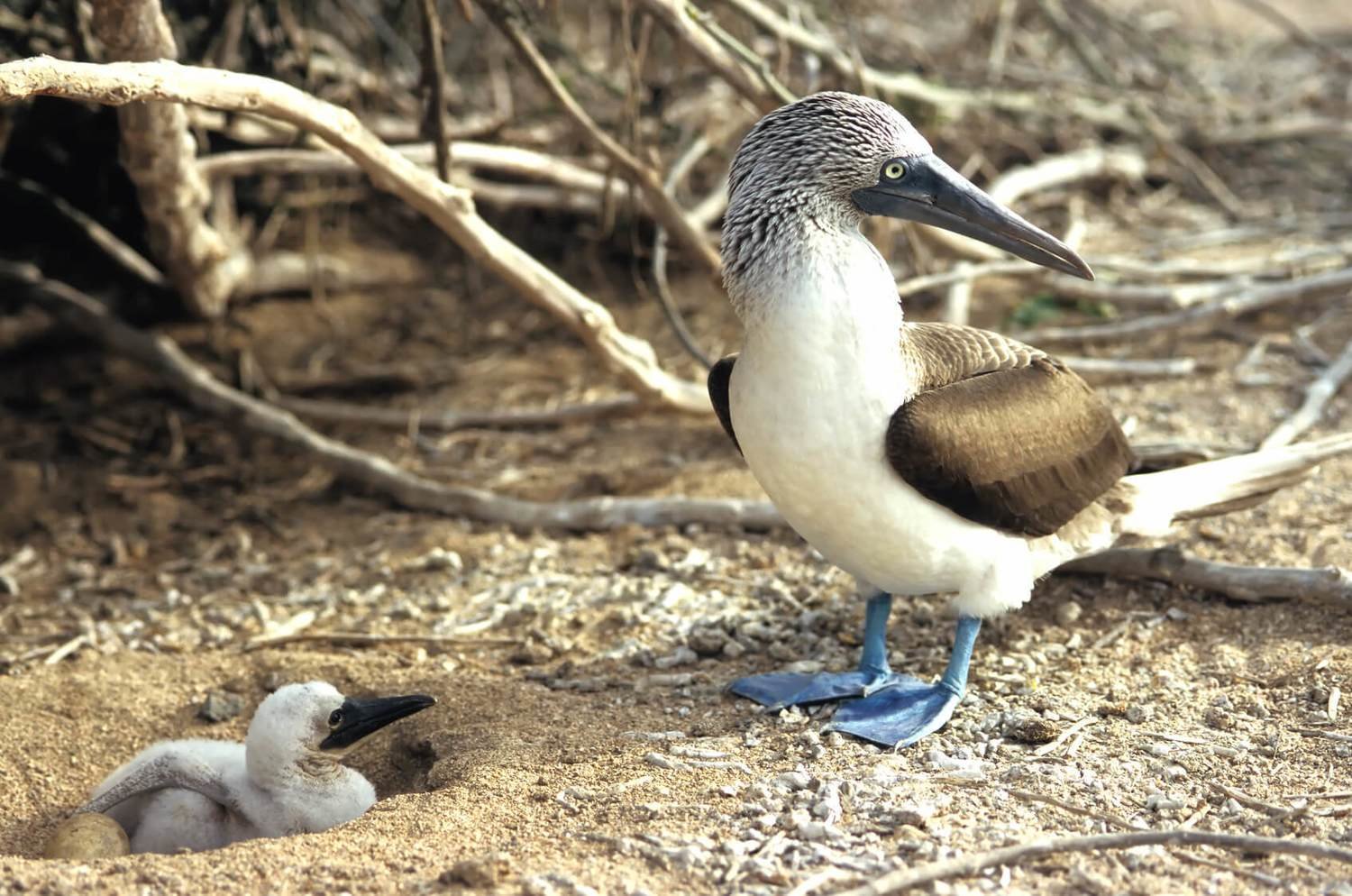 Your World Animal Foundation Adopt A Booby Kit comes in a Deluxe WAF Folder and includes:

Adopt A Booby Kits make great gifts and can be sent directly to the recipient. Simply supply the recipient's name and mailing address as shipping information. We'll even include a letter stating the Adopt An Animal Kit is from you.

A booby is a seabird in the genus Sula, part of the Sulidae family. The bird family Sulidae also includes gannets. Collectively called sulids, they are medium-large coastal seabirds that plunge-dive for fish and similar prey. Sulids are distributed mainly in tropical and subtropical waters. Gannets are also found in temperate regions. They usually stay close to the coasts.

Sulids measure about 24 to 33 inches in length and have a wingspan of about 4.59 to 5.74 feet. They have long, narrow and pointed wings, and a quite long, graduated, lozenge-shaped tail with outer feathers shorter than the central ones. Their flight muscles are small to allow for the small cross section required for plunge-diving, and thus their wing loading is high. Consequently, they are very streamlined, reducing drag. Their bodies are "torpedo-shaped" as well as somewhat flat.

Boobies have stout legs and webbed feet, with the web connecting all four toes. In some species the webs are brightly colored and used in courtship displays. Booby bills are usually conspicuously colored, long, deep at the base, and pointed with saw-like edges. The upper mandible curves down slightly at the tip and can be moved upward to accept large prey. To keep water out during plunges, their nostrils enter into the bill rather than opening to the outside directly. Boobies eyes are angled forward, and provide a wider field of binocular vision than in most other birds.

The plumage of boobies is either all-white (or light brownish or greyish) with dark wingtips and tail, or at least some dark brown or black above with white underparts. Gannets have a yellowish hue to the head.

Booby faces usually have some sort of black markings. They have a well-developed preen gland whose waxy secretions they spread on their feathers for waterproofing and pest control. They moult their tail feathers irregularly, and molt their flight feathers in stages, so they always have some old feathers, some new feathers, and some partly grown feathers.

The blue-footed booby is easily recognizable by its distinctive bright blue feet, which can range in color from a pale turquoise to a deep aquamarine. Males and younger birds have lighter feet while females have darker feet. Their blue feet play a key role in courtship rituals and breeding, with the male visually displaying his feet to attract mates during the breeding season by stamping them on the ground in a dance-like fashion. The brightness of their feet decreases with age, so females tend to mate with younger males with brighter feet who have higher fertility and increased ability to provide paternal care than do older males.

The red-footed booby has bright, red feet that are a pinkish color when the booby is young. The Peruvian booby is not as elaborate in appearance as other booby species. The masked booby has a distinguishable black color around it's eyes and is the largest species of booby. The brown booby is a smaller booby and with a black head and back, a white belly, short wings and a long tail. The Nazca booby has a more rounded head than the other species of booby, with a white body and a beak that is yellow or orange.

Boobies hunt fish by diving from a height into the sea and pursuing their prey underwater. Facial air sacs under their skin cushion the impact with the water. All species feed entirely at sea, mostly on mid-sized fish and similarly-sized marine invertebrates. Many species feed communally, and some species follow fishing boats to scavenge discarded bycatch and chum. The typical hunting behavior is a dive from mid-air, taking the bird under water. If prey manages to escape the diving birds, they may give chase using their legs and wings for underwater swimming.

Before taking off, sulids will point their bills upwards (gannets) or forward (boobies). After landing again, they point downwards with the bill. In response to a threat they will not attack but shake their heads and point the bill towards the intruder.

Boobies are colonial breeders on islands and coasts. They normally lay one or more chalky-blue eggs on the ground or sometimes in a tree nest. Males examine the colony area in flight and then pick a nest site, which they defend by fighting and by territorial displays. Males then advertise to females by a special display and call. The display behavior typically includes the male shaking his head. Females search the colony in flight and on foot for a mate. Once they select males, pairs maintain their bonds by preening each other and by frequent copulation.

The clutch is typically two eggs. The eggs are unmarked (but may become stained by debris in the nest), whitish, pale blue, green or pink, and have a coating that resembles lime. Incubation lasts 42 to 55 days, depending on the species. Both sexes incubate; their feet become vascularized and hot, and the birds place the eggs under the webs. Eggs lost during the first half of incubation are replaced.

At hatching, parents move the eggs and then the hatchlings to the tops of their webs. The young hatch naked, but soon develop white down. They beg by touching the parent's bill and take regurgitated food straight from their gapes. At first at least one parent is always in attendance of the young; after two weeks, both parents leave the nest unguarded at times while they go fishing. The amount of time for the chicks to fledge and become independent of their parents depends greatly on the food supply.

Boobies communicate with grunts or shouts and whistling noises. The males of the species have been known to throw up their head and whistle at a passing, flying female. Mates can recognize each other by their calls.

Boobies are threatened by habitat loss and egg collecting. Booby food sources are also over-fished by the commercial fishing industry.