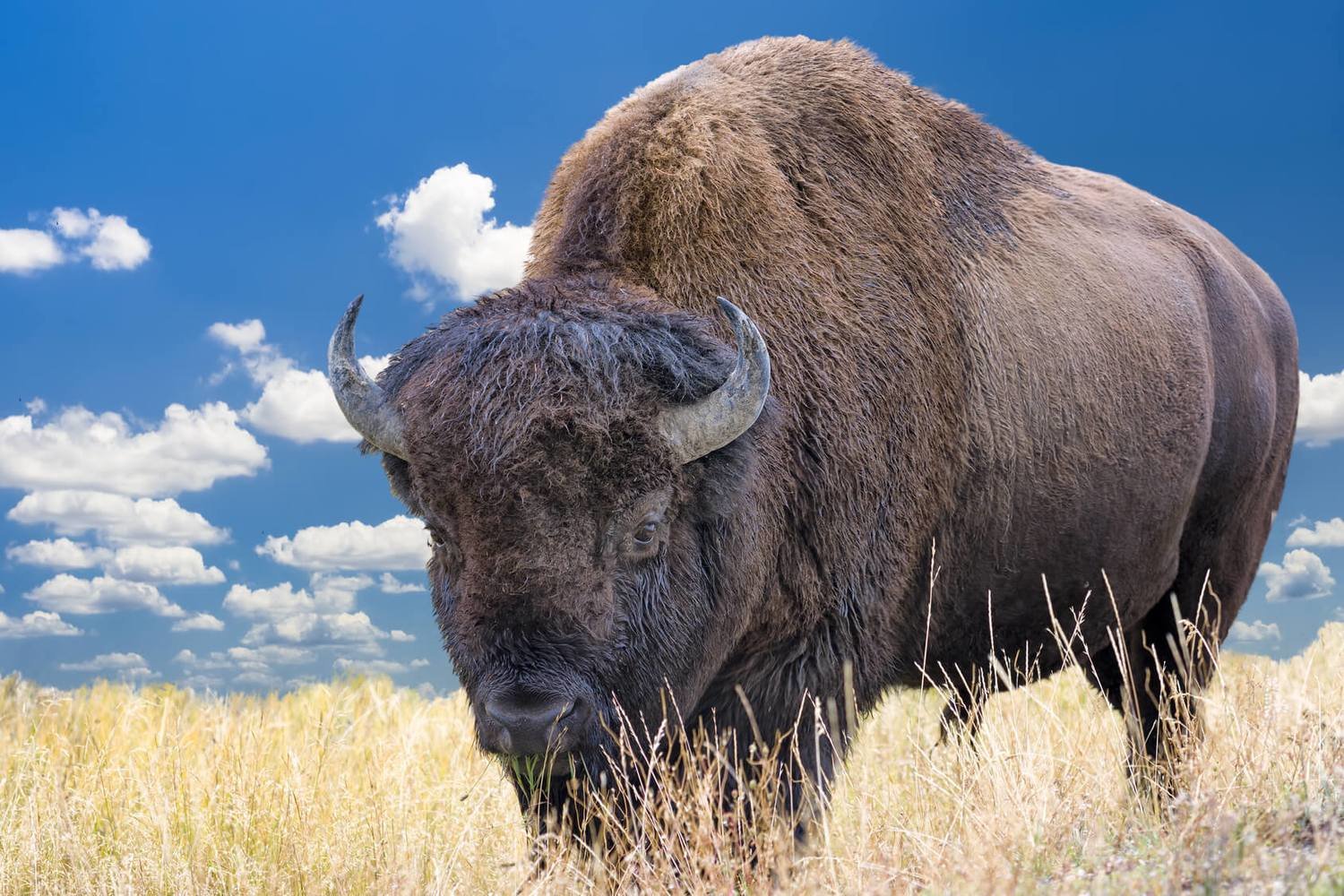 Your World Animal Foundation Adopt A Buffalo Kit comes in a Deluxe WAF Folder and includes:

Adopt A Buffalo Kits make great gifts and can be sent directly to the recipient. Simply supply the recipient's name and mailing address as shipping information. We'll even include a letter stating the Adopt An Animal Kit is from you.

A symbol of the wild west, the American buffalo is the heaviest land mammal in North America. Also called the American bison, the buffalo has a large head with relatively small, curving horns. It has a shaggy coat of brown hair on its shoulders and legs, while its body has shorter, finer hair. Bison are 5 to 6½ feet long and weigh 900 to 2,200 pounds. Males are larger than females on average.

Historically, buffalo numbered an estimated 20 million to 30 million. Today, approximately 250,000 remain in the United States. Of those, only 16,000 roam in the wild. Yellowstone National Park has the only population of free-roaming buffalo.

Buffalo typically live between 12 to 15 years and inhabit the Great Plains, prairies and forests. Buffalo eat grasses and sedges, moving continuously as they eat so that they rarely overgraze an area.

Buffalo live in herds of 20 to 50 animals. The females, or cows, lead family groups. Bulls (males) remain either solitary or in small groups for most of the year. Buffalo travel as a group and roam great distances in the wild. They can reach speeds of up to 30 mph.

Females produce one calf after a gestation period of nine and a half months. Calves are born in late April to mid-May. The cow protects the young. The offspring may remain with the mother for as long as three years after birth.

Shooting buffalo for their hides was a favorite frontier sport in the 19th century. Hunters practically eliminated the bison by 1890. In 1893, the first efforts were made to protect the animals. Today, the buffalo of Yellowstone National Park face the threat of slaughter when they exit the park and enter the state of Montana.

Along with the bald eagle, the buffalo perhaps best symbolizes the spirit of American wilderness. While many people are aware that both animals teetered on the brink of extinction in the past due to human encroachment, few realize that wild bison continue to be the victims of a calculated, annual slaughter in the Greater Yellowstone Area.

During the mid to late 1800s, government agents orchestrated one of the most aggressive and wanton animal massacres in history, killing buffalo indiscriminately in an attempt to subjugate Native Americans. With the addition of market hunters and settlers killing bison for profit and for fun, America's wild buffalo herds were reduced from an estimated 60 million to perhaps as few as 100. With the establishment of Yellowstone National Park in 1872 and the National Park Service in 1916, the 25 buffalo remaining in the Park finally were afforded some protection. Initially, management policies allowed for the active manipulation of populations by culling what was perceived as "surplus" animals. But eventually, the management strategy evolved to an approach which permitted natural regulation to occur, for the most part letting nature take its course rather than relying on human intervention.

This was good news for the buffalo, but sadly their fortune was short lived. Since the mid 1980s, more than 3,000 buffalo have been massacred under the supervision of government officials bowing to the pressures of the livestock industry and its cohorts. The livestock industry and federal and state livestock agencies contend that buffalo can transmit the Brucella abortus bacteria to cattle under natural conditions. In reality, there has never been a documented case of this occurring. Despite this fact, they continue to wage a war against Yellowstone buffalo.

In 1917, officials discovered that some Yellowstone buffalo were infected with Brucella abortus, the bacteria which causes the disease brucellosis in domestic cattle. In cattle, the disease produces spontaneous abortions, but buffalo do not appear to be similarly affected. In fact, over the past 80 years in the entire Greater Yellowstone Area, there have been only four documented buffalo abortions, which may or may not have been caused by the bacteria.

Over the past decade, buffalo have been emigrating from the Park over its northern and western boundaries into the state of Montana during winter months. Because of several mild winters, and the National Park Service's continued grooming of snowmobile trails which makes it easier for buffalo to exit the Park, more and more buffalo have been stepping hoof over Park boundaries.

The U.S. Forest Service issues grazing permits on lands adjoining Yellowstone National Park, generally for the months of June through October. Cattle grazing is even allowed in Grand Teton National Park. The interests of wildlife, and not cattle, should take precedence on public lands. The grazing allotments should be either closed or modified to minimize any contact between buffalo and cattle. Also, mandatory vaccination of domestic calves against brucellosis within the counties surrounding the Park could further reduce the risk, if any risk exits at all, of infection. Currently, vaccinations are not mandatory in Montana or Wyoming.

In addition to buffalo, elk can also be infected with the bacteria and can carry the disease. With more than 90,000 elk in the Greater Yellowstone Area, the likelihood of eliminating the bacteria using available technologies is virtually nonexistent. Moreover, if all infected buffalo were destroyed, exposure to elk would result in reinfection in the remainder.

This is particularly a problem in Wyoming where over 23,000 elk congregate on artificial feedgrounds, creating prime conditions for bacteria transmission. In fact, buffalo from Grand Teton National Park, just south of Yellowstone, have discovered the "free meals" being provided on the National Elk Refuge each winter in the Jackson Hole area. It is speculated that this herd of buffalo contracted the bacteria from elk on the feedground.

State officials rarely admit that elk may also carry the disease. Elk, of course, are a prime money maker for Montana and Wyoming state officials, who encourage propagation of elk herds so they can profit from the sale of sport hunting licenses.

Ironically, buffalo are being targeted allegedly to protect the livestock industry, but the general consensus among scientists is that cattle probably introduced the bacteria into the Yellowstone buffalo herd shortly before 1917.