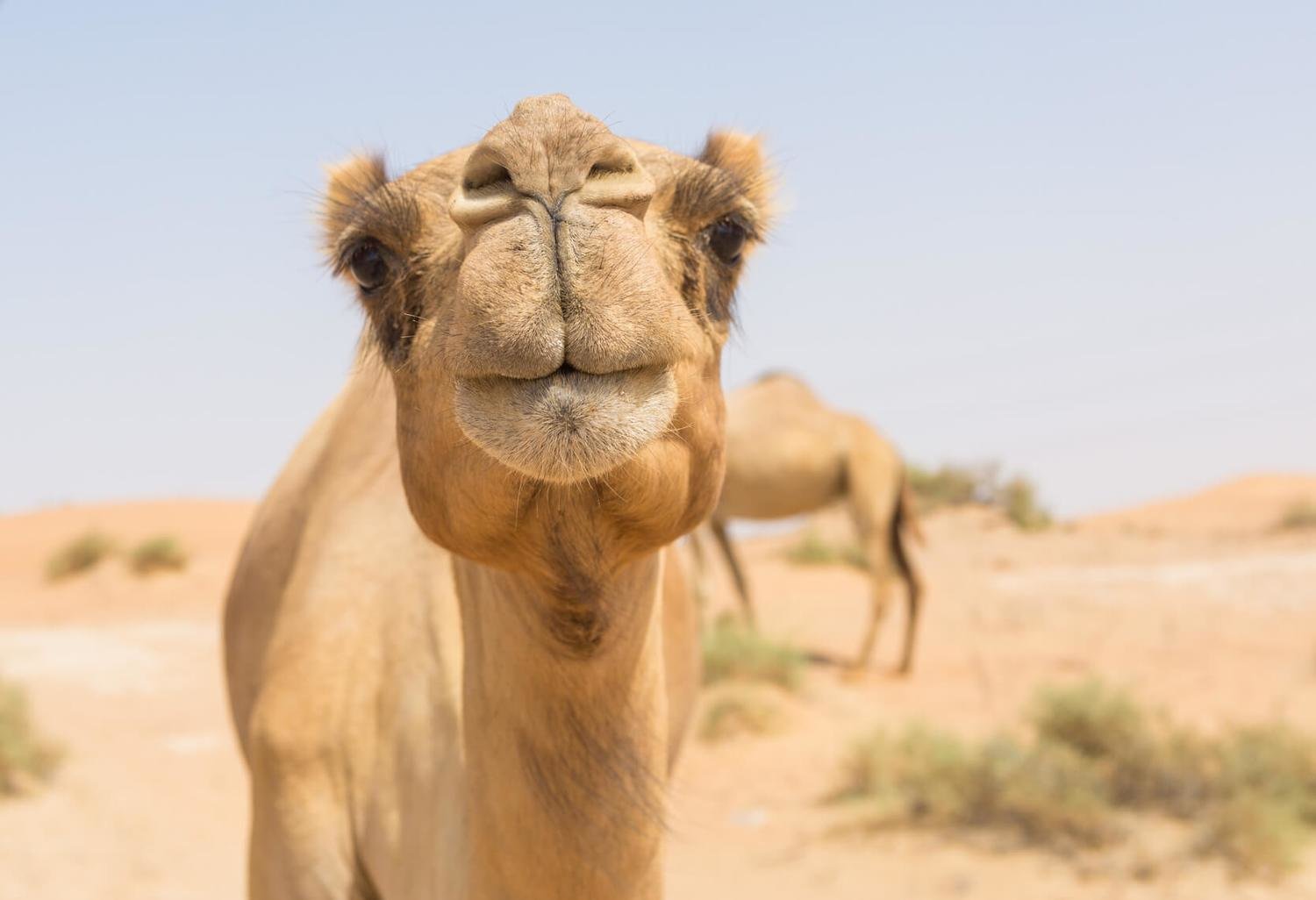 Your World Animal Foundation Adopt A Camel Kit comes in a Deluxe WAF Folder and includes:

Adopt A Camel Kits make great gifts and can be sent directly to the recipient. Simply supply the recipient's name and mailing address as shipping information. We'll even include a letter stating the Adopt An Animal Kit is from you.

A camel is either of the two species of large even-toed ungulate in the genus Camelus. The Dromedary is a single hump camel, and the Bactrian Camel is a double hump camel. Both are native to the dry and desert areas of Asia and northern Africa. The average life expectancy of a camel is 30 to 50 years. Humans first domesticated camels approximately 5,000 years ago.

Although there are almost 13 million Dromedaries alive today, the species is extinct in the wild. There is, however, a substantial feral population in central parts of Australia, descended from individuals that escaped from captivity in the late 19th century. The Australian government has culled more than 100,000 of the animals, claiming the camels use too much of the limited resources needed by sheep farmers.

The Bactrian Camel once had an enormous range, but is now reduced to an estimated 1.4 million animals, mostly domesticated. It is thought that there are about 1,000 wild Bactrian Camels in the Gobi Desert, and small numbers in Iran, Afghanistan, Turkey and Russia.

A small population of introduced camels, Dromedaries and Bactrians, survived in the Southwest United States until the 1900s. These animals, imported from Turkey, were part of the US Camel Corps experiment, used as draft animals in mines, and escaped or were released after the project fell through.

Bactrian camel have two humps and are rugged cold-climate camels, while Dromedaries have one hump and are desert dwellers. Dromedary hybrids are called Bukhts. The females can be mated back to a Bactrian to produce ¾-bred "riding camels". These hybrids are found in Kazakhstan. The Cama is a camel/llama hybrid bred by scientists with short ears and the long tail of a camel, no hump and Llama-like cloven hooves rather than the Dromedary-like pads.

Camels are well known for their humps. They do not, however, literally store water in them as is commonly believed; though they do serve this purpose through roundabout means. Their humps are a reservoir of fatty tissue, while water is stored in their blood. However, when this tissue is metabolized, it is not only a source of energy, but yields water through reaction with oxygen from the air. This allows them to survive without water for about two weeks, and without food for up to a month.

A camel's red blood cells have an oval shape, unlike those of other mammals, which are circular. This is to facilitate their flow in a dehydrated state. These cells are also more stable so they do not rupture when drinking large amounts of water.

Camels are able to withstand changes in body temperature and water content that would kill most other animals. Their temperature ranges from 93 degrees F at night, up to 106 degrees F at day; only above this threshold they start to sweat. This allows them to preserve about five liters of water a day. However, they can withstand at least 25% weight loss due to sweating.

The camel's thick coat reflects sunlight. A shaved camel has to sweat 50% more to avoid overheating. Their coat also insulates them from the intense heat that radiates from hot desert sand. Their long legs also help by keeping them further away from the sand.

The camel's mouth is very sturdy, able to eat thorny desert plants. Long eyelashes and ear hairs, together with sealable nostrils, prevent sand from entering. Their pace (always moving both legs of one side at the same time), and their widened feet, help them move without sinking in.

Many desert based countries have a tourist industry offering camel back rides and treks. Hotels and travel agents also offer these unethical excursions. They force camels to carry tourists in extreme conditions all in the name of profit. The camels are often poorly treated and housed in unacceptable conditions. Sick, old, injured and physically exhausted camels are forced to work. Humans are often far too heavy for the camels, but income is valued over the welfare of the animal.

Camels are also sold for slaughter, inhumanely fattened before sale. They are beaten with wooden sticks, ill-cared for and their skin is scarred from repeated beating. One of their legs is kept tied up to prevent them from escaping.

Camel wrestling is a cruel "sport" where two male camels are forced to wrestle, typically in response to a female in heat being led before them. Most common in the Aegean region of Turkey, camel wrestling also takes place in other parts of the Middle East and South Asia. The government of Turkey began discouraging the practice in the 1920s, but began promoting the inhumane practice again in the 1980s as part of Turkey's "historic culture."

Circus camels are doomed to a life of misery, spending most of their lives in tiny enclosures. Their natural needs are never met and they live in constant stress. Camels are also forced to provide rides at fairs and festivals, tethered tightly to turnstiles and made to plod in endless circles. They suffer from numerous ailments and emotional issues.

Even under the best of circumstances, captivity is cruel for camels. Confined to tiny areas and gawked at by crowds, animals in exhibits and acts endure constant stress. They may suffer from temperature extremes and irregular feeding and watering. Without exercise, they become listless, their immune systems are weakened, and they become prone to sickness; many resort to self-mutilation in reaction to stress or boredom. Mental illness is rampant among confined animals. Torn from their families and deprived of all dignity, every part of their lives is controlled by their captors.