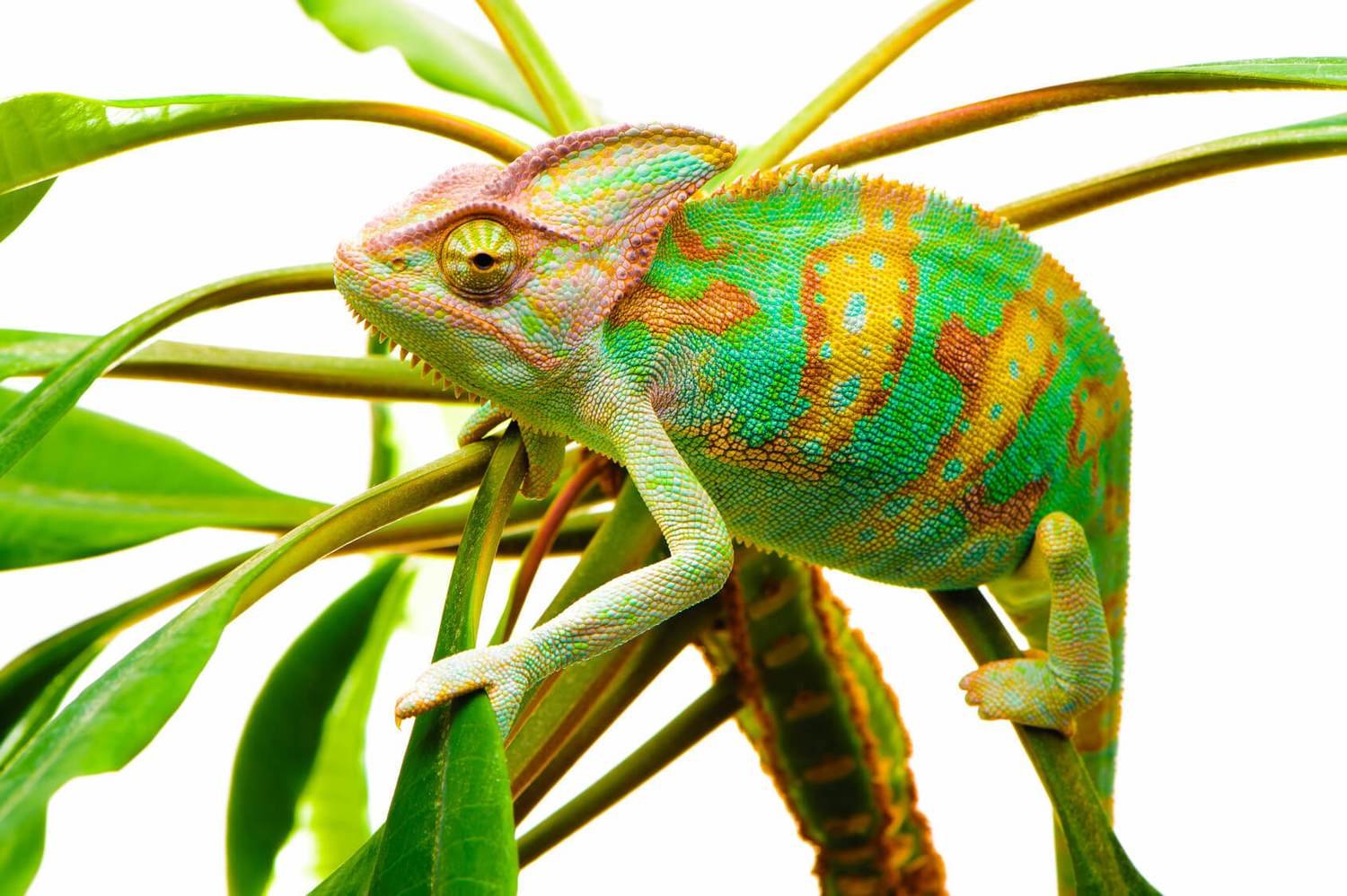 Your Adopt A Chameleon Kit comes in a Deluxe Folder and includes:

Adopt A Chameleon Kits make great gifts and can be sent directly to the recipient. Simply supply the recipient's name and mailing address as shipping information. We'll even include a letter stating the Adopt An Animal Kit is from you.

True old world lizards with evolutionary roots that date back as far as 61 million years ago; chameleons are some of the most unique reptiles on earth. There are around 180 different species of chameleon belonging to the family Chamaeleonidae, which can come in a myriad and dazzling range of colors and sizes. Many species have the astounding ability to change colors in order to blend into their environment.

Naturally preferring warm climates, chameleons live in habitats that range from rainforest to dry desert, and chameleons have been found to occur, depending on species, in Africa, Madagascar, Europe, and southern Asia (as far as Sri Lanka). The word chameleon derives from Latin and Greek languages, roughly meaning ‘lion of the ground.’

It’s difficult to even begin to describe a chameleon’s curious appearance. They can range from 0.6 inches up to 27.5 inches in length, and their size and body structure can be very different from species to species. Some have unique decorative features, such as horn-like nasal protrusions or crests on top of their heads, while others have crests of small spikes along their spine that help break up the outline of the chameleon so it blends into its surroundings. The males of many chameleon species tend to be more decorative than the females.

Since most chameleons are tree dwellers, they have developed prehensile (grasping) tails and a highly functional foot structure, often referred to as a zygodactyl foot. On each of their feet, the toes are grouped into either two or three separate, flattened bundles, which give the feet the appearance of tongs. These specialized feet allow chameleons to grip tightly onto narrow branches, and the sharp claws at the end of each toe help these little lizards to readily climb rough surfaces like bark. Even those species that have moved to more terrestrial movement have kept the same toe structure as their tree-top dwelling counterparts.

Continuing to break the mold when it comes to unusual animals, chameleons also have the most distinctive eyes of any reptile. Their upper and lower eyelids don’t move separately, but are completely joined together, leaving only a pinhole opening large enough for the pupil to see through. A chameleon can keep just one eye on you while watching a tasty bug at the same time. Each eye can move, pivot and focus in complete independence, giving them a 360 degree field of vision. In addition, their actual eyesight is excellent in comparison to other reptiles, allowing them to see their prey from as far as 5 to 10 meters away. Their eyes can also detect both visible and ultraviolet light – in fact, ultraviolet exposure plays an important role in regulating a chameleon’s social, feeding, and reproductive activities.

The most renowned characteristic belonging to many species of chameleon is their ability to change their skin color and pattern, usually in combinations of pink, blue, red, orange, black, brown, light blue, yellow, turquoise or purple. Chameleons have two layers within their skin structure, placed on top of one another, that control color change by using a lattice of a substance called guanine nanocrystals. When the chameleon’s body ‘excites’ the lattice, the distance between the nanocrystals increases, changing which wavelengths of light are reflected and absorbed by their skin (therefore changing their color and pattern).

Chameleons will change color not only to camouflage, but also to communicate with others in social situations like courting before mating, or conflict. One species, the Namaqua chameleon, changes color in order to help regulate its body temperature too, turning black in cooler weather to absorb heat, and then lighter grey to reflect light in warmer daytime temperatures. In general, a chameleon will usually show darker colors if they’re angry or trying to scare off other chameleons or animals, but shows lighter and more multicolored patterns when they’re courting to mate.

In order to fuel all of this brilliant body structure, chameleons need to be fairly efficient hunters. They eat mainly insects, though some larger species will also hunt other lizards and sometimes even small birds, catching them by rapidly projecting their long, sticky tongue to capture their prey from afar and bring it into their mouth to eat. Some chameleons can actually project their tongues more than twice the distance of their own body length, and can capture prey in as fast as 0.07 seconds. Many chameleon species will also munch on tender leaves, plant shoots and berries as well to supplement their diet.

Chameleons are mainly external egg-layers (oviparous), though some species retain eggs inside their body until they are ready to hatch (oviviparous). Chameleons who lay eggs will do so three to six weeks after mating, digging a hole in the ground to lay anywhere from two to two hundred eggs, depending on the particular sizes and species. Although eggs of these chameleons generally hatch after 4 to 12 months, the eggs of one species, the Parson’s chameleon, are believed to have an extremely long gestation period of over 24 months.

Oviviparous species, on the other hand, have a gestation period of five to seven months, after which the mother chameleon presses each sticky-surfaced egg onto a branch. The egg membrane then bursts, freeing the new young chameleon to move away, hunt, and hide from predators. An oviviparous female can have up to 30 live young from one gestation period.

There are several species of chameleons that are inhumanely kept in captivity. Every year, a variety of sources provides millions of animals to the exotic pet trade. Animals are captured from their native habitat and transported to various countries to be sold as “pets”. Others are surplus animals from zoos or their offspring. Backyard breeders also supply exotic animals. The sellers of these animals often disregard state or local laws regulating private possession of exotics, and the dangers, difficulties, physical and physiological needs of the animals they peddle. The suffering of the animals in the hands of unqualified and hapless buyers appears to be of no concern in the lucrative exotic pet trade. Reptiles pose safety risks to humans. Many incidents have been reported of escapes, strangulations, and bites from pet reptiles across the country.

Many species of chameleons are threatened with extinction in their natural habitats because of human pollution and deforestation.

These small lizards can also be host to a number of different parasites as well; nematode worms and protozoan parasites like Plasmodium (the parasite that causes malaria) and coccidia have all been noted to be carried by various chameleon species.