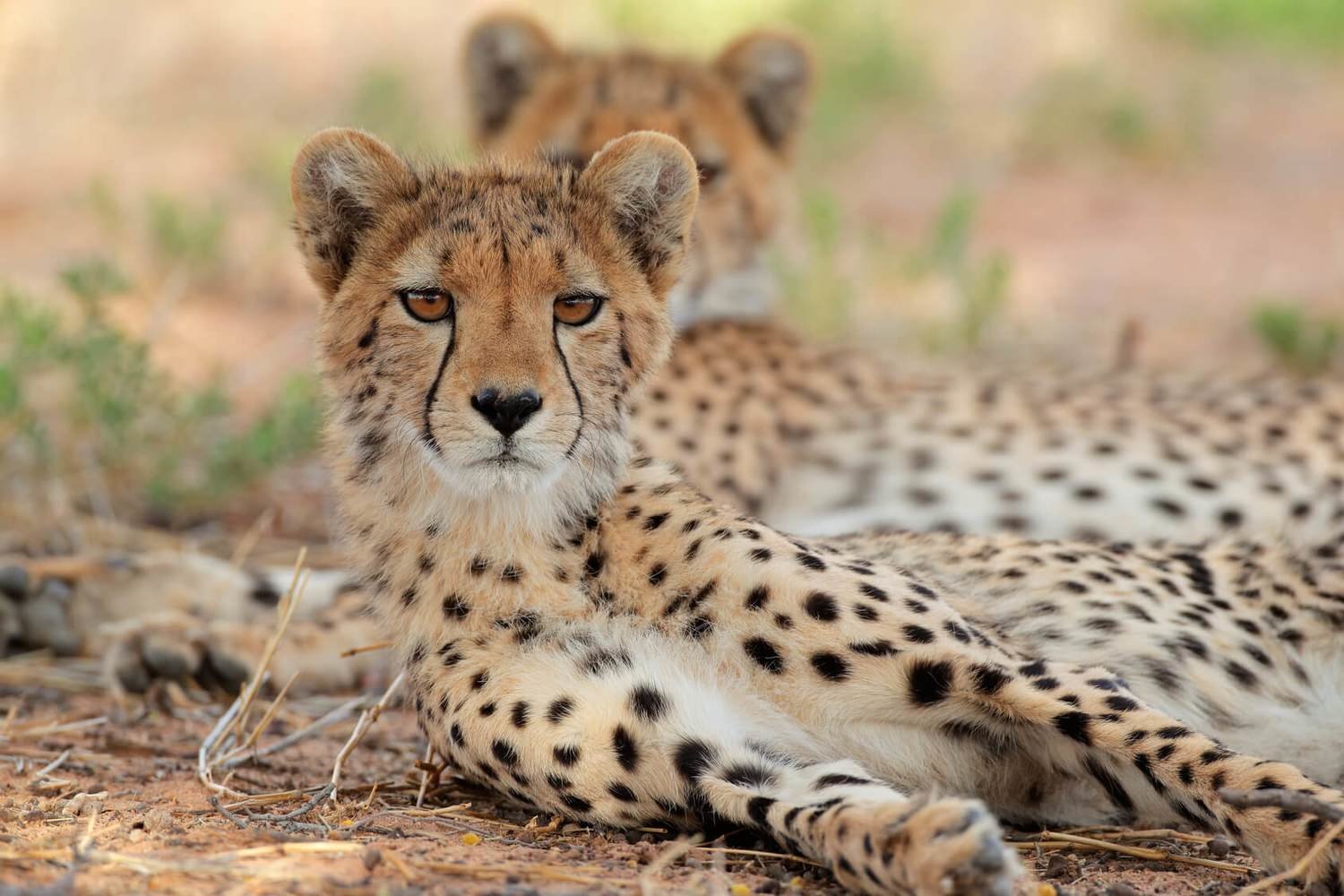 Your World Animal Foundation Adopt A Cheetah Kit comes in a Deluxe WAF Folder and includes:

Adopt A Cheetah Kits make great gifts and can be sent directly to the recipient. Simply supply the recipient's name and mailing address as shipping information. We'll even include a letter stating the Adopt An Animal Kit is from you.

The fastest land animal in the world, the cheetah is a marvel of evolution. Capable of running up to 70 miles per hour, the cheetah’s slender, long-legged body is built for speed. Its spotted coat, small head and ears, and distinctive "tear stripes" from the corner of the eyes down the sides of the nose make the cheetah highly recognizable among the large cats of Africa.

The cheetah is smaller than other big cats, measuring 44 to 53 inches long with a tail length of 26 to 33 inches. Cheetahs usually weigh 110 to 140 pounds. An estimated 9,000 to 12,000 cheetahs remain in the wild. They live an average of 10 to 12 years. Once found throughout Africa and Asia, cheetahs are now confined to parts of eastern and southwestern Africa.

Cheetahs thrive in areas with vast expanses of land where prey is abundant. In Namibia cheetahs have been found in a variety of habitats, including grasslands, savannahs, dense vegetation, and mountainous terrain. Ninety five percent live on commercial farms. Cheetahs are found in the wild primarily in Africa, but in the past their range extended into northern and southern India. Conservationists using camera traps have recently discovered surviving populations in Iran and are taking steps to protect them. In much of their former range they were domesticated by aristocrats and used to hunt antelopes in much the same way as is still done with members of the greyhound group of dogs. Aside from an estimated 200 cheetahs living in Iran (Khorasan Province), the distribution of cheetahs is now limited to Africa. There are 5 subspecies of cheetah in the genus Acinonyx: four in Africa and one in Iran. The endangered subspecies Acinonyx jubatus venaticus lives in Asia (Iran). In 1990, there were reports in the Times of India of a cheetah sighting in eastern India. There is a chance some cheetahs remain in India, though it is doubtful. There have also been reports of Asiatic cheetahs in the Balochistan Province of Pakistan, though these continue to be unverified. The cheetah prefers to live in an open biotope, such as semi desert, prairie, and thick brush.

Cheetahs rely on a burst of speed to catch such swift prey as gazelles, wildebeest calves, impalas and smaller hoofed animals, knocking their prey to the ground and delivering a suffocating bite to the neck. They must eat quickly to avoid losing their kill to other carnivores.

Cheetahs are typically solitary creatures. Females raise their cubs for about a year. Males sometimes live with a small group of brothers from the same litter. Cheetahs hunt in late mornings and early evenings. Chases last from 20 to 60 seconds. Only half are successful. Cheetahs reach sexual maturity in 20 to 24 months. Mating season is throughout the year. The cheetah can live over twenty years, but their life is often short, for they lose their speed with old age. Unlike other felines, the adult females do not have true territories and seem to avoid each other, though some mother/daughter pairs have been known to continue for small periods of time. Cheetahs have a unique, well structured social order. Females live alone except when they are raising cubs. The females raise the cubs on their own. The first 18 months of a cub's life are important; cubs learn many lessons because survival depends on knowing how to hunt wild prey species and avoid other predators such as leopards, lions, hyenas, and baboons. At 18 months, the mother leaves the cubs, which then form a sibling group, that will stay together for another 6 months. At about 2 years, the female siblings leave the group, and the young males remain together for life. Males live alone or in coalitions made up of brothers from the same litter. Some coalitions maintain territories in order to find females with which they will mate. Territories are often located in areas where there is a rich supply of wild game and/or water. Fierce fights between male coalitions, resulting in serious injury or death, can occur when defending territories. Coalitions of many male cheetahs are much more successful at winning and keeping territories than the ones who live alone. Life span is up to 12 years in wild.

Two to four cubs are born to a litter. Cubs are smoky grey in color with long wooly hair, called a mantle, running along their backs. This mantle is thought to help camouflage cubs in grass, concealing them from predators. Mothers move cubs to new hiding places every few days. At five to six weeks, cubs follow the mother and begin eating from her kills. Cubs stay with their mother for about a year.

The future of the cheetah is doubtful because of increasing loss of habitat, declines in prey, high cub mortality rates and conflict with ranchers. Cheetah fur was formerly regarded as a status symbol.

Today, cheetahs have a growing economic importance for ecotourism and they are also found in zoos, denied their wild nature, strong family bonds and natural social interactions. Like all captive wildlife, they face constant stress and are denied their wild nature and social structures. The needs and desires of humans comes before the needs of the animals in the animal entertainment industry.

Because cheetahs are far less aggressive than other big cats, kittens are sometimes sold as pets. This is an illegal trade, because international conventions forbid private ownership of wild animals or species threatened with extinction. Their complex physical, psychological and social needs can never be met when they are kept as pets.

Cheetahs were formerly, and are sometimes still, hunted because many farmers believe that they eat livestock. When the species came under threat, numerous campaigns were launched to try to educate farmers and encourage them to conserve cheetahs. Recent evidence has shown that if cheetahs can avoid it they will not attack and eat livestock, preferring their wild prey. However, they have no problem with including farmland as part of their territory, leading to conflict.

Cheetah cubs have a high mortality rate due to genetic factors and predation by carnivores in competition with the cheetah, such as the lion and hyena. Some biologists now believe that they are too inbred to flourish as a species.