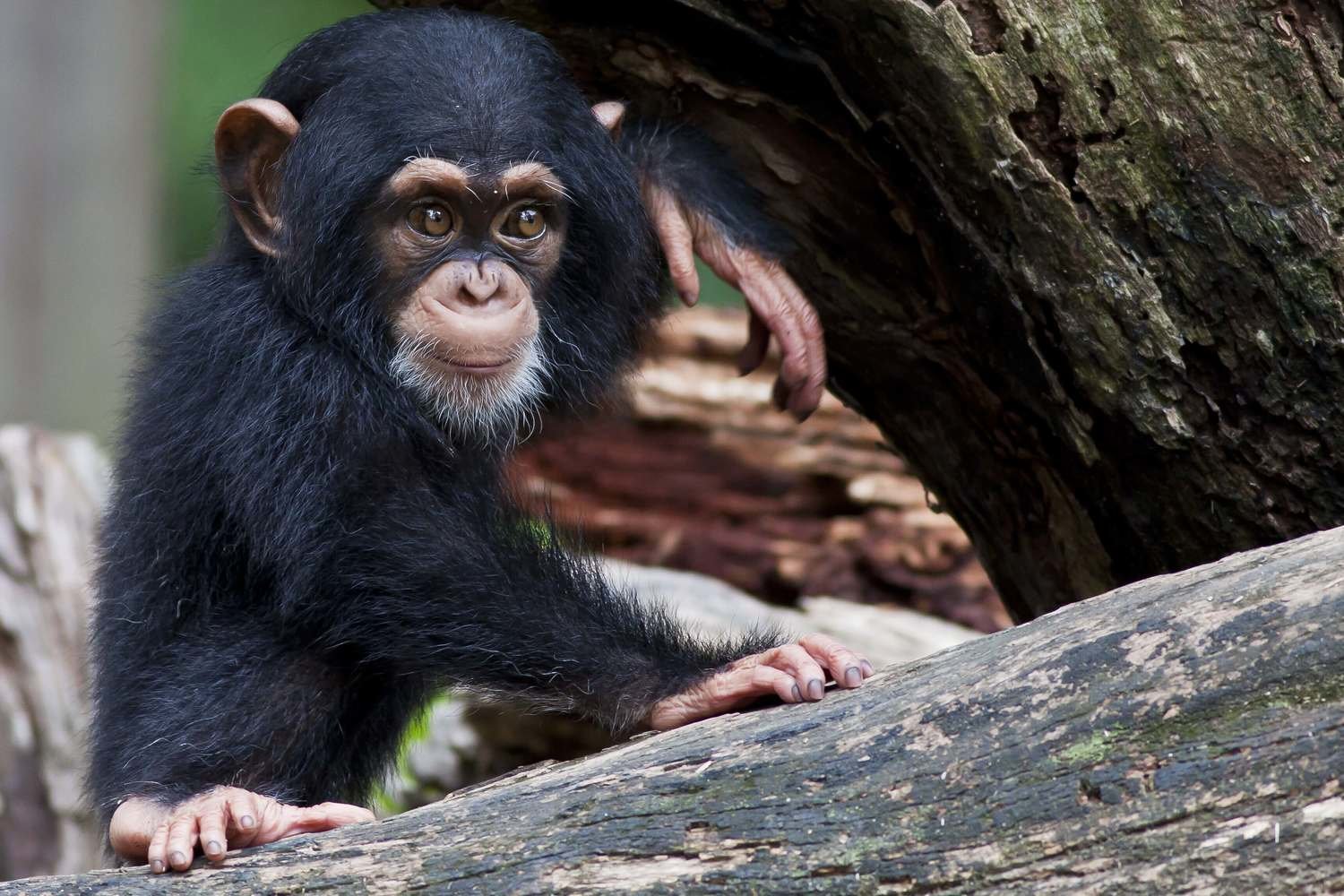 Your Adopt A Chimpanzee Kit comes in a Deluxe Folder and includes:

Adopt A Chimpanzee Kits make great gifts and can be sent directly to the recipient. Simply supply the recipient's name and mailing address as shipping information. We'll even include a letter stating the Adopt An Animal Kit is from you.

Chimpanzee faces are pinkish to black, and the apes' bodies are covered with long black hair. Chimps lack a tail. Their opposable thumbs and toes help them grasp objects easily. Chimpanzees are quadrupedal, which means that they walk on all four limbs, although they can also walk upright (bipedal) for short distances. Standing approximately 4 feet high, males weigh between 90 and 120 pounds, while females weigh between 60 and 110 pounds. An estimated 100,000 to 200,000 chimpanzees remain in the wild.

Chimpanzees rarely live past the age of 50 in the wild, but have been known to reach the age of 60 in captivity. They can be found in 21 African countries. Chimps prefer dense tropical rainforests but can also be found in secondary-growth forests, woodlands, bamboo forests, swamps, and even open savannah. They are omnivores, meaning they eat a wide variety of foods that includes fruits, nuts, seeds, and insects. Chimps occasionally hunt and eat meat.

Chimps live in communities. These communities are composed of family groups of three to six individuals, totaling about 50 animals. Hierarchies are formed by the adult males of the community, which is led by one alpha (the highest) male. Adolescent females may move freely between communities, although territory is strictly patrolled and conflicts can occur between neighbors. Most mothers give birth to one young an average of every five to six years in the wild. Young chimps stay with their mothers for up to 10 years.

Habitat destruction is the greatest threat of the chimpanzee. Large population decreases are also blamed on hunting and commercial exportation. Fewer than 250,000 chimpanzees still exist in western and central Africa. Chimpanzees now occupy only a fraction of their former territory. Chimpanzee habitats, already small and isolated, are being further destroyed by increased commercial and agricultural development. In Africa, both species of chimpanzees - pan paniscus and pan troglodytes - are considered endangered. The U.S. Department of the Interior also lists them as endangered.

There are approximately 2,000 captive chimpanzees in the United States. About 300 are in zoos, and the remaining 1,700 were bred for inhumane medical research. Many are the offspring of chimpanzees captured in the wild before 1973, when the United States agreed to abide by an international treaty prohibiting the capture and importation of wild chimpanzees. Chimpanzee meat is no longer exclusively the food of the forest peoples, but is now commercially available in urban areas too. Bushmeat, including chimpanzee flesh, is also eaten by people in logging camps.

CITES prohibits chimpanzees caught in the wild being used in circuses, but in countries where CITES has not been ratified or where it cannot be enforced, chimpanzees may be taken from the wild as infants, which often means the killing of the adults in their group.

Chimpanzees used in media entertainment are usually eight years old or younger. They are taken from their mothers at birth, as are chimpanzees sold as "pets". They are taught unnatural behaviors and forced to perform tricks. Whey they become too old and dangerous, they are doomed to a life in a roadside zoo, pseudo-sanctuary or circus. There they are often forced to "perform", living in inhumane conditions. Life in captivity is cruel for these wild animals. Some "retired" entertainers are used as breeding chimps, living the rest of their lives in cages.

Chimpanzees have been used in brain and skull research and in social deprivation studies. Chimpanzees have also been popular subjects for AIDS research, although their immune system does not succumb to the virus. Chimpanzees are also used in painful cancer, hepatitis, and psychological tests, as well as for research into artificial insemination and birth control methods, blood diseases, organ transplants, and experimental surgery. Their use in military experiments is suspected, but such information is kept secret and is hard to verify. Because they are in short supply, captive chimps are often subjected to multiple experiments, each of which can last an average of two to four years.

During the late 1980s, the National Institutes of Health (NIH) developed its so-called "National Chimpanzee Management Plan." This plan was, in reality, just a funding mechanism for five breeding colonies to maintain a steady supply of chimpanzees for vivisectors. Under a series of grants, the plan established breeding colonies of chimps at the Yerkes Regional Primate Research Center in Atlanta, the University of Texas in Bastrop, the Primate Foundation of Arizona in Tempe, the University of Southwestern Louisiana in New Iberia, and New Mexico State University (NMSU) in Alamogordo. The Chimpanzee Management Plan (CMP) also established chimpanzee-related research bases at Yerkes and the University of Texas, as well as at Texas A&M in College Station and at the University of Pittsburgh. The International Species Inventory System monitors the status of all the captive chimps. In 2013, under intense pressure from organizations and the public, the National Institutes of Health announced it would retain, but not breed, a colony of up to 50 chimpanzees for potential use. The remainder of the chimps would be designated for retirement into the Federal Sanctuary System.