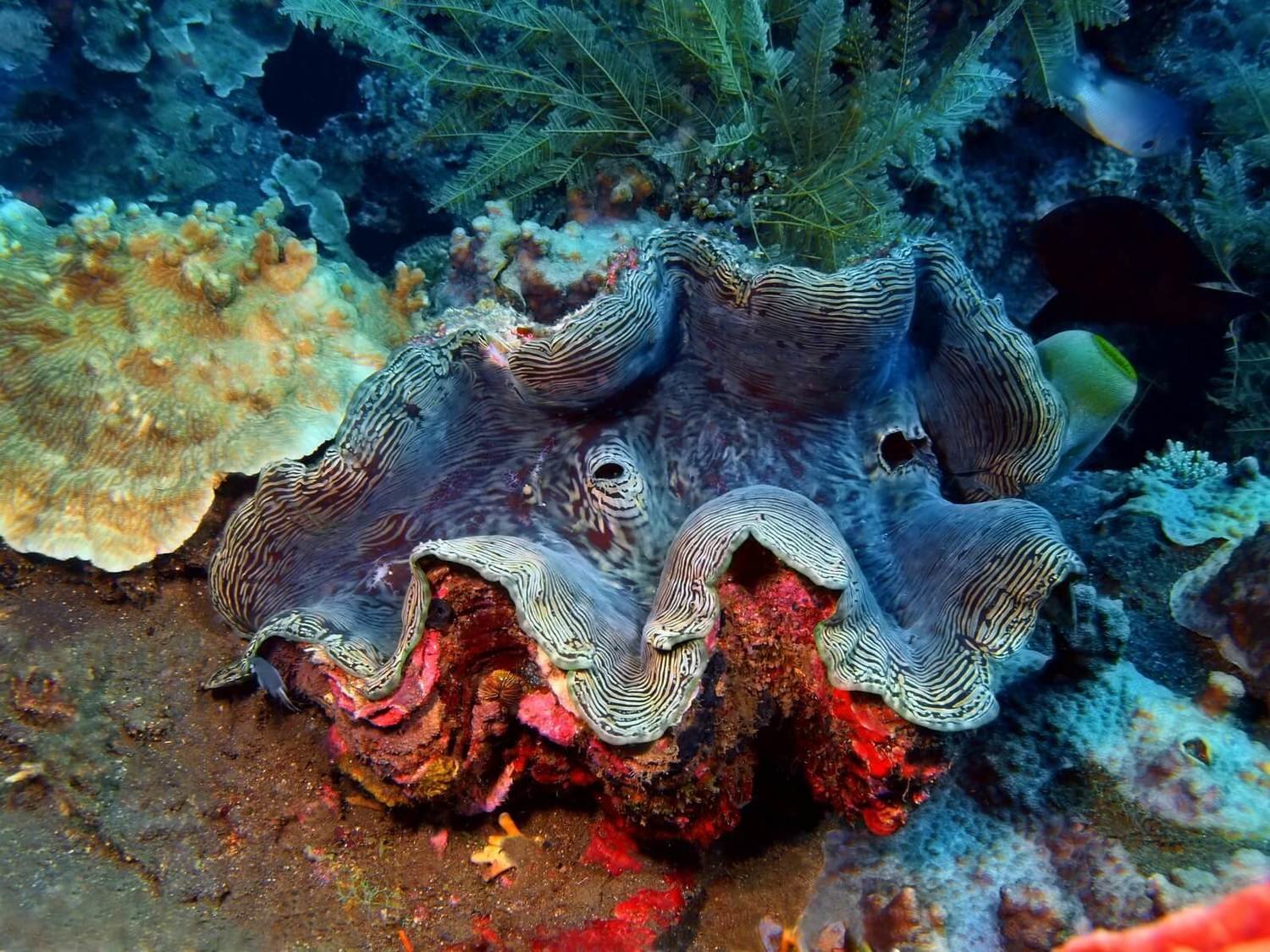 Your Adopt A Clam Kit comes in a Deluxe Folder and includes:

Adopt A Clam Kits make great gifts and can be sent directly to the recipient. Simply supply the recipient's name and mailing address as shipping information. We'll even include a letter stating the Adopt An Animal Kit is from you.

Clams are invertebrates. Invertebrates are animals that do not have a backbone. Clams belong to a group of invertebrates called mollusks. There are over 100,000 kinds of animals or species in the Mollusca phylum or category. Clams are also known as shellfish. The term shellfish includes members of the mollusk phylum and the crustacean subphylum. Crustaceans include lobsters, crabs and shrimp. Crustaceans are really more related to insects than to clams.

Some shellfish or mollusks only have one shell, such as snails. Clams have two shells so they are known as bivalve mollusks. The shells are held together with a hinge. Other bivalves are oysters, cockles, mussels, scallops.

Most bivalves bury themselves in sediment, where they are relatively safe from predation. A sandy sea beach may appear to be devoid of life, but there is often a very large number of bivalves and other invertebrates living beneath the surface of the sand. Others lie on the sea floor or attach themselves to rocks or other hard surfaces. A few bore into wood, clay or stone and live inside these substances. Some bivalves, such as the scallops, can swim.

Clams live in both freshwater and marine habitats, and range in adult size from nearly microscopic to the giant clam, which can weigh 440 lb. Some clams live only one year, while others live to be over 500 years old. Clams lack heads, but most can react to changes in light and some have eyes. All clams have two shells joined near a hinge structure with a flexible ligament, and all are filter feeders. Clams also have kidneys, a heart, a mouth, a stomach, a nervous system and an anus. Many have a siphon.

There are over 12,000 clam species found throughout the world in many different habitats. Most bivalves adopt a sedentary lifestyle, often spending their whole lives in the area in which they first settled as juveniles. The majority of bivalves are infaunal, living under the seabed, buried in sand, silt, mud, gravel or coral fragments. When buried in the sediment, they are protected from the pounding of waves, desiccation and overheating during low tide, and variations in salinity caused by rainwater. They are also out of the reach of many predators. Their general strategy is to extend their siphons to the surface for feeding and respiration during high tide, but to descend to greater depths or keep their shell tightly shut when the tide goes out. They use their muscular foot to dig into the substrate.

Some bivalves, such as mussels, attach themselves to hard surfaces. They are more exposed to attack by predators than the burrowing bivalves. Others, including the true oysters, the jewel boxes, the jingle shells, the thorny oysters and the kitten's paws, cement themselves to stones, rock or larger dead shells.

Bivalves filter large amounts of water to feed and breathe but they are not permanently open. They regularly shut their valves to enter a resting state, even when they are permanently submerged.

The thick shell and rounded shape of bivalves make them awkward for potential predators to tackle. Razor shells can dig themselves into the sand with great speed to escape predation. Scallops and file clams can swim by opening and closing their valves rapidly; water is ejected on either side of the hinge area and they move with the flapping valves in front. Scallops have simple eyes around the margin of the mantle and can clap their valves shut to move sharply, hinge first, to escape from danger. Cockles can use their foot to move across the seabed or leap away from threats. The foot is first extended before being contracted suddenly when it acts like a spring, projecting the animal forwards. In many bivalves that have siphons, they can be retracted back into the safety of the shell. If the siphons inadvertently get attacked by a predator, they snap off. The animal can regenerate them later. File shells can produce a noxious secretion when stressed.

The giant clam is the largest immobile mollusc in the world, reaching up to 6 feet in length. It is not uncommon for these giant molluscs to live for more than 100 years.

Mother-of-pearl, or nacre, is a blend of minerals that are secreted by oysters and other mollusks and deposited inside their shells, coating and protecting them from parasites and foreign objects. Nacre is the same substance that is deposited around an object that becomes lodged in the mollusk to become a pearl. Most bivalves can create pearls. Pearls are formed inside the shell of certain mollusks as a defense mechanism against a potentially threatening irritant such as a parasite inside the shell, or an attack from outside that injures the mantle tissue. The mollusk creates a pearl sac to seal off the irritation. Pearls are commonly viewed by scientists as a by-product of an adaptive immune system-like function.

Clams are important biologically; they work as marine filters as they take in harmful waste nutrients like ammonia and nitrate and expel clean water to the environment. The symbiotic zoothanthellae found within its mantel tissue produces oxygen during photosynthesis.

Clams are threatened by unsustainable collection for seafood restaurants and the ornamental fish trade. Shells are sold as decorative souvenirs. Ocean acidification may also be threatening clams.

Despite all eight species of giant clams in the world being listed under Appendix II of the Convention on International Trade in Endangered Species of Wild Fauna and Flora (CITES) which prohibits unrestricted trade between countries, giant clams are constantly found in seafood stores and prized in the ornamental fish trade. Giant clams are also listed as ‘Vulnerable’ in the IUCN Red List of Endangered Animals. These listings reflect the global concern regarding the possible extinction of giant clams as a whole.