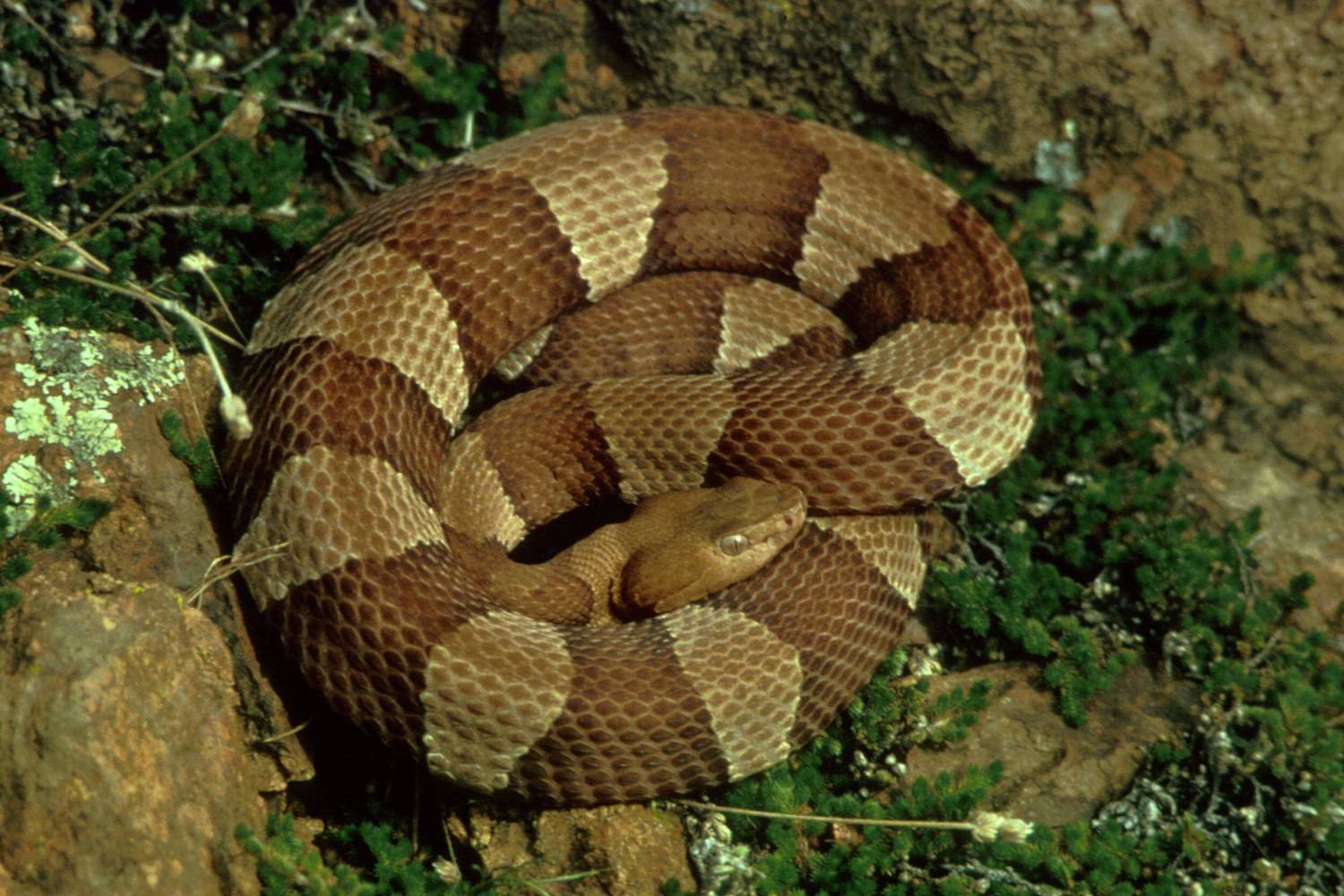 Your Adopt A Copperhead Kit comes in a Deluxe Folder and includes:

Adopt A Copperhead Kits make great gifts and can be sent directly to the recipient. Simply supply the recipient's name and mailing address as shipping information. We'll even include a letter stating the Adopt An Animal Kit is from you.

Copperheads are a species of venomous snake in North America, a member of the Crotalinae (pit viper) subfamily. Five subspecies are currently recognized. They get their name from the unique copper hue present on the scales of their heads.

Copperheads grow to an average length of 20–37 inches (including tail). They have unmarked copper-colored heads, reddish-brown coppery bodies and chestnut brown crossbands that constrict towards their midline. Their thick bodies feature keeled scales. Males are usually larger than females, though females grow to greater lengths. Their bodies are relatively stout and their heads are broad and distinct from their necks. Their snouts slope down and back, with the top of their heads extending further forward than the mouth.

Copperheads occupy a variety of different habitats. In most of North America they favor deciduous forest and mixed woodlands. They are often found in rock outcroppings and ledges, and also in low-lying swampy regions.

Copperheads inject animals with venom to subdue the prey, to make it easier to swallow it. Using heat-sensitive pits, they detect animals that are warmer than their environment. Using this ability, they are also able to find nocturnal animals. Smaller prey are usually held in their mouths until they die. Larger animals are released and then tracked after the venom takes affect.

Copperheads in the southern United States are nocturnal during hot summer months, while active during the day during the spring and fall.

Copperheads are social animals. They hibernate in communal dens with other copperheads and other species of snakes. They usually return to the same den each year. They sun, eat and drink together. They also migrate together in the late spring to summer feeding territories, then return together in early fall.

During the spring and fall mating seasons, males seek females using their tongues to detect pheromones in the air. They then move their heads or rub their chins on the ground. Males may engage in combat by elevating their bodies, swaying side to side, hooking necks, and intertwining their entire bodies. Courtship may last over an hour, with the male and female bodies aligned. Mating can last over 8 hours. Other males then pay little attention to a female who has mated, as their partner emits a pheromone that makes the female unattractive to others. Females may store the sperm until they are ready to begin the gestation period which lasts three to nine months.

During the winter copperheads hibernate in dens, in limestone crevices, often together with Timber Rattlesnakes and Black Rat Snakes.

Copperheads attempt to avoid humans, but unlike other viperids they will often "freeze" instead of slithering away. As a result, many bites occur from people unknowingly stepping on or near them. They usually will give a warning bite and inject only a small amount of venom, or none at all.

Copperheads live up to 18 years.

Humans are the main predators of copperheads, clearing land for their own use while destroying the natural habitats of copperheads. Humans also hunt and kill copperheads out of fear, or for amusement. Copperheads are also victims of the unethical “pet” trade, sold as “exotic animals”. They are inhumanely kept in captivity for the amusement of humans. These wild animals are deprived of their natural lifestyle, confined to small enclosures, and endure stress and health ailments from their unnatural living conditions.