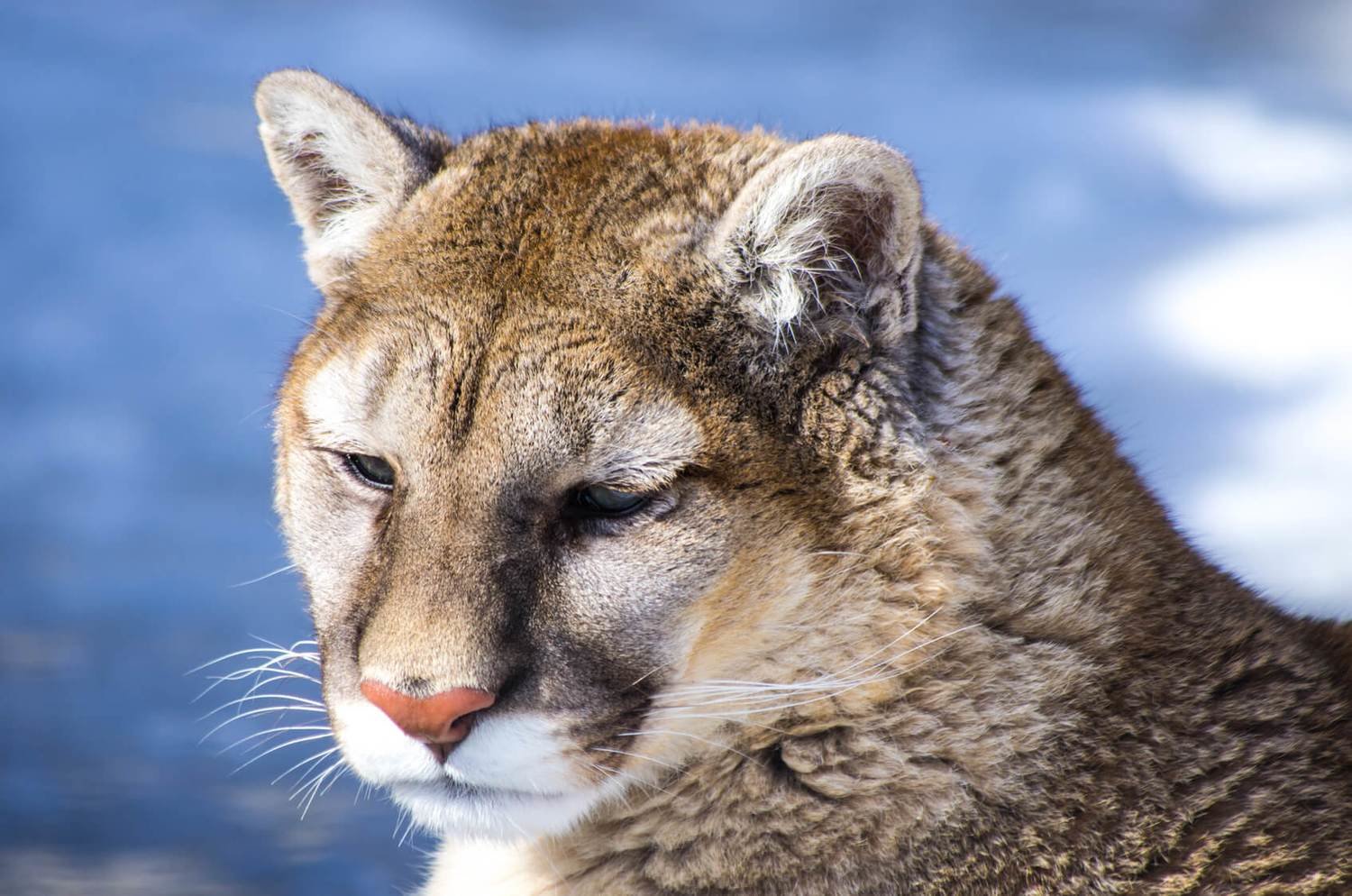 Your Adopt A Cougar Kit comes in a Deluxe Folder and includes:

Adopt A Cougar Kits make great gifts and can be sent directly to the recipient. Simply supply the recipient's name and mailing address as shipping information. We'll even include a letter stating the Adopt An Animal Kit is from you.

The cougar (Puma concolor), also commonly known as the mountain lion, puma, or catamount, is a large felid of the subfamily Felinae native to the Americas. Its range, from the Canadian Yukon to the southern Andes of South America, is the greatest of any large wild terrestrial mammal in the Western Hemisphere. An adaptable, generalist species, the cougar is found in most American habitat types. It is the second heaviest cat in the New World, after the jaguar. The cougar is more closely related to smaller felines, including the domestic cat, than to any subspecies of lion, of which only the jaguar is native to the Western Hemisphere.

The cougar is an ambush predator and pursues a wide variety of prey. Primary food sources are ungulates, which include deer, such as mule deer, white-tailed deer, elk, and moose. Other ungulates it preys on are bighorn sheep, as well as domestic cattle, horses and sheep, particularly in the northern part of its range. Cougars will also hunt species as small as insects and rodents.

This cat prefers habitats with dense underbrush and rocky areas for stalking, but can also live in open areas. The cougar is territorial and survives at low population densities. Individual territory sizes depend on terrain, vegetation, and abundance of prey. While large, it is not always the apex predator in its range, yielding to the jaguar, gray wolf, American black bear, and grizzly bear. It is reclusive and mostly avoids people.

Female cougars reach sexual maturity between one-and-a-half to three years of age. They typically average one litter every two to three years throughout their reproductive lives, though the period can be as short as one year. Females are in estrus for about 8 days of a 23-day cycle; the gestation period is approximately 91 days. Females are sometimes reported as monogamous. Copulation is brief but frequent.

Only females are involved in parenting. Female cougars are fiercely protective of their cubs, and have been seen to successfully fight off animals as large as American black bears in their defense. Litter size is between one and six cubs; typically two. Caves and other alcoves that offer protection are used as litter dens. Born blind, cubs are completely dependent on their mother at first, and begin to be weaned at around three months of age. As they grow, they begin to go out on forays with their mother, first visiting kill sites, and after six months beginning to hunt small prey on their own. When cougars are born they have spots, but they lose them by the age of 2 1/2 years.

Young adults leave their mother to attempt to establish their own territory at around two years of age and sometimes earlier; males tend to leave sooner. Life expectancy is reported at eight to 13 years, though they have been known to live as long as 30 years. Causes of death in the wild include disability and disease, competition with other cougars, starvation, accidents, and, where allowed, human hunting. Feline immunodeficiency virus, an endemic HIV-like virus in cats, is well-adapted to the cougar.

Like almost all cats, the cougar is a solitary animal. Only mothers and kittens live in groups, with adults meeting only to mate. They are secretive and crepuscular, being most active around dawn and dusk. Estimates of territory sizes vary greatly, from 10 to 386 square miles, with female ranges half the size of males. Male ranges may include or overlap with those of females but, at least where studied, not with those of other males, which serves to reduce conflict between cougars. Ranges of females may overlap slightly with each other. Scrape marks, urine, and feces are used to mark territory and attract mates. Males may scrape together a small pile of leaves and grasses and then urinate on it as a way of marking territory. Home range sizes and overall cougar abundance depend on terrain, vegetation, and prey abundance.

Because males disperse farther than females and compete more directly for mates and territory, they are most likely to be involved in conflict. Where a subadult fails to leave his maternal range, for example, he may be killed by his father. When males encounter each other, they hiss, spit, and may engage in violent conflict if neither backs down.

Conservation threats to the species include persecution as a pest animal, environmental degradation and habitat fragmentation, and depletion of their prey base. Wildlife corridors and sufficient range areas are critical to the sustainability of cougar populations.

The cougar's total breeding population is estimated at less than 50,000 by the IUCN, with a declining trend. Prolific hunting following European colonization of the Americas and the ongoing human development of cougar habitat has caused populations to drop in most parts of its historical range. In particular, the cougar was extirpated in eastern North America in the beginning of the 20th century, except for an isolated Florida panther subpopulation. However, in recent decades, breeding populations have moved east into the far western parts of the Dakotas, Nebraska, and Oklahoma. Transient males have been verified in Minnesota, Missouri, Wisconsin, Iowa, the Upper Peninsula of Michigan, and Illinois. They have been observed as far east as coastal Connecticut. Eastern cougars (Puma concolor cougar) are commonly sighted, despite being declared extirpated in 2011.

Cougar hunting is prohibited in Argentina, Brazil, Bolivia, Chile, Colombia, Costa Rica, French Guiana, Guatemala, Honduras, Nicaragua, Panama, Paraguay, Suriname, Venezuela, and Uruguay. The cat has no reported legal protection in Ecuador, El Salvador, and Guyana. Regulated cougar hunting is still common in the United States and Canada, although they are protected from all hunting in the Yukon; it is permitted in every U.S. state from the Rocky Mountains to the Pacific Ocean. Mountain lions may be killed in California if “a depredation permit is issued to take a specific lion killing livestock or pets; to preserve public safety; or to protect listed bighorn sheep.” Texas is the only state in the United States with a viable population of cougars that does not protect that population in some way. In Texas, cougars are listed as “nuisance wildlife” and any person holding a hunting or a trapping permit can kill a cougar regardless of the season, number killed, sex or age of the animal.