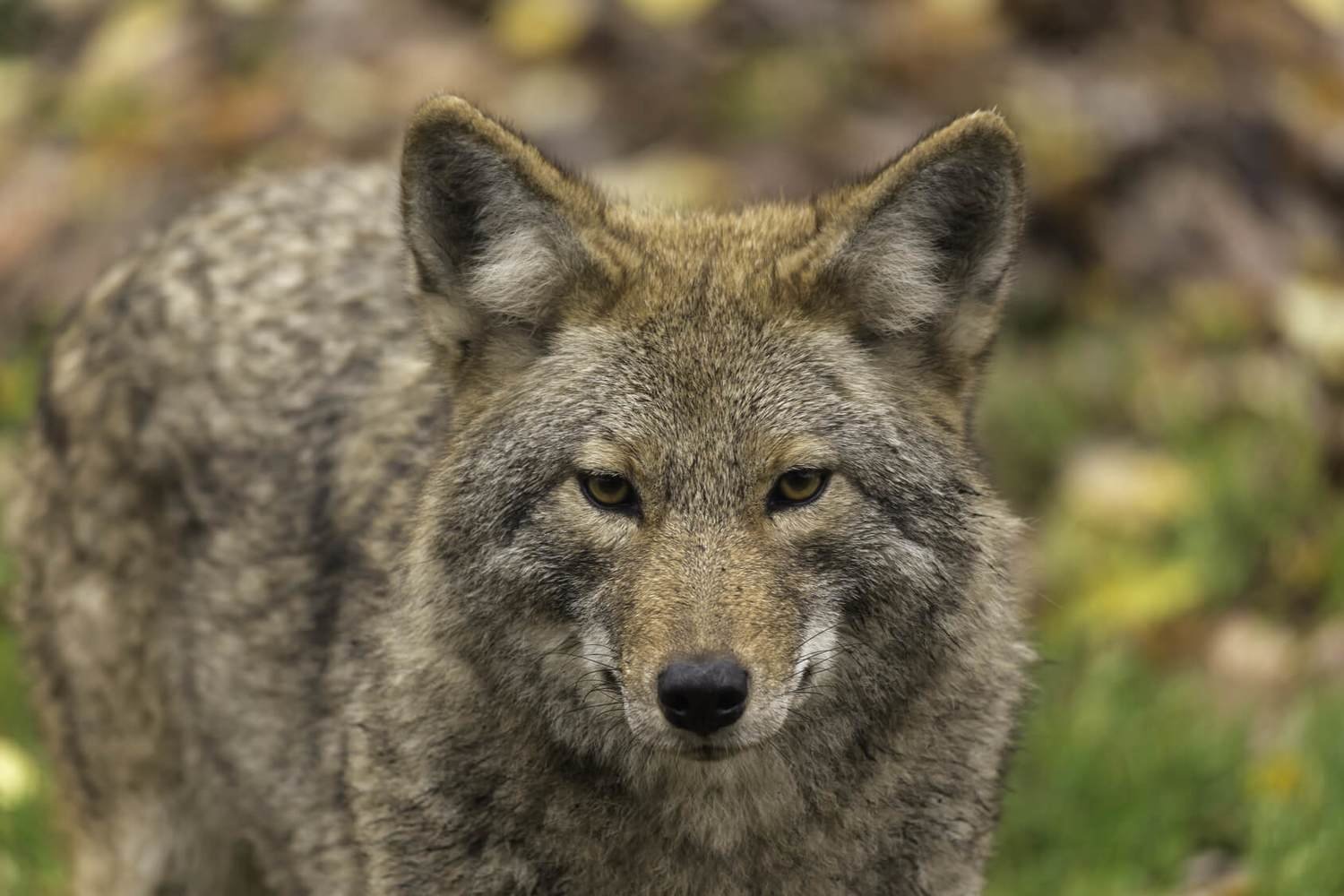 Your Adopt A Coyote Kit comes in a Deluxe Folder and includes:

Adopt A Coyote Kits make great gifts and can be sent directly to the recipient. Simply supply the recipient's name and mailing address as shipping information. We'll even include a letter stating the Adopt An Animal Kit is from you.

The coyote, also known as the American jackal or the prairie wolf, is a species of canine found throughout North and Central America, ranging from Panama in the south, north through Mexico, the United States and Canada. It occurs as far north as Alaska and all but the northernmost portions of Canada. There are currently 19 recognized subspecies, with 16 in Canada, Mexico and the United States, and 3 in Central America. Unlike its cousin the gray wolf, which is Eurasian in origin, evolutionary theory suggests the coyote evolved in North America during the Pleistocene epoch 1.81 million years ago alongside the Dire Wolf. Unlike the wolf, the coyote's range has expanded in the wake of human civilization, and coyotes readily reproduce in metropolitan areas.

The color of the coyote's pelt varies from grayish brown to yellowish gray on the upper parts, while the throat and belly tend to have a buff or white color. The forelegs, sides of the head, muzzle and paws are reddish brown. The back has tawny-colored underfur and long, black-tipped guard hairs that form a black dorsal stripe and a dark cross on the shoulder area. The black-tipped tail has a scent gland located on its base.

The ears are proportionately large in relation to the head, while the feet are relatively small in relation to the rest of the body. Coyotes typically grow to up to 30–34 inches in length, not counting a tail of 12–16 inches, stand about 23–26 inches at the shoulder and, on average, weigh from 15–46 lb. Northern coyotes are typically larger than southern subspecies, with the largest coyotes on record weighing 74¾ pounds and measuring over five feet in total length. Coyotes shed once a year, beginning in May with light hair loss, ending in July after heavy shedding.

Female coyotes go into heat once a year, and remain in heat for 2–5 days between late January and late March, during which mating occurs. Once the female chooses a partner, the mated pair may remain temporarily monogamous for a number of years. The gestation period lasts from 60 to 63 days. Litter size ranges from 1 to 19 pups; the average is 6. These large litters act against the high juvenile mortality rate, with approximately 50–70% of pups not surviving to adulthood. The pups are initially blind and limp-eared. Coyote growth rate is faster than that of wolves. The eyes open and ears become erect after 10 days. Around 21–28 days after birth, the young begin to emerge from the den, and by 35 days they are fully weaned. Both parents feed the weaned pups with regurgitated food. Male pups will disperse from their dens between months 6 and 9, while females usually remain with the parents and form the basis of the pack. The pups attain full growth between 9 and 12 months. Sexual maturity is reached by 12 months.

The calls a coyote makes are high-pitched and variously described as howls, yips, yelps, and barks. These calls may be a long rising and falling note (a howl) or a series of short notes (yips). The calls are most often heard at dusk or night, but may sometimes be heard in the day or in the middle of the day. Although the calls are made throughout the year, they are most common during the spring mating season and in the fall when the pups leave their families to establish new territories. When a coyote calls his pack together, he howls at one high note. When the pack is together, he howls higher and higher, and then they yip and yelp and also do a yi-yi sound, very shrill, with the howl.

Coyotes are opportunistic, versatile carnivores with a 90% mammalian diet, depending on the season. They primarily eat small mammals, such as voles, prairie dogs, eastern cottontails, ground squirrels, and mice - though they will eat birds, snakes, lizards, deer, javelina, and livestock, as well as large insects and other large invertebrates. The coyote will also target any species of bird that nests on the ground. Though they will consume large amounts of carrion, they tend to prefer fresh meat. Fruits and vegetables are a significant part of the coyote's diet in the autumn and winter months.

Part of the coyote's success as a species is its dietary adaptability. As such, coyotes have been known to eat human rubbish and domestic pets. Urban populations of coyotes have been known to actively hunt cats, and to leap shorter fences to take small dogs. However, this behavior is often reported when normal urban prey, such as brown rats, black rats and rabbits, have become scarce.

Coyotes shift their hunting techniques in accordance with their prey. When hunting small animals such as mice, they slowly stalk through the grass, and use their acute sense of smell to track down the prey. When the prey is located, the coyotes stiffen and pounce on the prey in a cat-like manner. Coyotes will commonly work in teams when hunting large ungulates such as deer, which is more common in winter (when large prey is likely weakened) and in larger-bodied Northern coyotes. Coyotes may take turns in baiting and pursuing the deer to exhaustion, or they may drive it towards a hidden member of the pack. Coyotes are persistent hunters, with successful attacks sometimes lasting as long as 21 hours; even unsuccessful ones can continue more than 8 hours before the coyotes give up. Packs of coyotes can bring down prey as large as adult elk.

Despite being extensively hunted, the coyote is one of the few medium-to-large-sized animals that has enlarged its range since human encroachment began. It originally ranged primarily in the western half of North America, but it has adapted readily to the changes caused by human presence and, since the early 19th century, has been steadily and dramatically extending its range. Sightings now commonly occur in a majority of the United States and Canada. Coyotes inhabit nearly every contiguous U.S. state and Alaska. Coyotes have moved into most of the areas of North America formerly occupied by wolves, and are often observed foraging in suburban garbage bins. Coyotes thrive in suburban settings and even some urban ones. Urban coyotes tend to live longer than their rural counterparts, and live anywhere from parks to industrial areas.

Destruction and fragmentation of habitat has resulted in dramatic conflicts with carnivores such as coyotes.

The killing of wild carnivores has long been common practice in North America, as they are often viewed as a threat to humans and domestic animals...rather than an important part of the ecosystem. They are also killed to protect corporate-owned lands, and to boost “game” stocks for hunters. Trophy hunting and trapping take a massive toll on carnivores across the continent.

“Damage control programs” result in the killing of million of animals by the U.S government each year. Government agencies and private interests employ a disturbing array of lethal methods to kill an alarming number of carnivores including: leghold traps, neck snares, poisoning, clubbing, trapping, gunning from helicopters, hounding, baiting, shooting, and killing pups in their dens.

These techniques are inhumane and do not address the root causes of conflicts; nor do they provide long-lasting solutions.