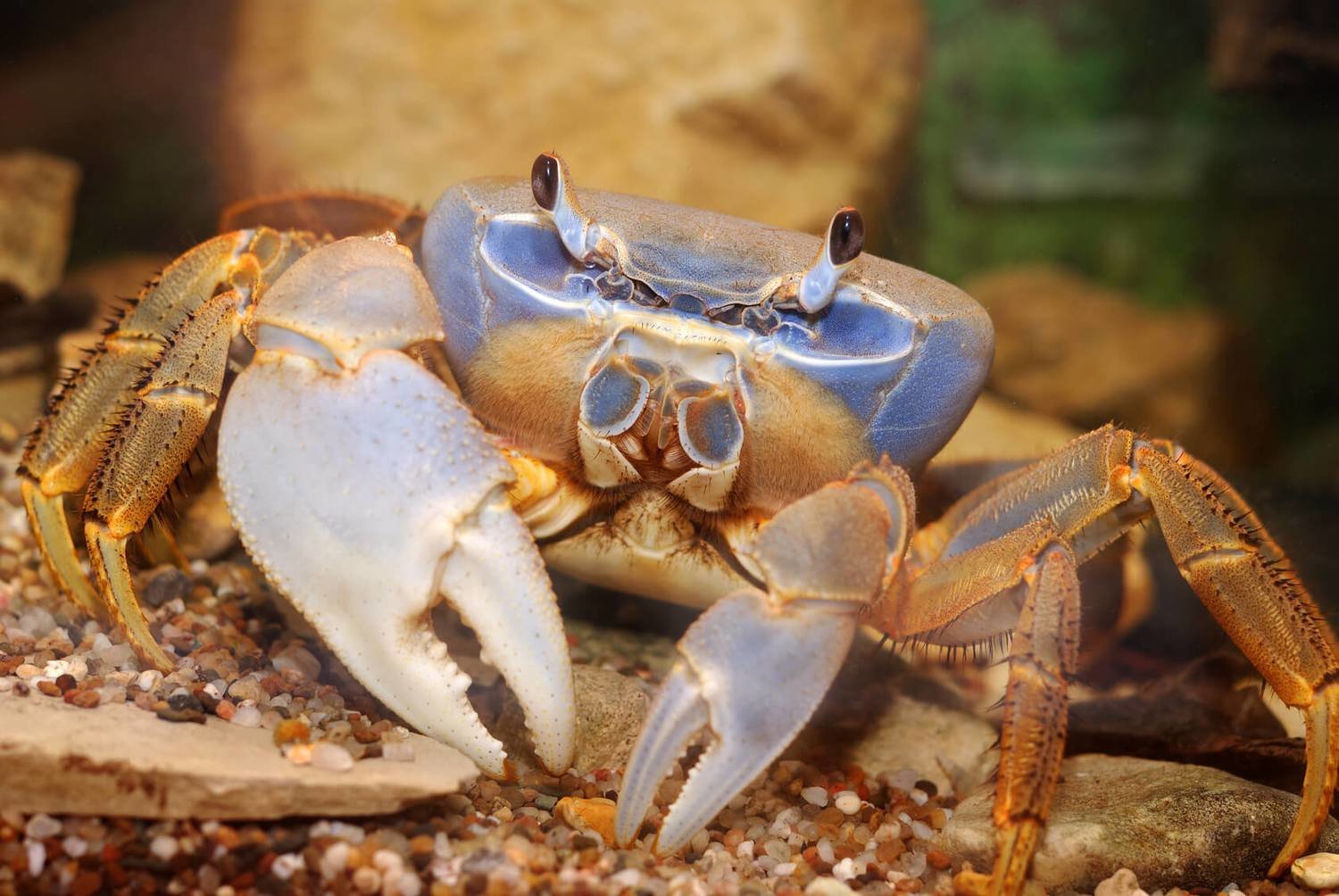 Your World Animal Foundation Adopt A Crab Kit comes in a Deluxe WAF Folder and includes:

Adopt A Crab Kits make great gifts and can be sent directly to the recipient. Simply supply the recipient's name and mailing address as shipping information. We'll even include a letter stating the Adopt An Animal Kit is from you.

Crabs are decapod crustaceans of the infraorder Brachyura, which typically have a very short projecting "tail" (abdomen), usually entirely hidden under the thorax. They live in all the world's oceans, in fresh water, and on land. They are generally covered with a thick exoskeleton and have a single pair of claws. Many other animals with similar names – such as hermit crabs, king crabs, porcelain crabs, horseshoe crabs and crab lice – are not true crabs.

Crabs vary in size from the pea crab, a few millimeters wide, to the Japanese spider crab, with a leg span of up to 13 feet. Males often have larger claws. In most male crabs, the abdomen is narrow and triangular in form, while females have a broader, rounded abdomen. This is due to the fact that female crabs brood fertilized eggs on their legs.

Crabs attract a mate through chemical (pheromones), visual, acoustic or vibratory means. Pheromones are used by most fully aquatic crabs, while terrestrial and semi-terrestrial crabs often use visual signals, such as fiddler crab males waving their large claw to attract females. Many crabs have internal fertilization and mate belly-to-belly. For aquatic species, mating usually takes place just after the female has moulted and is still soft. Females can store the sperm for a long time before using it to fertilize their eggs. When fertilization has taken place, the eggs are released onto the female's abdomen, below the tail flap, secured with a sticky material. In this location they are protected during embryonic development. Females carrying eggs are called "berried" since the eggs resemble round berries.

When development is complete, the female releases the newly hatched larvae into the water, where they are part of the plankton. The release is often timed with the tides. The free-swimming tiny zoea larvae can float and take advantage of water currents.

Each species has a particular number of stages, separated by moults, before they change into a megalopa stage, which resembles an adult crab, except for having the abdomen (tail) sticking out behind. After one more moult, the crab is a juvenile, living on the bottom rather than floating in the water. This last moult must take place in a habitat that is suitable for the juvenile to survive.

Most species of terrestrial crabs must migrate down to the ocean to release their larvae; in some cases this entails very extensive migrations. After living for a short time as larvae in the ocean, the juveniles must do this migration in reverse.

Once crabs have become juveniles they still have to keep moulting many more times to become adults. They are covered with a hard shell, which would otherwise prevent growth. The moult cycle is coordinated by hormones. When preparing for moult, the old shell is softened and partly eroded away, while the beginnings of a new shell form under it. At the time of moulting, the crab takes in a lot of water to expand and crack open the old shell. The crab must then extract itself from the old shell. This is a difficult process that takes many hours, and if a crab gets stuck it will die. After freeing itself from the old shell the crab is extremely soft and hides until its new shell has hardened. While the new shell is still soft, the crab can expand it to make room for future growth.

Crabs typically walk sideways. However, some crabs walk forwards or backwards. Some crabs are also capable of swimming.

Crabs are active, complex animals. They can communicate by drumming or waving their pincers. Crabs tend to be aggressive towards one another and males often fight to gain access to females. On rocky seashores, where nearly all caves and crevices are occupied, crabs may also fight over hiding holes. Fiddler crabs dig burrows in sand or mud, which they use for resting, hiding, mating and to defend against intruders.

Crabs are omnivores, feeding primarily on algae, and taking any other food, including molluscs, worms, other crustaceans, fungi, bacteria and detritus, depending on their availability and the crab species. For many crabs, a mixed diet of plant and animal matter results in the fastest growth and greatest fitness. However, some species are more specialized in their diets. Some eat plankton, some eat primarily shellfish like clams, and some even catch fish.

Crabs are known to work together to provide food and protection for their family, and during mating season to find a comfortable spot for the female to release her eggs. They will help other crabs fight off intruders. Neighboring crabs never fight with each other.

Many mother crabs provide loving care for their babies. Mothers continue to feed and tend to their babies for several months after they are born. They work hard to keep their homes clean and comfortable for their young.

Crabs are intelligent animals, capable of learning from their mistakes and retaining that information so they don’t make the same mistakes again. They adapt to changing cues in their environment.

Crabs are threatened with declining habitats, pollution, overfishing and the declining abundance of coral reefs. Crabs make up 20% of all marine crustaceans caught, farmed, and consumed worldwide, amounting to 1½ million tons annually. In some species, crab meat is harvested by manually twisting and pulling off one or both claws and returning the live crab to the water in the belief the crab will survive and regenerate the claws thereby making it a sustainable industry. Crabs are often inhumanely boiled alive. Crustaceans are able to feel and remember pain. They fight so hard against a clearly painful death that their claws often break off in their struggle to escape. Some crabs used for food are electrocuted, some are chopped up, and others are microwaved—all while they are still conscious.