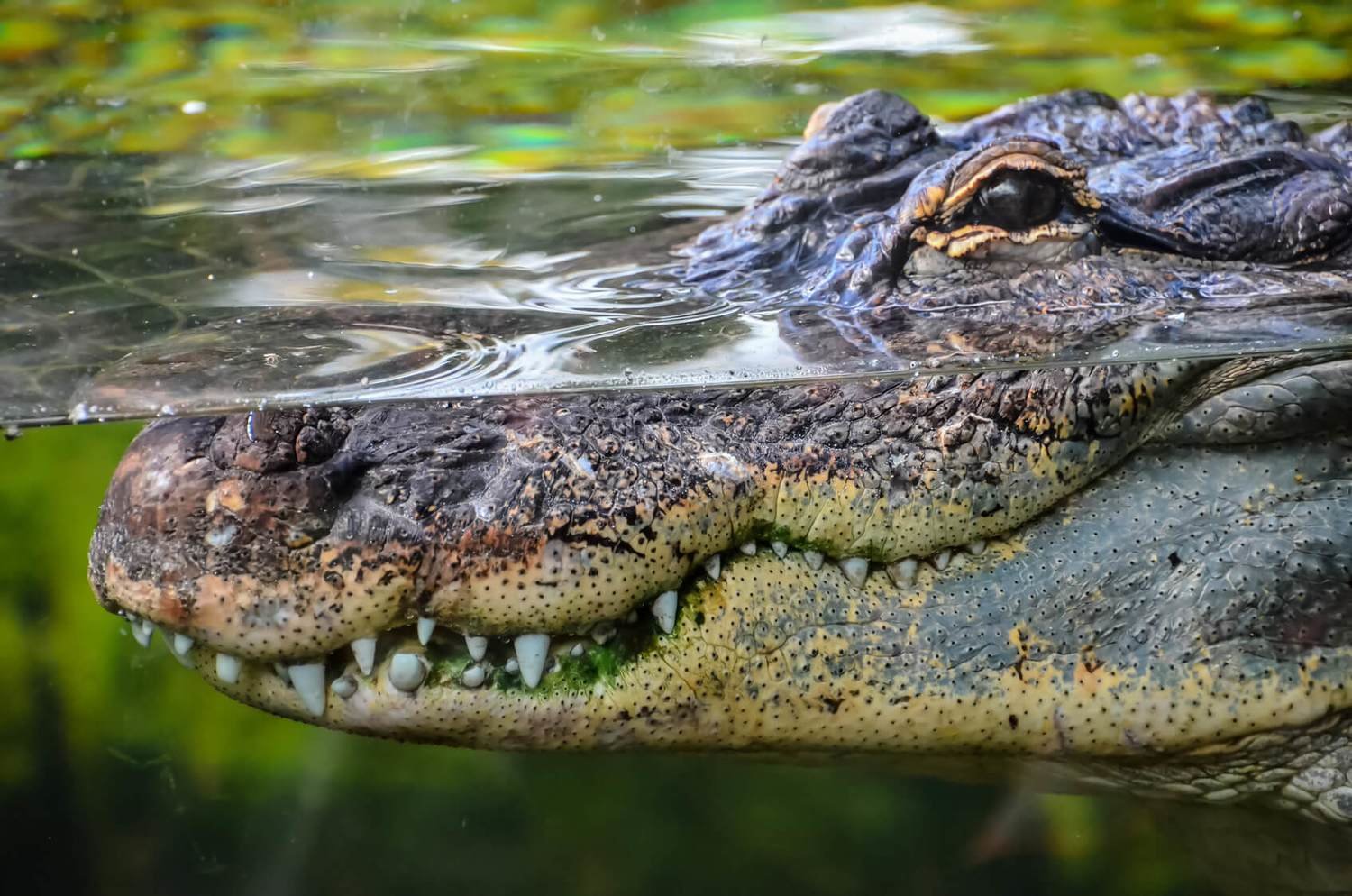 Your Adopt A Crocodile Kit comes in a Deluxe Folder and includes:

Adopt A Crocodile Kits make great gifts and can be sent directly to the recipient. Simply supply the recipient's name and mailing address as shipping information. We'll even include a letter stating the Adopt An Animal Kit is from you.

Crocodiles are large, carnivorous reptiles of the order Crocodilia, found in tropical and subtropical regions. Crocodiles live in swamps or on river banks and catch their prey in the water. They have flattened bodies and tails, short legs, and powerful jaws. The eyes, ears, and nostrils are located near the top of the head and are exposed when the crocodile floats on the surface of the water. The ears and nostrils have valves that close when the animal is submerged.

Most crocodiles are more aggressive than the related alligators. The two forms are distinguished by the long lower fourth tooth: in crocodiles, but not in alligators, this tooth protrudes on the side of the head when the mouth is closed. Also, the snouts of most crocodiles are narrower than those of alligators.

Crocodiles tend to congregate in slow moving rivers and lakes, and feed on a wide variety of living and dead mammals and fish. Some species, notably the saltwater crocodile of Australia and the Pacific islands, have been known to venture far out to sea. They are an ancient lineage, and are believed to have changed little since the time of the dinosaurs.

Crocodiles are very fast over short distances, even out of water. They have extremely powerful jaws and sharp teeth for tearing flesh. All large crocodiles also have sharp welters and powerful claws. They have limited lateral movement in their neck, so on land one can find protection by getting even a small tree between the crocodile's jaws and oneself.

Crocodiles are ambush hunters, waiting for fish or land animals to come close, then rushing out to attack. As cold blooded predators, they can survive long periods without food, and rarely need to actively go hunting.

The crocodile's bite strength is up to 3000 pounds per square inch, comparing to just 100 psi for a large dog. Despite their slow appearance, crocodiles are the top predators in their environment, and various species have been observed attacking and killing lions, large ungulates and even sharks. A famous exception is the Egyptian plover which is said to enjoy a symbiotic relationship with the crocodile. The plover feeds on parasites that infest the crocodile's mouth and the reptile will open its jaws and allow the bird to enter to clean out the mouth.

The female crocodile deposits her eggs, usually about 20 in number, in a nest of rotting vegetation or in a shallow pit on the river bank, and digs them up when she hears them hatching.

In most species the average adult length is between 6 and 10 feet. The largest crocodile (the saltwater crocodile) is often 14 feet long and may exceed 20 feet in length. The Nile, American, and Orinoco crocodiles are commonly 12 feet long, and specimens up to 23 feet long have been reported for the last two species. The extinct Sarcosuchus imperator, which lived during the Cretaceous period, may have approached 40 feet in length. The smallest crocodile (the Congo dwarf crocodile) averages 31/2 feet long.

With the exception of the two African dwarf crocodiles (Osteolaemus) and the so-called false gavial (Tomistoma) of Asia, crocodiles are classified in the genus Crocodylus, with about a dozen species. The Nile crocodile (C. niloticus) is found in fresh and saltwater throughout South and Central Africa. In early historic times it ranged north to the Nile delta and the Mediterranean coast. It sometimes attacks humans, as does the saltwater crocodile (C. porosus), found on islands and in straits from South East Asia to Australia and Melanesia.

The marsh crocodile, or mugger (C. palustris), is a freshwater species of India and Sir Lanka, regarded as sacred in some regions. The American crocodile (C. acutus) is found in fresh and saltwater in South Florida, the West Indies, Central America, and North West South America. It does not attack humans without provocation.

The Orinoco crocodile (C. intermedius) is a freshwater species of the Orinoco basin of Colombia and Venezuela. Two smaller species are found in limited areas of Central America and Cuba.

Many species of crocodiles are at the risk of extinction, some being classified as critically endangered. The most critical threat facing crocodiles is the loss and fragmentation of natural habitats. Humans have exploited crocodiles to the point of population crashes. Hunting remains a serious threat to crocodiles, as well as pollution.

Collection for the exotic pet trade has also reduced population densities of crocodiles. Every year, a variety of sources provides millions of animals to the exotic pet trade. Animals are captured from their native habitat and transported to various countries to be sold as “pets”. Others are surplus animals from zoos or their offspring. Backyard breeders also supply exotic animals. The sellers of these animals often disregard state or local laws regulating private possession of exotics, and the dangers, difficulties, physical and physiological needs of the animals they peddle. The suffering of the animals in the hands of unqualified and hapless buyers appears to be of no concern in the lucrative exotic pet trade. Reptiles pose safety risks to humans. Many incidents have been reported of escapes, strangulations, and bites from pet reptiles across the country.

Crocodiles are also victims of the animal entertainment industry. The use of wild animals as “entertainers” removes animals from their natural habitat; depriving them of the ability to freely engage in instinctual behaviors. Both children and adults are desensitized to animal mistreatment by the animal entertainment industry. Even under the best of circumstances, captivity is cruel for wild animals. Confined to tiny areas and gawked at by crowds, animals in exhibits and acts endure constant stress. They may suffer from temperature extremes and irregular feeding and watering. Without exercise, they become listless, their immune systems are weakened, and they become prone to sickness; many resort to self-mutilation in reaction to stress or boredom. Mental illness is rampant among confined animals. Torn from their families and deprived of all dignity, every part of their lives is controlled by their captors. While zoos may appear to be educational and conservation-oriented, most are designed with the needs and desires of the visitors in mind, not the needs of the animals.

Wild crocodiles are protected in many parts of the world, but they also are inhumanely farmed commercially. Their hide is tanned and used to make leather goods such as shoes and handbags, while crocodile meat is also considered a delicacy in many parts of the world. The most commonly farmed species are the saltwater and Nile crocodiles, while a hybrid of the saltwater and the rare Siamese crocodile is also bred in Asian farms.