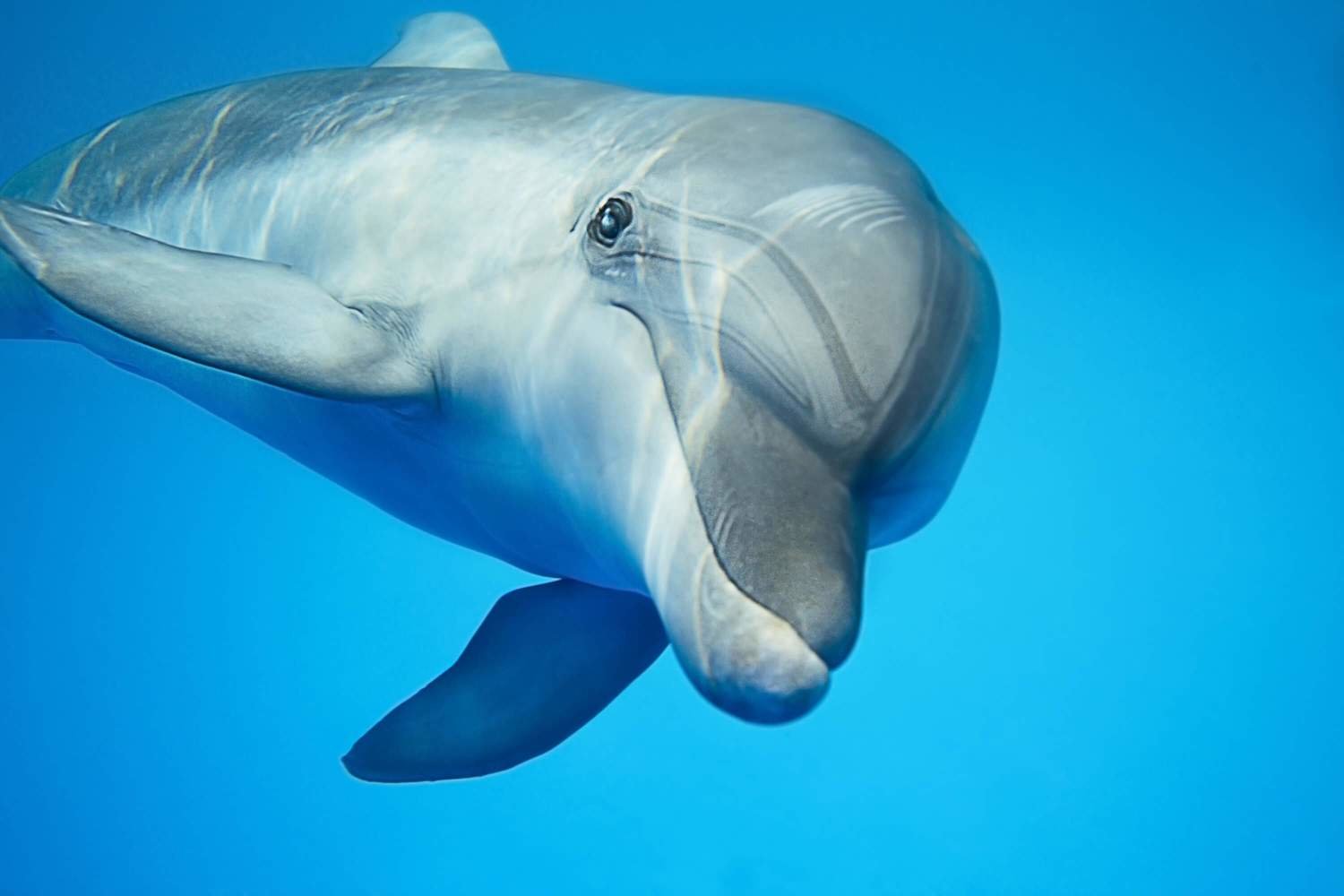 Your Adopt A Dolphin Kit comes in a Deluxe Folder and includes:

Adopt A Dolphin Kits make great gifts and can be sent directly to the recipient. Simply supply the recipient's name and mailing address as shipping information. We'll even include a letter stating the Adopt An Animal Kit is from you.

Dolphins belong to the same zoological order as whales. They are part of the family of toothed whales that also includes killer and pilot whales. They are mammals and breathe through a blowhole on the top of their head. Most dolphins have acute eyesight, both in and out of the water, and their sense of hearing is superior to that of humans. Though they have a small ear opening on each side of their head, it is believed that hearing underwater is also, if not exclusively, done with the lower jaw which conducts the sound vibrations to the middle ear via a fat filled cavity in the lower jaw bone. Hearing is also used for echolocation, which is an ability all dolphins have. The dolphin's sense of touch is also well developed.

Using echolocation to find prey, dolphins eat a variety of food including fish, squid and crustaceans. Dolphins often hunt together, surrounding a school of fish, trapping the fish, and taking turns swimming through the school and catching fish. Dolphins will also follow seabirds, other whales and fishing boats to feed opportunistically on the fish they scare up or discard.

Dolphins are well known for their agility and playful behavior, making them a favorite of wildlife watchers. Many species will leap out of the water, spy-hop (rise vertically out of the water to view their surroundings) and follow ships, often synchronizing their movements with one another. Scientists believe that by swimming alongside ships, a practice known as bow-riding, dolphins conserve energy. Dolphins live in social groups of five to several hundred.

Dolphins are widely believed to be amongst the most intelligent of all animals. Dolphins often leap above the water surface, sometimes performing acrobatic figures. Scientists aren't quite certain about the purpose of this behavior, but it may be to locate schools of fish by looking at above water signs, like feeding birds. They could also be communicating to other dolphins to join a hunt, attempting to dislodge parasites, or simply doing it for fun. Play is a very important part of dolphins' lives and they can often be observed playing with seaweed or playfighting with other dolphins. They have even been seen harassing other creatures, like seabirds and turtles. Dolphins also seem to enjoy riding waves and are frequently seen 'surfing' coastal swells and the bow waves of boats. They are also famous for their willingness to occasionally approach humans and playfully interact with them in the water. There are many stories of dolphins protecting shipwrecked sailors against sharks by swimming circles around the swimmers. A school of dolphins is also said to have pushed a fishing boat that was returning back out to sea after sensing the underwater disturbances generated by the 2004 Asian Tsunami.

Dolphins are social animals, living in pods (also called "schools") of up to a dozen animals. In places with a high abundance of food, schools can join temporarily, forming an aggregation called a superpod; such groupings may exceed 1,000 dolphins. The individuals communicate using a variety of clicks, whistles and other vocalizations. They also use ultrasonic sounds for echolocation. Membership in schools is not rigid; interchange is common. However, the animals can establish strong bonds between each other. This leads to them staying with injured or ill fellows for support.

Some dolphins teach their offspring to use tools. The animals break off sponges and put them onto their mouths, protecting the delicate body part during their hunt for fish on the seabed. This knowledge of how to use a tool is mostly transferred from mothers to daughters in dolphins, unlike simian primates, where the knowledge is generally passed onto all the offspring, irrespective of sex. The technology to use sponges as mouth protection is not genetically inherited, but a taught cultural behavior.

Threats to dolphins include marine pollution, habitat degradation, harvesting, low frequency sonar and entrapment in fishing gear. Some dolphin species face an uncertain future, especially the Amazon river dolphin and the Ganges river dolphin, which are critically or seriously endangered. Pesticides, heavy metals, plastics, and other industrial and agricultural pollutants that do not disintegrate rapidly in the environment concentrate in predators such as dolphins. Injuries or deaths due to collisions with boats, especially their propellers, are also common. Various fishing methods, most notably purse seine fishing for tuna and the use of drift and gill nets, kill many dolphins. In some parts of the world dolphins are killed in harpoon or drive hunts.

Hundreds of orcas, dolphins and other members of the dolphin family are held in captivity in the United States. While the Marine Mammal Protection Act (MMPA), passed in 1972, makes it more difficult to capture marine mammals from the wild, aquariums can still apply for permits or import animals caught in other countries. Whether wild caught or captive born, orcas and dolphins in captivity are sentenced to a life of confinement deprived of normal social and environmental interaction. Captured orcas and dolphins are confined to tanks as small as 24 feet by 24 feet wide and 6 feet deep. In tanks, the reverberations from their own sonar bouncing off walls drives some orcas and dolphins insane. Tanks are kept clean with chlorine, copper sulfate, and other harsh chemicals that irritate animals' eyes, causing many to swim with their eyes closed. Captured dolphins and orcas are often forced to learn tricks through food deprivation. Marine parks may withhold up to 60 percent of food before shows so that the animals will be "sharp" for performances. The stress of captivity is so great that some commit suicide.