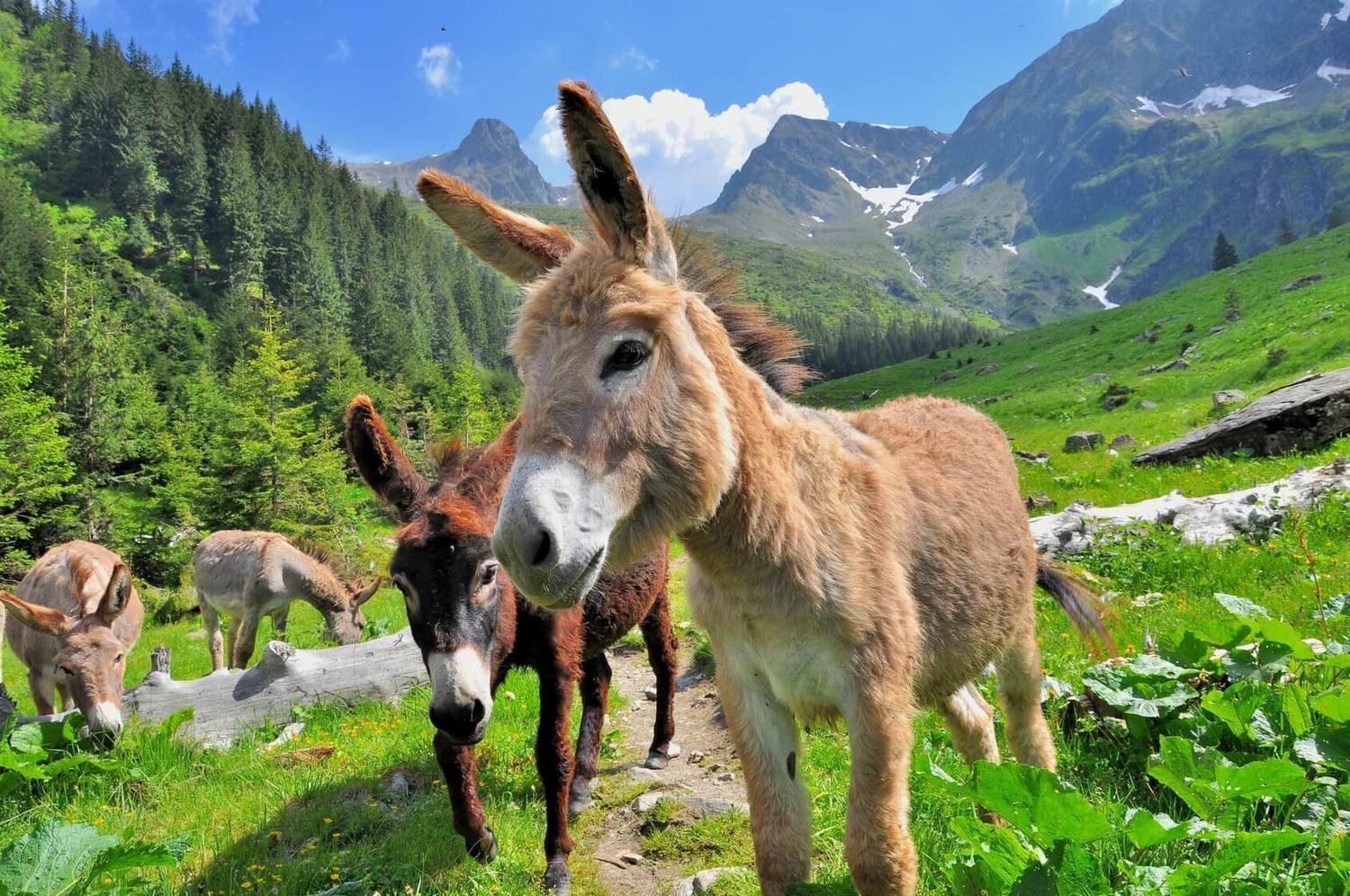 Your Adopt A Donkey Kit comes in a Deluxe Folder and includes:

Adopt A Donkey Kits make great gifts and can be sent directly to the recipient. Simply supply the recipient's name and mailing address as shipping information. We'll even include a letter stating the Adopt An Animal Kit is from you.

The donkey or ass, Equus africanus asinus, is a domesticated member of the horse family, Equidae. The wild ancestor of the donkey is the African wild ass, E. africanus. The donkey has been used as a working animal for at least 5000 years.

There are more than 40 million donkeys in the world, mostly in underdeveloped countries, where they are used principally as draught or pack animals. Working donkeys are often associated with those living at or below subsistence levels. Small numbers of donkeys are kept for breeding or as “pets” in developed countries.

Domesticated donkeys are also used as guard animals for goats, sheep and cows against the threat of coyotes. Coyotes are the only natural threat to donkeys.

Wild donkeys, called burros, live in desert plains, where they survive on little food and water for long periods.

A male donkey or ass is called a jack; a female a jenny or jennet; a young donkey is a foal. Jack donkeys are often used to mate with female horses to produce mules.

Donkeys were first domesticated around 3000 BC, probably in Egypt or Mesopotamia, and have spread around the world.

Donkeys vary considerably in size, depending on breed and management. The height at the withers ranges from 31 to 63 inches, and the weight from 180 to 1,060 lb. Working donkeys in the poorest countries have a life expectancy of 12 to 15 years; in more prosperous countries, they may have a lifespan of 30 to 50 years.

Donkeys are adapted to marginal desert lands. Unlike wild and feral horses, wild donkeys in dry areas are solitary and do not form harems. Each adult donkey establishes a home range; breeding over a large area may be dominated by one jack. The loud call or bray of the donkey, which typically lasts for twenty seconds and can be heard over long distances, may help them keep in contact with other donkeys over the wide spaces of the desert. Donkeys have large ears, which pick up more distant sounds and may help cool the donkey's blood. Donkeys can defend themselves by biting, striking with the front hooves or kicking with the hind legs.

A jennet is normally pregnant for about 12 months, though the gestation period varies from 11 to 14 months, and usually gives birth to a single foal. Births of twins are rare, though more common than in horses. Although jennets come into heat within 9 or 10 days of giving birth, their fertility remains low and it is usual to wait one or two further oestrous cycles before rebreeding.

Donkeys can interbreed with other members of the family Equidae, and are commonly interbred with horses. The hybrid between a jack and a mare is a mule. The hybrid between a stallion and a jennet is a hinny, and is less common. Like other inter-species hybrids, mules and hinnies are usually sterile. Donkeys can also breed with zebras in which the offspring is called a zonkey.

Donkeys have a notorious reputation for stubbornness. This has been attributed to a much stronger sense of self-preservation than exhibited by horses.

Although formal studies of their behavior and cognition are rather limited, donkeys are quite intelligent, cautious, playful, and eager to learn. Donkeys are affectionate animals and enjoy the companionship of people. Donkeys require companions or they become depressed. The donkey's favorite pastime is rolling.

Over 40 million donkeys exist worldwide. China has the most, followed by Pakistan, Ethiopia and Mexico. While domesticated species are increasing in numbers, the African wild ass and another relative, the onager, are endangered.

In many societies donkeys are regarded as low status animals and are commonly mistreated. They are forced to perform more work than their small bodies can handle. Since new donkeys are cheaper than veterinary care, ill and injured donkeys are often tied to posts without food or water and left to die.

In Spain and Greece, donkeys are used as "donkey taxis". Profit is placed above the care of the animals. They are exposed to temperature extremes with little or no food, shelter or water and are made to carry people too heavy for their bodies. At night their feet are tied together to prevent them from wondering off.

Donkeys are abused at live animal markets in China. Some restaurants offer fresh donkey meat where pieces of donkey are sliced off while the donkey is still alive.

Donkeys are sometimes kept as "pets", often poorly cared for. Many are left to fend for themselves. They develop deformed and crippled feet, become emaciated or obese and suffer from dental problems and parasite infestation.

Donkey basketball has been practiced in the United States since the 1930s. Donkey basketball involves human basketball players riding donkeys, usually as a fundraising event. The events typically take place in public schools where children are taught that animal abuse and humiliation is entertaining. The donkeys are often dragged, kicked and punched by participants who have no animal-handling experience. Unethical commercial firms provide donkeys and equipment, splitting the proceeds with the hiring party. Donkey basketball is inhumane and cruel to animals.

Donkeys are not protected by the federal Animal Welfare Act.