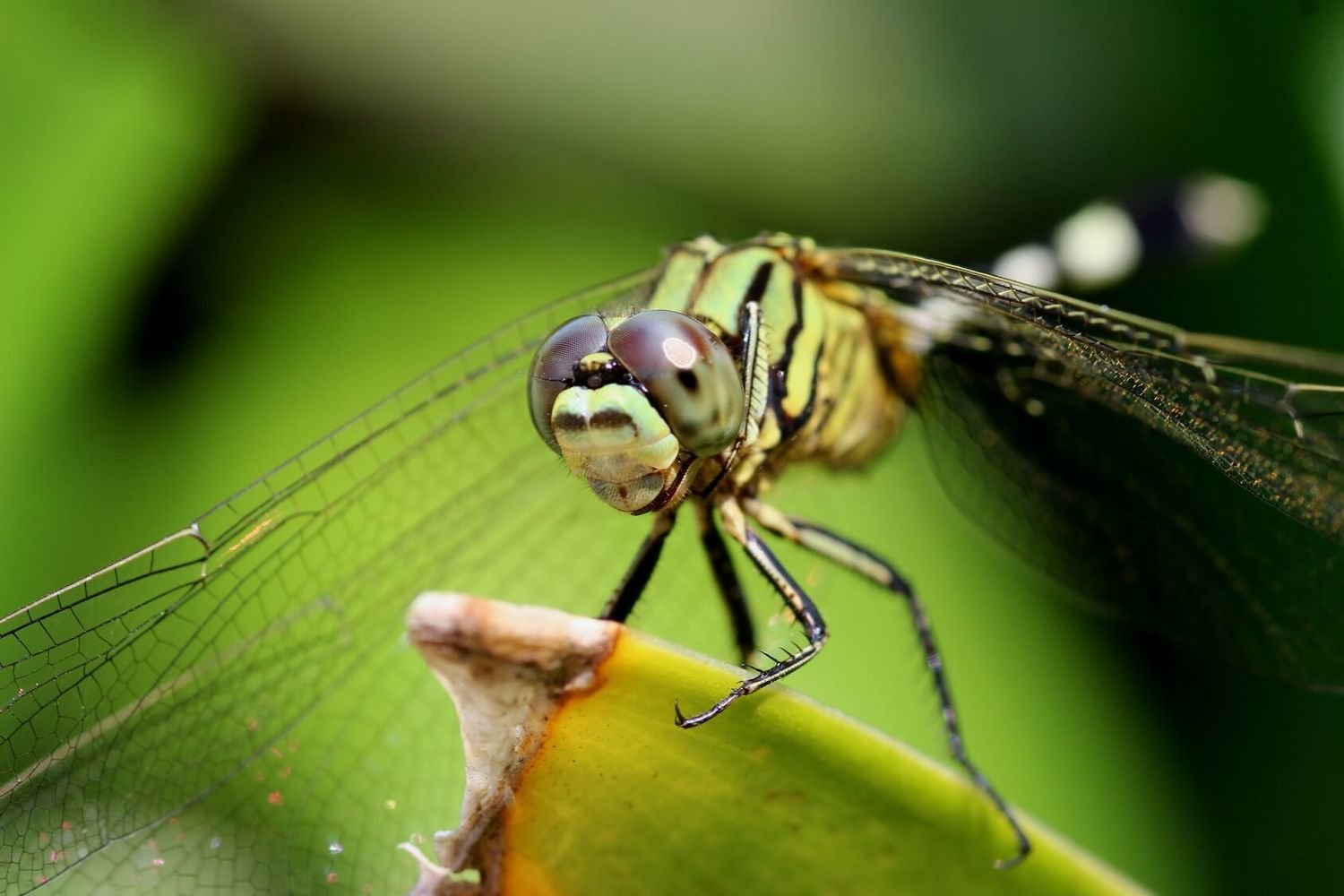 Your World Animal Foundation Adopt A Dragonfly Kit comes in a Deluxe WAF Folder and includes:

Adopt A Dragonfly Kits make great gifts and can be sent directly to the recipient. Simply supply the recipient's name and mailing address as shipping information. We'll even include a letter stating the Adopt An Animal Kit is from you.

A dragonfly is an insect belonging to the suborder Anisoptera. Dragonflies have large multifaceted eyes, two pairs of strong transparent wings, sometimes with colored patches, and an elongated body. Many dragonflies have brilliant iridescent or metallic colors produced by structural coloration, making them conspicuous in flight.

There are about 3000 species of dragonflies in the world today. Most are tropical, with a few species in temperate regions.

Dragonflies are predators, both during the aquatic larval stage, when they are known as nymphs, and as adults. Up to several years of the insect's life is spent as a nymph living in freshwater; the adults may be on the wing for just a few days or weeks. They are fast agile fliers, sometimes migrating across oceans, and are often but not always found near water.

Many dragonflies, particularly males, are territorial. Some defend a territory against others of their own species, some against other species of dragonfly and a few against insects in unrelated groups. Defending a breeding territory is fairly common among male dragonflies, especially among species that congregate around ponds in large numbers. The territory will contain desirable features such as a sunlit stretch of shallow water, a special plant species or a particular substrate that is necessary for egg-laying. The territory may be small or large, depending on its quality, the time of day and the number of competitors, and may be held for a few minutes or several hours. Some dragonflies signal ownership with striking colors on their face, abdomen, legs or wings. Other dragonflies engage in aerial dogfights or high speed chases. Any female will need to mate with the territory holder before laying her eggs.

Dragonflies have a uniquely complex method of reproduction. During mating, the male grasps the female at the back of the head or on the prothorax, and the female curls her abdomen under her body to pick up sperm from the male's secondary genitalia at the front of his abdomen, forming the "heart" or "wheel" posture.

Egg-laying involves the female darting over floating or waterside vegetation to deposit eggs, with the male hovering above her or continuing to clasp her and flying in tandem. The male attempts to prevent rivals from removing his sperm and inserting their own. When the female submerges to deposit eggs, the male may help to pull her out of the water.

A clutch of eggs may number as many as 1,500, and they take about a week to hatch. Most of a dragonfly's life is spent as a nymph, beneath the water's surface. The nymph feeds on animals such as mosquito larvae, tadpoles and small fish. They breathe through gills in their rectum, and can rapidly propel themselves by suddenly expelling water through the anus.

The larval stage of large dragonflies lasts up to five years in large species, and between two months and three years in smaller species. When ready to metamorphose into an adult, dragonfly babies stop feeding and go to the surface, generally at night. They remain stationary with heads out of the water while their respiration system adapts to breathing air. They then climbs up a plant, and moult. The adult dragonfly crawls out of its larval skin.

Dragonflies are powerful and agile fliers, capable of migrating across oceans, moving in any direction and changing direction suddenly. In flight, the adult dragonfly can propel itself in six directions: upward, downward, forward, back, to left and to right.

Being cold-blooded, dragonflies raise their temperature by basking in the sun. Early in the morning they may choose to perch in a vertical position with the wings outstretched. In the middle of the day, a horizontal stance may be chosen. Another method of warming up used by some larger dragonflies is wing-whirring, a rapid vibration of the wings that causes heat to be generated in the flight muscles. Becoming too hot is another hazard, prompting a dragonfly to find shady area for perching.

Adult dragonflies hunt on the wing using their exceptionally acute eyesight and strong agile flight. They are almost exclusively carnivorous, eating a wide variety of insects ranging from small midges and mosquitoes to butterflies, moths, damselflies and smaller dragonflies.

Although dragonflies are swift and agile fliers, there are predators fast enough to catch them. These include falcons such as the American kestrel, the merlin and the hobby. Nighthawks, swifts, flycatchers and swallows also take some adults, as well as some species of wasp. In the water, various species of duck and heron eat dragonfly larvae and they are also preyed on by newts, frogs, fish and water spiders.

Loss of wetland habitat threatens dragonfly populations around the world. With the destruction of rainforest habitats, many species are in danger of becoming extinct before they have even been named. The greatest cause of decline is forest clearance with the consequent drying up of streams and pools which become clogged with silt. The damming of rivers for hydro-electric plants and the drainage of low-lying land has reduced suitable habitat, as has pollution and the introduction of alien species.

Habitat degradation has reduced dragonfly populations across the world, for example in Japan. Over 60% of Japan's wetlands were lost in the twentieth century, so its dragonflies now depend largely on rice fields, ponds and creeks. Dragonflies feed on pest insects in rice, acting as a natural pest control. Dragonflies are steadily declining in Africa, and represent a conservation priority.

The dragonfly's long lifespan and low population density makes them vulnerable to disturbance, such as from collisions with vehicles on roads built near wetlands. Species that fly low and slow may be most at risk. Dragonflies are used in traditional medicine in Japan and China, and caught for food in Indonesia.