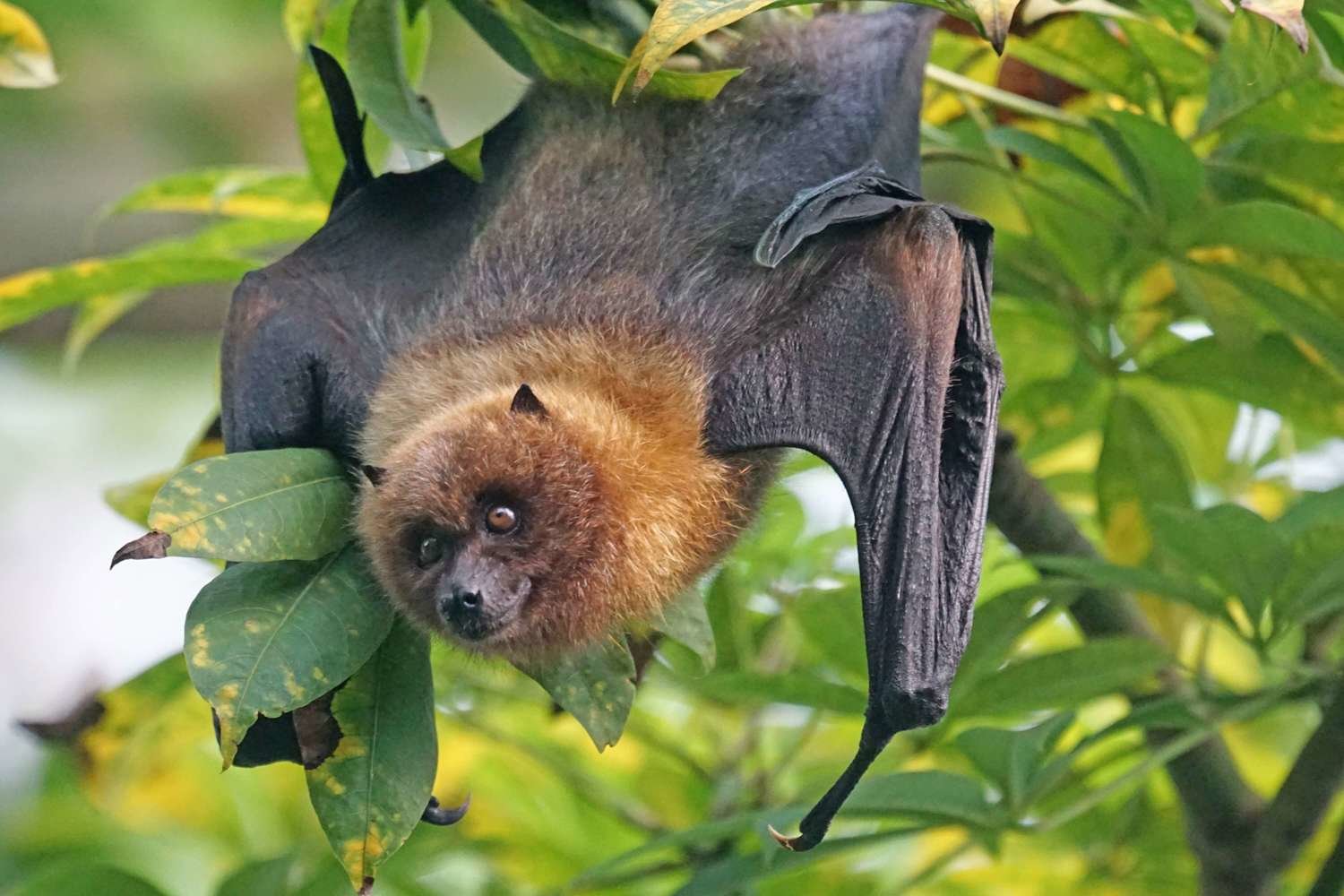 Adopt A Fruit Bat Kits make great gifts and can be sent directly to the recipient. Simply supply the recipient's name and mailing address as shipping information. We'll even include a letter stating the Adopt An Animal Kit is from you.

Bats are often unappreciated but are actually beneficial by providing controls of insects that may spread diseases or are annoying and harmful to our outdoor activities. They are vitally important in agricultural settings as well by controlling potential insect crop pests and the spread of plant diseases. Some bats even help spread fruit seeds and pollen.

Bats are the only mammals capable of true flight. The bat's wing anatomically resembles the human hand, with extremely elongated fingers and a wing membrane stretched between. Over 1,000 bat species can be found worldwide. In fact, bats make up a quarter of all mammal species on earth. Thirteen species of bat are listed as endangered.

Because their wings are much thinner than those of birds, bats can maneuver more quickly and more precisely than birds. The surface of their wings are also equipped with touch sensitive receptors on small bumbs called "Merkel cells", which is found in most mammals, including humans. But these sensitive areas are different in bats as there are tiny hairs in the center, making it even more sensitive and they detect and collect information about the air flowing over the wings. Another kind of receptor cells are found in the wing membrane in species who are using their wings to catch prey, and is sensitive to the stretching of the membrane. These cells are concentrated in the areas of the membrane where insects hit the wings when the bats capture them.

Bats are divided into two suborders: Megachiroptera, meaning large bat, and Microchiroptera, meaning small bat. The largest bats have a 6 foot wing span. The bodies of the smallest bats are no more than an inch long. While some bat populations number in the millions, others are dangerously low or in decline. Most bats live longer than most mammals of their size. The longest known lifespan of a bat in the wild is 30 years for a little brown bat. Bats can be found almost anywhere in the world except the polar regions and extreme deserts. They find shelter in caves, crevices, tree cavities, and buildings.

Bats specialize in different foods. Seventy percent of all bats consume insects. There are also fruit-eating bats; nectar-eating bats; carnivorous bats that prey on small mammals, birds, lizards, and frogs; fish-eating bats; and the blood-eating vampire bats of South America. Some of the smaller bat species are important pollinators of some tropical flowers. Indeed, many tropical plants are now found to be totally dependent on them, not just for pollination, but for spreading their seeds by eating the resulting fruits.

Some bats have evolved a highly sophisticated sense of hearing. They emit sounds that bounce off of objects in their path, sending echoes back to the bats. From these echoes, the bats can determine the size of objects, how far away they are, how fast they are traveling, and even their texture — all in a split second.

Most fruit bats don't use echolocation. Fruit bats rely on their large eyes and sense of smell to find food.

Bats vary in social structure, with some bats leading a solitary life and others living in caves colonized by more than a million bats. The fission fusion social structure is seen among several species of bats. The fusion part is all the individuals in a roosting area. The fission part is the breaking apart and mixing of subgroups by switching roosts with bats, ending up with bats in different trees and often with different roostmates. Studies also show that bats make all kinds of sounds to communicate with each other. Scientists in the field have listened to bats and have been able to identify some sounds with some behavior bats will make right after the sounds are made.

For their size, bats are the slowest reproducing mammals on earth. The vast majority of bats bear only one offspring a year. A baby bat at birth weighs up to 25 percent of its mother's body weight, which is like a human mother giving birth to a 31-pound baby. Offspring typically are cared for in maternity colonies, where females congregate to bear and raise their young. A baby bat is referred to as a pup. Pups are usually left in the roost when they are not nursing. However, a newborn bat can cling to the fur of the mother like a pouch and be transported, although they soon grow too large for this. It would be difficult for an adult bat to carry more than one young, but normally only one young is born. Bats often form nursery roosts, with many females giving birth in the same area, be it a cave, a tree hole, or a cavity in a building. Mother bats are able to find their young in huge colonies of millions of other pups. Pups have even been seen to feed on other mothers' milk if their mother is dry. Only the mother cares for the young, and there is no continuous partnership with male bats. The ability to fly is congenital, but after birth the wings are too small to fly. Young microbats become independent at the age of 6 to 8 weeks, megabats not until they are four months old. At the age of two years bats are sexually mature.

Most bats hibernate from November through March because their food source (insects) is relatively scarce during the winter months.

The greatest threat to bats is people. Habitat destruction and fear are a lethal combination for bats. In some areas, people have even been known to set fires in caves, destroying thousands of roosting bats.

Bat populations are declining worldwide, some due to habitat loss, but mainly due to a relatively new disease called White-Nose Syndrome (WNS). This disease kills many hibernating bats annually by sapping their energy reserves that have been stored up to survive the long winter months. WNS causes the bats to awaken, possibly several times during the winter, which further drains the bat’s energy reserves. The disease may also damage their air passages and wings.

Protecting areas where bats hibernate (hibernacula) and staying out of caves in the winter months helps to avoid the potential spread of WNS. Creating habitat by retaining shaggy bark trees like white oak and shagbark hickory provides roosting sites during summer months for many bats. Restoring or creating areas like ephemeral pools and wetlands also create potential food sources in the summer.