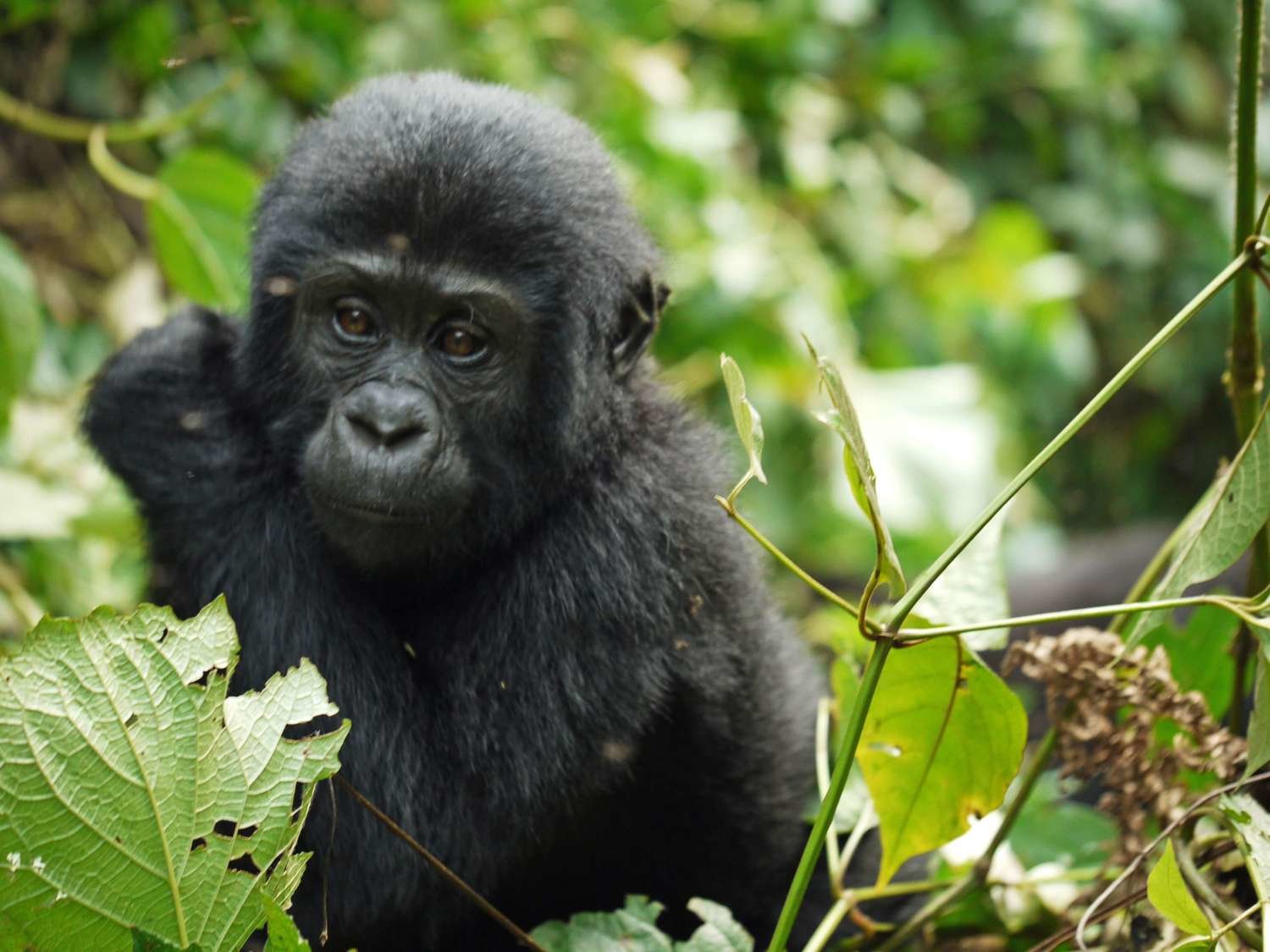 Your World Animal Foundation Adopt A Gorilla Kit comes in a Deluxe WAF Folder and includes:

Adopt A Gorilla Kits make great gifts and can be sent directly to the recipient. Simply supply the recipient's name and mailing address as shipping information. We'll even include a letter stating the Adopt An Animal Kit is from you.

Male mountain gorillas reach an average of 6 feet tall (when standing upright) and weigh 400 to 500 pounds, making them the largest of the great apes (chimpanzees, orangutans, and gorillas). Females are smaller, standing an average of 4 to 5 feet tall and weighing 150 to 200 pounds.

The dense, forest ecosystems of the mountains of East Africa are the last remaining habitat of the mountain gorilla. Fewer than 650 mountain gorillas survive today in two geographically isolated populations. Approximately 320 gorillas inhabit the Virunga volcanoes region of Rwanda, Zaire, and Uganda, while the remaining number inhabits Uganda's Bwindi National Park. Gorillas live up to 53 years.

Mountain gorillas eat large amounts of vegetation and spend about 30 percent of each day foraging for food. They consume roots, leaves, stems of herbs, vines, bark from trees, shrub-sized plants, and bamboo shoots.

Mountain gorillas are shy, retiring animals. They live in social groups of 2 to 35 individuals. An adult male silverback is the leader and protector of his band, which consists of females and offspring. Silverbacks will charge anything that threatens them or their group and are known for their chest beating displays when in danger.

A silverback is an adult male gorilla, typically more than 12 years of age and named for the distinctive patch of silver hair on his back. A silverback gorilla has large canines that come with maturity. Blackbacks are sexually mature males of up to 11 years of age. Silverbacks are the strong, dominant troop leaders. Each typically leads a troop of 5 to 30 gorillas and is the center of the troop's attention, making all the decisions, mediating conflicts, determining the movements of the group, leading the others to feeding sites and taking responsibility for the safety and well being of the troop.

Males will slowly begin to leave their original troop when they are about 11 years old, traveling alone or with a group of other males for 2–5 years before being able to attract females to form a new group and start breeding. While infant gorillas normally stay with their mother for 3–4 years, silverbacks will care for weaned young orphans.

If challenged by a younger or even by an outsider male, a silverback will scream, beat his chest, break branches, bare his teeth, then charge forward. Sometimes a younger male in the group can take over leadership from an old male. If the leader is killed by disease, accident, fighting or poachers, the group will split up, as animals disperse to look for a new protective male. Very occasionally, a group might be taken over in its entirety by another male. There is a strong risk that the new male may kill the infants of the dead silverback.

Females reach breeding age at about 10 years old. They typically bear young every four to five years, giving birth after a gestation period of eight to nine months. Young gorillas cling to their mother's chests until they are old enough to ride on her back. A young gorilla remains with its mother until 5 years of age.

Gorillas are often victims of captivity for human entertainment. Even under the best of circumstances, captivity is cruel for gorillas. Confined to tiny cages and gawked at by crowds, animals in exhibits and acts endure constant stress. They may suffer from temperature extremes and irregular feeding and watering. Without exercise, they become listless, their immune systems are weakened, and they become prone to sickness; many resort to self-mutilation in reaction to stress or boredom. Mental illness is rampant among confined animals. Torn from their families and deprived of all dignity, every part of their lives is controlled by their captors.