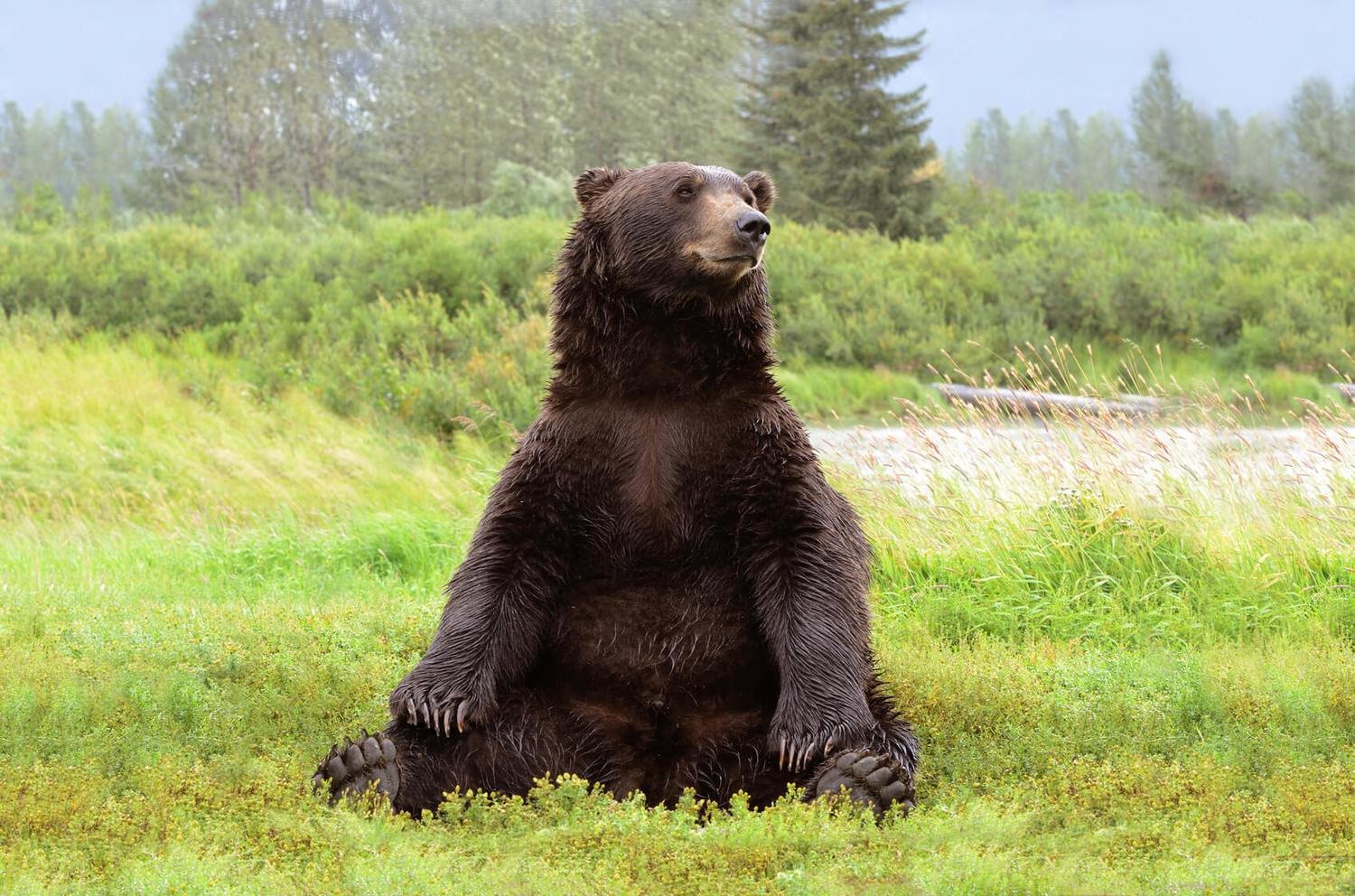 Adopt A Grizzly Bear Kits make great gifts and can be sent directly to the recipient. Simply supply the recipient's name and mailing address as shipping information. We'll even include a letter stating the Adopt An Animal Kit is from you.

The grizzly bear (also known as the brown bear) is a large predator distinguished from black bears by a distinctive hump on the shoulders, a dished profile to the face, and long claws about the length of a human finger. Coloration is usually darkish brown but can vary from very light cream to black. The long guard hairs on their back and shoulders often have white tips and give the bears a "grizzled" appearance, hence the name "grizzly."

Grizzly bears vary greatly in size. Adult males can weigh from 300 to 850 pounds while females weigh in between 200 and 450 pounds. The largest brown bears are found along the coast of Alaska and British Columbia, and islands such as Kodiak and Admiralty Islands. Here, because of a consistent diet of high protein salmon, males average over 700 pounds and females average about 450 pounds. European brown bears and brown bears from the interior of North America average about two-thirds the size of these large coastal brown bears. Despite this large size, brown bears are extremely agile and fast, reaching speeds of 35 to 40 mph.

Grizzly bears are found in a variety of habitats, from dense forests, to subalpine meadows and arctic tundra. The brown bear is thought to have adapted to the life of a plains or steppe animal and was once common on the Great Plains of North America. Human encroachment has forced the remaining brown bear populations to select rugged mountains and remote forests that are undisturbed by humans.

In the Lower 48 states there are 800 - 1,020 grizzly bears surviving. Of these, about 350 live in northwestern Montana, 350-400 live in or around Yellowstone National Park, about 30 in the Selkirk Mountains in northern Idaho/northeast Washington, about 30 live in the Cabinet-Yaak ecosystem in northern Idaho/western Montana, and perhaps 20 live in the North Cascades of upper Washington State. In Alaska, there are about 30,000.

Females reach sexual maturity at 4 to 7 years old and breed in early May through mid-July. Bears experience "delayed implantation" so that the fertilized egg does not begin to develop until November, enabling the young to be born in January or February while the mothers are hibernating in a den. Cubs are about 1 - 1½ pounds when born and litter sizes range from 1 - 3, but two is most common. Cubs will remain with their mothers for at least 2 - 4 years, and females won’t breed again while in the company of their young. Thus, the breeding interval is three or more years between successive litters.

Grizzly bears are omnivores and will eat both vegetation and animals. Grasses, sedges, roots, berries, insects, fish, carrion and small and large mammals are all part of a bear's diet. In some areas they have become significant predators of large hoofed mammals such as moose, caribou and elk. In other areas a large, consistent supply of food like salmon have led to behavioral changes that allow large congregations of brown bears to share an abundant resource. The diet of brown bears varies depending on what foods are available in that particular season or habitat.

Bears live solitary lives except during breeding, cub rearing, and in those areas with a super-abundant food supply such as salmon streams. Brown bears hibernate during the winter for 5-8 months, depending on the location, and usually dig their dens on north-facing slopes to ensure good snow cover. Brown bears need to eat a lot in the summer and fall in order to build up sufficient fat reserves for surviving the denning period. This is particularly true for pregnant females who give birth to one-pound cubs and then nurse them to about 20 pounds before emerging from the den in April - May...all the time without eating or drinking. These bears will defend their territories, and mothers are known for their ferocity in defending their cubs. Brown bears can live up to 30 years in the wild, though 20 - 25 is normal.

Most of the threats to the survival of grizzly bears are associated with degradation of habitat due to development, logging, road-building and energy and mineral exploration. Habitat destruction in valley bottoms and riparian areas is particularly harmful to grizzlies because they use these as "corridors" to travel from one area to another. Another major threat to the brown bear is human-caused mortality. Some brown bears are killed by hunters who mistake them for black bears, a legal game species. Other bears become habituated to humans because of what biologists call "attractants," which include garbage, pet foods, livestock carcasses, and improper camping practices. This can eventually lead to conflicts between people and bears - not only in populated areas of the grizzly's range, but also in back-country recreation sites and removal of the bear. And lastly, illegal killing (poaching) of bears remains another factor leading to their decline.

Grizzly bears are also victims of the animal entertainment industry. They are found on display at zoos, denied their wild nature, strong family bonds and natural social interactions. Like all captive wildlife, they face constant stress and are denied their wild nature and social structures. The needs and desires of humans comes before the needs of the animals in the animal entertainment industry.