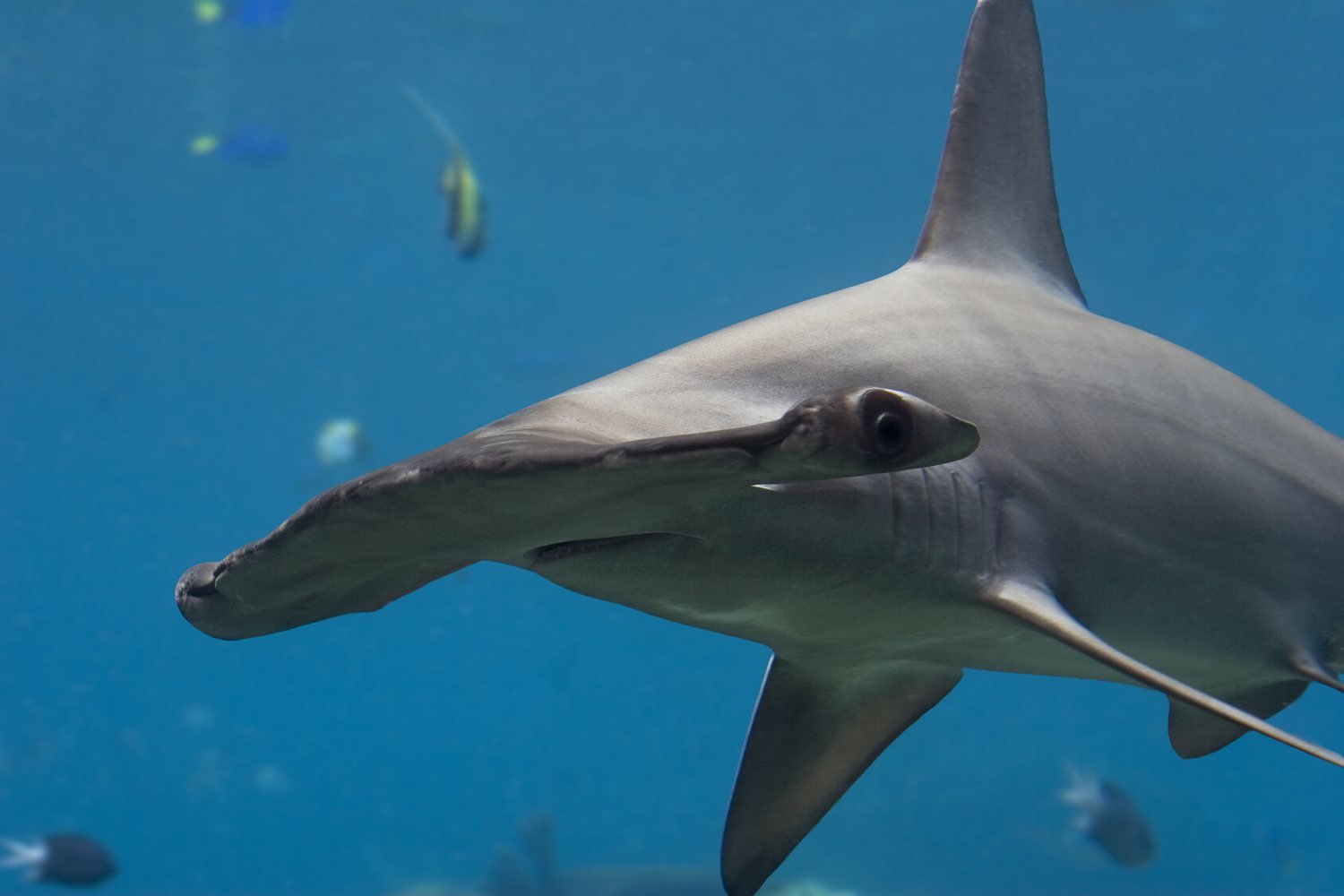 Your Adopt A Hammerhead Shark Kit comes in a Deluxe Folder and includes:

Adopt A Hammerhead Shark Kits make great gifts and can be sent directly to the recipient. Simply supply the recipient's name and mailing address as shipping information. We'll even include a letter stating the Adopt An Animal Kit is from you.

Hammerhead sharks, which belong to the family Sphyrnidae, are some of the most unique looking creatures in the ocean. There are ten distinct species of these sharks, which most people recognize by their distinctive head shape; a flattened, extended structure that’s called a cephalofoil. (A related and slightly different hammerhead species, the winghead shark, is classified under the family name Eusphyra instead.)

Hammerhead sharks tend to prefer warm water living, so they’re usually found in ocean habitats that are close to coastlines and continental shelves – they’ve been found in the Gulf of Mexico and off the Californian coast, as well as in Colombian, Costa Rican, Hawaiian, Australian, and southern and eastern African coastal waters. Depending on the year and weather phenomena such as El Niño conditions, some hammerheads may migrate seasonally, swimming towards warmer waters closer to the equator in the winter and northward towards the poles in the summer.

These large sharks can grow to quite a significant size, depending on their age and sex. The largest species, the great hammerhead, can range from 3 feet to over 19 feet in length, and may weigh from 6.6 to as much as 1,278 pounds. Other species of hammerheads are usually much smaller, however, and all species of hammerheads have an average lifespan of 25 to 35 years.

They’re light in color with a tall, straight dorsal fin, and their slight green skin tint and white underbelly allows them to blend well into the ocean and sneak up on prey below.

A hammerhead’s head shape, of course, is the most interesting part of their anatomy; their heads have flat projections that extend out on either side, with their eyes actually placed on either side of the hammer shape at the outer edges allowing them a 360 degree view of what’s above and below them at all times.

All sharks have special sensory pores that detect the tiny electrical fields made by other animals (called ampullae of Lorenzini), but on a hammerhead shark, these pores are spread out over a wider area giving them a larger advantage when sweeping for their next meal to eat.

Typically, hammerheads have a smaller mouth than other sharks, hunting mainly close to the bottom of the ocean. Some species (like the scalloped and smooth hammerhead) travel in schools with other hammerheads during the day, though they separate themselves to hunt alone at night.

Hammerheads are efficient and carnivorous ocean hunters that eat a range of different prey, including fish, squid, octopus, crustaceans, and sometimes other sharks. Their favorite food, however, is stingrays, which they stalk and pin down with their mallet-shaped head. Great hammerhead sharks are more likely to occasionally eat other hammerheads, including their own young on occasion.

Reproduction can also be a rather dangerous business for hammerhead females. Usually happening only once a year, a female shark is persuaded to mate with a male hammerhead by violent episodes of biting until she agrees to the coupling. After sperm is transferred to the female, eggs are fertilized inside her and embryos begin to develop, at first being nourished only by a yolk sac. After the yolk is gone, however, the sac then transforms into a structure that resembles a mammal’s placenta, allowing the young sharks to be sustained by the mother’s body until they’re developed enough to be born. At this point, the mother can give birth to a litter of 12 to 15 live shark pups (great hammerheads can birth up to 40 pups), which tend to be born in the spring or summer months, and stay together for protection and safety as they swim for warmer, shallower waters. Neither of the shark parents provides any further care to the pups after birth.

As for their threat to people, most hammerheads are harmless, and only three hammerhead species have been noted as being dangerous at all. Scalloped, great, and smooth hammerheads have been known to attack humans, but there are no listed deaths on record for a hammerhead attack against a person.

Unfortunately for these fascinating fish, we humans are their largest threat. Overfishing and the shark fin trade (where a shark’s fins are harvested as a delicacy, but the remainder of the shark is thrown back into the ocean) have put some hammerhead species at risk of extinction.

Two species, the great and scalloped hammerhead, are listed by the World Conservation Union as endangered, and the smalleye hammerhead has a ‘vulnerable’ status.

Interestingly, Hawaii may be one of the safest places for hammerhead sharks to exist at the moment. Native Hawaiian culture reveres sharks, believing some species to be reincarnated family members or the chosen ‘birth animals’ for some children, and the hammerhead shark in particular is seen as a highly respected animal and a good omen.