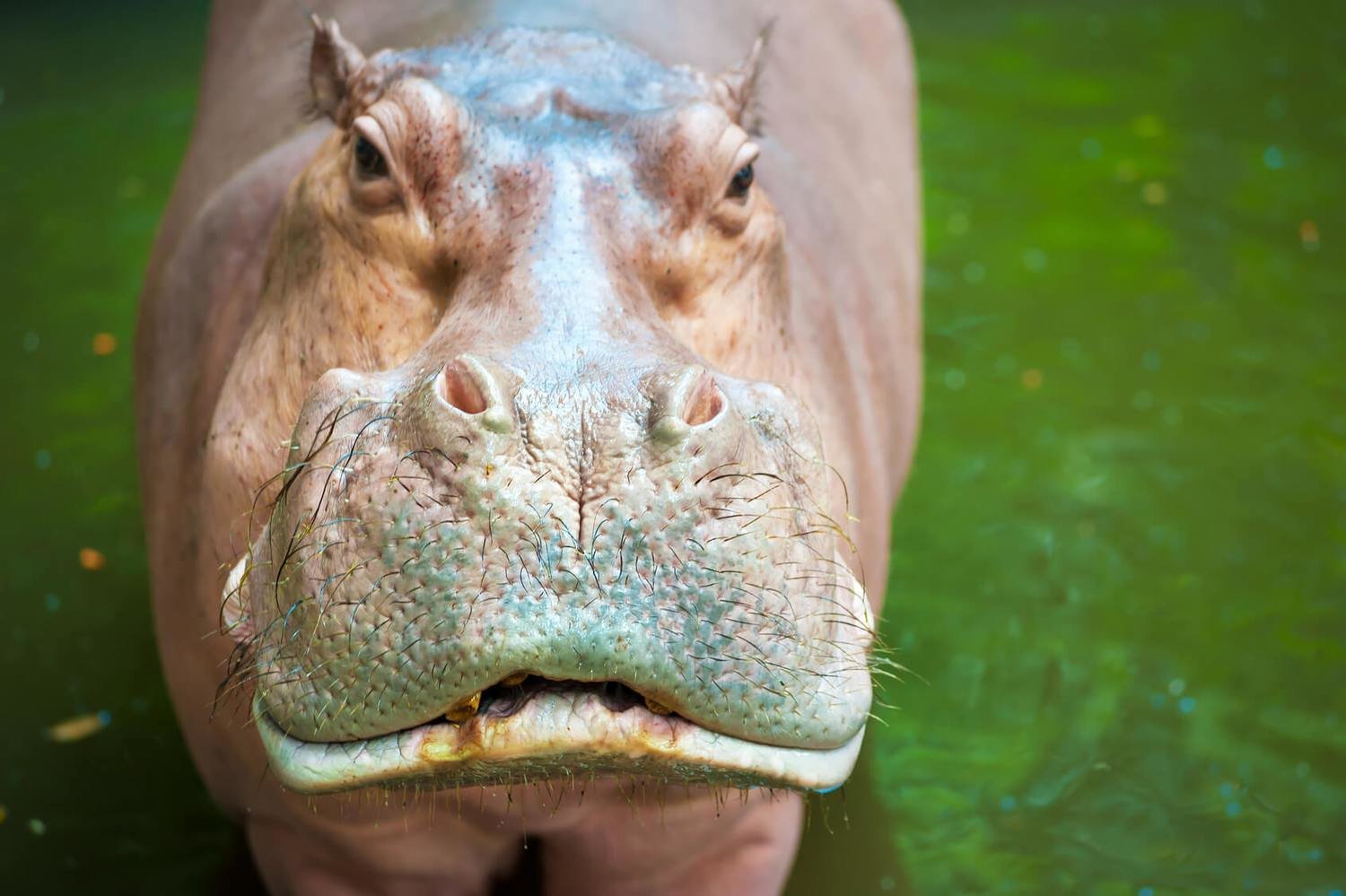 Your World Animal Foundation Adopt A Hippopotamus Kit comes in a Deluxe WAF Folder and includes:

Adopt A Hippopotamus Kits make great gifts and can be sent directly to the recipient. Simply supply the recipient's name and mailing address as shipping information. We'll even include a letter stating the Adopt An Animal Kit is from you.

Hippopotamus is an herbivorous, river-living mammal of tropical Africa. The large hippopotamus, hippopotamus amphibius, has a short-legged, broad body with a tough gray or brown hide. Males stand about 5 feet high at the shoulder and weigh about 5 tons; females are slightly smaller. Their mouths are wide, and the incisors and lower canines are large ivory tusks that grow throughout life. Their eyes are near the top of their heads, so they can see when nearly submerged.

The large hippopotamus outweighs all the many fresh water semi-aquatic mammals that inhabit our rivers, lakes and streams. The pygmy hippopotamus, though, are only 30 inches tall at the shoulder and weigh about 400 pounds. They tend to be solitary and spend much of their time on the shore, sleeping by day in thickets.

Hippopotamuses usually live in herds of about 15 animals. Much of their time is spent standing or swimming underwater, where they feed on aquatic plants; they must rise to breathe every 5 minutes or so. At night, groups of animals feed on the shore.

The ancient Egyptians both feared and revered the hippopotamus. The word hippopotamus comes from the Greek for “river horse” and the hippo, once indigenous to Egypt, flourished there. They grazed along the fertile banks of the Nile River and swimming in its muddy waters. Hippos may seem slow and lumbering, but they can be ferocious, deadly killers. These prolific animals multiplied until the river was thick with them. They destroyed crops, up ended fishing boats and killed the men as they fell into the river. The ancient kings found sport in great hippopotamus hunts that would thin out the herds. Hunts became bloody battles between man and beast. The hippo is no longer found in Egypt. They were wiped out of that country in modern times because of the crop damage they caused, but the hippo still thrives in other parts of Africa.

After elephants and the white rhinoceros, the hippopotamus is the third largest land mammal on earth. On land, the enormous weight of a hippo is distributed evenly and is adequately supported by the four webbed toes on each of their feet. These animals are grayish in color with thick skin that is virtually hairless. The hippo has no sweat or sebaceous glands and must rely on the water to keep cool. A hippo’s skin has the unusual property of secreting a red fluid that protects them from the sun. This specialized excretion may also be a healing agent.

Female hippopotamus bear a single young and will give birth either on land or in shallow water. The mother helps the newborn to the surface of the water. In time, she will teach her baby to swim. Newborns can be seen in the river, resting on their mothers' backs. At birth, a baby hippo will weigh from 55 to 120 pounds. The mother must protect the baby from crocodiles in the water and lions on land. She must also ward off male hippos. Strangely, males do not bother baby hippos when on land, but they will attack them in the water.

Adult hippos can stay under water for up to six minutes. A young hippo can only stay submerged for about half a minute. In order to suckle under water, the baby must take a deep breath, close its nostrils and ears and then wrap its tongue tightly around the teat to suck. This instinctive behavior is the same when the baby suckles on land. Baby hippos start to eat grass at 3 weeks, but will continue to nurse until they are about one year old.

Hippos are usually found in groups of just over a dozen, presided over by a territorial bull. They have flexible social systems defined by food and water conditions and hierarchy. Periods of drought will force them to congregate in large numbers around a limited water supply. This overcrowding disrupts the system, and under these conditions there will be higher levels of aggression. Fights for dominance will be brutal with loud and frequent vocalization. Hippos can bear the scars of old, deep wounds sustained in such battles. A hippo establishes status and marks territory by spreading its excrement with its flat, paddle-like tail.

Hippos move surprisingly well, climbing adeptly up steep riverbanks to grazing areas. They spend the heat of the day in the water, leaving it to graze at night. Apparently creatures of habit, they enter and exit the water at the same spot. They will graze four to five hours, usually covering one or two miles. The amount of grass consumed is relatively modest for animals their size. A hippo’s appetite is in proportion to its sedentary life.

The hippopotamus is hunted for meat, and Africans have used the hide for shields and whips. Once widespread in Africa, the animal is now rare except in unsettled areas and reserves.

Despite the fact that ditches and low fences can easily deter them from encroaching on cultivated areas, hippopotamus are slaughtered by the hundreds each year. These “controlled management” schemes are put forth less for crop protection than for the meat they yield. The fat and ivory tusks of the hippo are also of value to humans, as is the hippo’s grazing land. The hippos’ range was once from the Nile delta to the Cape, but the mighty river horse is now mostly confined to protected areas.