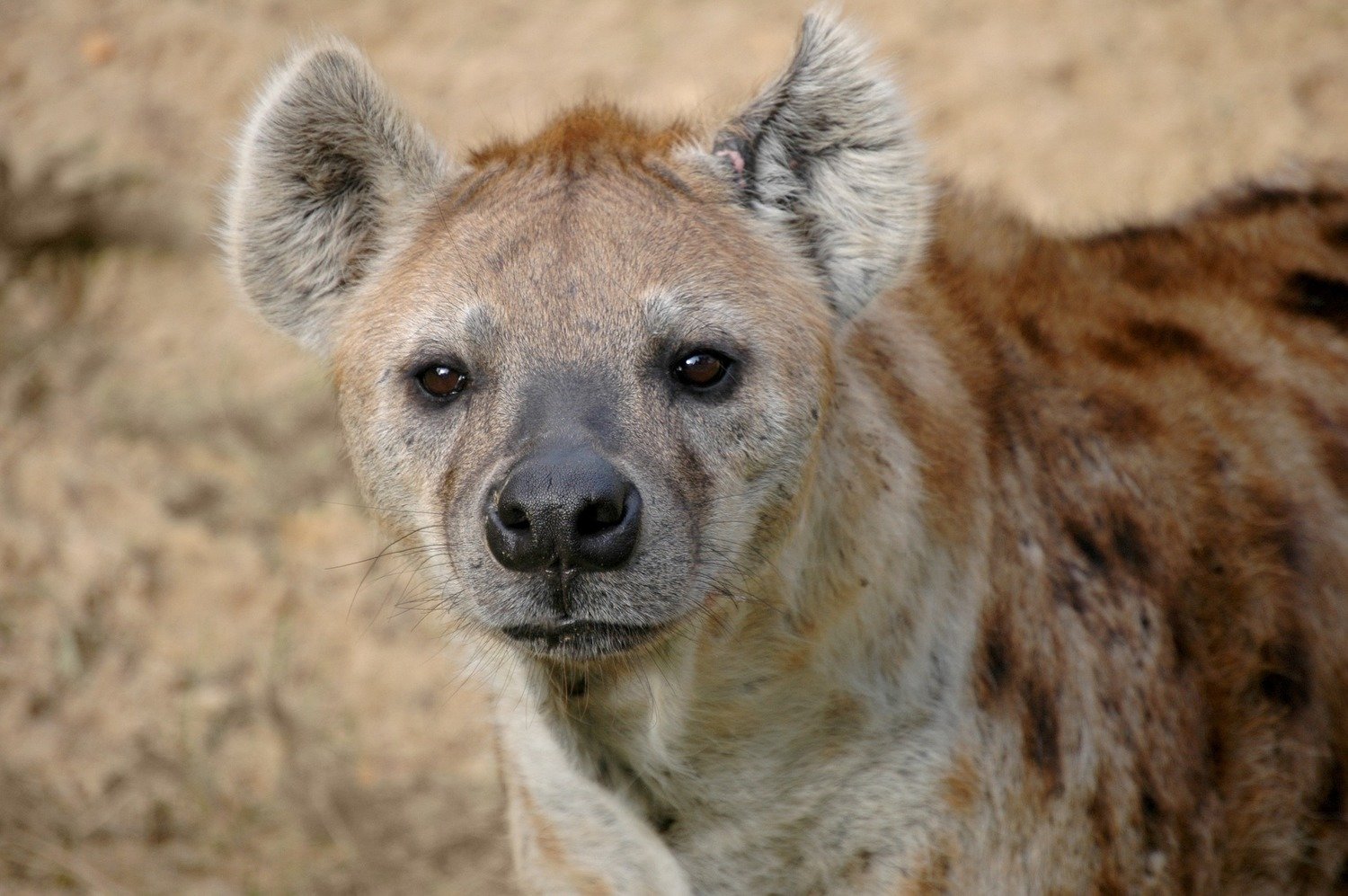 Your Adopt A Hyena Kit comes in a Deluxe Folder and includes:

Adopt A Hyena Kits make great gifts and can be sent directly to the recipient. Simply supply the recipient's name and mailing address as shipping information. We'll even include a letter stating the Adopt An Animal Kit is from you.

Hyena are dog-like mammals native to parts of Asia and Africa. Once ranging across Africa, Asia and Europe, hyenas are mostly limited to the African Savannah today, with the exception of the striped hyena inhabiting the jungles of India and western Asia. Hyenas live in savannas, grasslands, forests and sub-deserts. They are one of the most abundant large carnivores in Africa.

There are four known species of hyena: the striped hyena, the spotted hyena, the brown hyena and the aardwolf. All four hyena species have a bear-like stance. Their front legs are longer than their back legs. The brown hyena, the striped hyena and the aardwolf have striped manes on top of their neck that stand erect when the hyena is frightened. The spotted hyena's mane is much shorter than the other hyena species and stands erect most of the time.

Most hyenas are carnivorous, often eating another animal's kill rather than catching their own prey. Hyenas also hunt in packs. Hyenas will fight with each other over food sources. Hyenas will hide extra food in watering holes. They eat every part of the animal, including hooves and bones. Aardwolves are insectivores, feeding only on termites.

Hyenas are incredibly intelligent animals. They are nocturnal, active at night.

Hyenas communicate with various postures, sounds and signals. They are well known for their cackling laugh-like screams. It is believed hyenas use this laughter to alert other hyenas of food sources. Hyenas can hear this call up to three miles away. The pitch and tone of a hyena’s laugh can indicate its social status and age.

The hyena has exceptionally strong jaws in relation to its body size. The female spotted hyena is more dominant and larger than the male hyena. Female spotted hyenas always rank higher than males in the clan. Brown hyenas, striped hyenas and aardwolves have male-dominated clans.

Most hyenas form packs, communities of up to 80 members. The hyena den is the center of their pack territory. Hyena packs hunt for food as a group. Aardwolves, however, are solitary hyenas and usually only gather during the mating season.

Mothers in a clan share the responsibility of nursing each others' babies. Clan members bring food to the den for the cubs. Gestation lasts for 90 to 110 days, with 2 to 4 cubs being born. The mother raises her babies in a natal den, a special place reserved only for mothers and babies. Cubs battle to establish dominance and to win over the best feeding positions because female hyenas have only two nipples. Fights between cubs can sometimes be fatal. Weaker and smaller cubs can die of starvation. Mother hyenas milk their cubs for 12 to 18 months. Cubs begin to also eat meat in about 5 months.

Hyenas have no natural predators. They live up to 21 years in the wild.

Hyenas are threatened by habit loss caused by animal agriculture. They are often killed by ranchers. Populations of hyenas are declining due to poaching, loss of habitat and food sources and persecution by humans. Hyenas have also been hunted for traditional medicine ingredients. The brown hyena is in danger of extinction. The striped hyena is threatened.