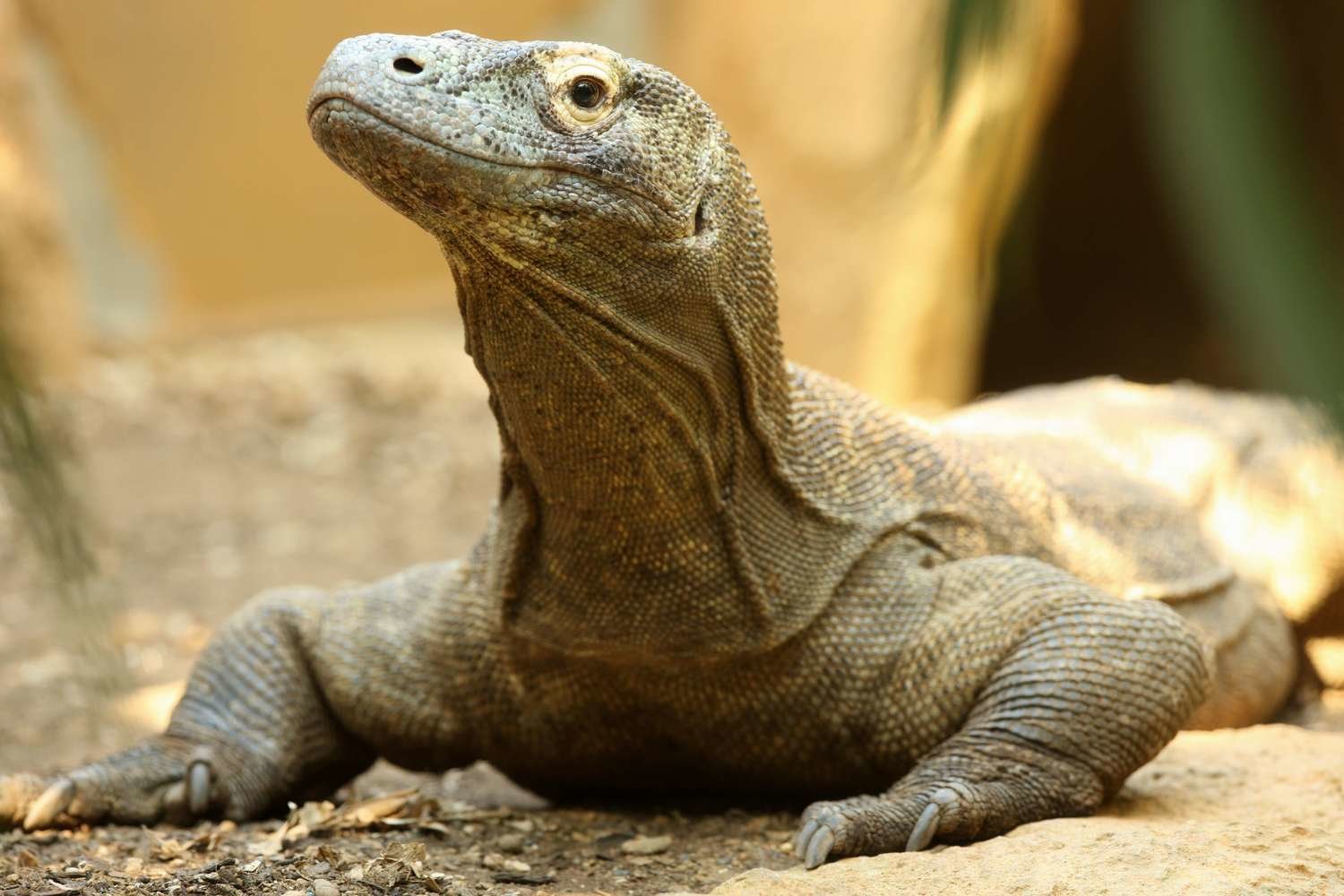 Your Adopt A Komodo Dragon Kit comes in a Deluxe Folder and includes:

Adopt A Komodo Dragon Kits make great gifts and can be sent directly to the recipient. Simply supply the recipient's name and mailing address as shipping information. We'll even include a letter stating the Adopt An Animal Kit is from you.

Komodo dragons are monitors, any of various dragonlike, mostly tropical lizards. A monitor lizard has a heavy body, long head and neck, long tail that comes to a whiplike end, and strong legs with sharp claws. Its slender, forked tongue is protrusible. Monitors range in size from the 8 inch short-tailed species of West Australia to 10 feet, 300 lb.

Some monitor species spend their lives in trees, and others inhabit lakes and rivers; they can be found on the oceanic islands and continents of the Eastern Hemisphere in all types of warm habitats, from tropical forest to desert. Komodo dragons, the giant among living lizards, live on the small Indonesian island of Komodo.

Monitors feed on various kinds of animal matter, including eggs, rats, frogs, and decaying meat. The larger species will attack small deer and pigs. They often tear the prey with claws and teeth, but generally swallow it whole or in large chunks. Monitors lay from 7 to 35 leathery eggs, usually in holes in the ground or in trees.

Reptiles are of the order Squamata, which also includes the snake. Lizards form the suborder Sauria, and there are over 3,000 lizard species distributed throughout the world (except for the polar regions), with the greatest number found in warm climates. Lizards typically have four legs with five toes on each foot, although a few, such as the worm lizard and the so-called glass snake, are limbless, retaining only internal vestiges of legs. Lizards are also distinguished from snakes by having ear openings, movable eyelids, and less flexible jaws. As in snakes, there is a chemosensory organ opening in the roof of the mouth. The tongue, which may be short and wide, slender and forked, or highly extendible, conveys particles from the environment to this organ. The skin of the lizard is scaly and in most species is molted in irregular patches. Members of several lizard families, notably the chameleons, undergo color changes under the influence of environmental and emotional stimuli.

Many lizards are arboreal, and many terrestrial species are well adapted for climbing. They are often fast runners, some achieving speeds of over 15 mph. Some are adapted for burrowing. Most can swim and a few lead a semiaquatic existence, among them the single marine species, an iguana of the Galapagos Islands. Gliding forms, the flying dragons, are found in the forests of South East Asia. The gila monster and the related beaded lizard of the North American deserts are the only known poisonous lizards; despite folklore, the bite of the gecko is not poisonous. Members of most species are carnivorous, feeding especially on insects, but some are herbivorous or omnivorous.

The Komodo dragon is the largest living lizard in the world, growing to an average length of 10 feet. In the wild large adults tend to weigh around 154 pounds. Captive specimens often weigh more. The largest verified specimen was 10 feet 3 inches long and weighed 365 pounds, including undigested food. The Papua monitor, Varanus salvadorii, may surpass the Komodo in length but it is slimmer and weighs less.

Fertilization is internal in lizards; males have paired copulatory organs, characteristic of the order. In most species females lay eggs, which they bury in the ground, but in some the eggs are incubated in the oviducts and hatched as they are laid. In both types the young have a special temporary tooth for rupturing the shell. In a few species there is true viviparity, or live birth, with the young nourished by a simple placenta.

Mating for Komodo dragons occurs between May and August, with the eggs laid in September. The female lays her eggs in the ground or in tree hollows, lending them some protection. Clutches usually contain an average of 20 eggs, and have an incubation period of 7 months. However, after the hatchlings are born, they are generally defenseless and many do not survive. Young Komodo dragons generally spend their first few years living in trees where they have a greater chance of survival. Komodo dragons take around five years to mature.

Sightings of the Komodo dragon were first reported to Europeans in 1910. Widespread knowledge came after 1912, in which Peter Ouwens, the director of the Zoological Museum at Bogor, Java, published a paper on the topic. In 1980 the Komodo National Park was founded to help protect their population.

Komodo dragons are carnivorous. Although they seem to like carrion, studies show that they also hunt live prey with a stealthy approach followed by a sudden short charge, during which they can run briefly at speeds up to 13 mph. Komodo dragons have not traditionally been considered venomous, but the serrations along their teeth are an ideal niche for over 50 strains of bacteria. If the initial bite does not kill the prey, and it escapes, the deadly infections caused by the bacteria living in the dragon's teeth kill the prey within a week. Then the Komodo dragon descends upon its victim, tracking by smell to feed upon its dead flesh. The dragon also has large claws that are used when they are younger to climb trees, but when they are older these are used mainly as weapons.

The Komodo dragon's prey is wide ranging, and includes wild pigs, goats, deer, and water buffaloes. In the wild they have also been observed to eat other smaller dragons. Occasionally they have been known to eat humans and human corpses. Over a dozen human deaths have been attributed to dragon bites in the last century, though there are reports of survivors of the resulting septicemia. Not many live to tell their story of how they escaped the Komodo dragon.

The Komodo dragon is a vulnerable species and is on the IUCN Red List. There are approximately 4,000 to 5,000 living Komodo dragons in the wild. Their populations are restricted to the islands of Gili Motang (100), Gili Dasami (100), Rinca (1,300), Komodo (1,700), and Flores (perhaps 2,000). However, there are concerns that there may presently be only 350 breeding females. To address these concerns, the Komodo National Park was founded in 1980 to protect Komodo dragon populations on islands including Komodo, Rinca, and Padar. Later, the Wae Wuul and Wolo Tado Reserves were opened on Flores to aid with Komodo dragon conservation.

Volcanic activity, earthquakes, loss of habitat, fire, loss of prey due to poaching, tourism and illegal poaching of the dragons themselves have all contributed to the vulnerable status of the Komodo dragon. Under Appendix I of CITES (the Convention on International Trade in Endangered Species), commercial trade of skins or specimens is illegal.
Save this product for later
Display prices in: USD