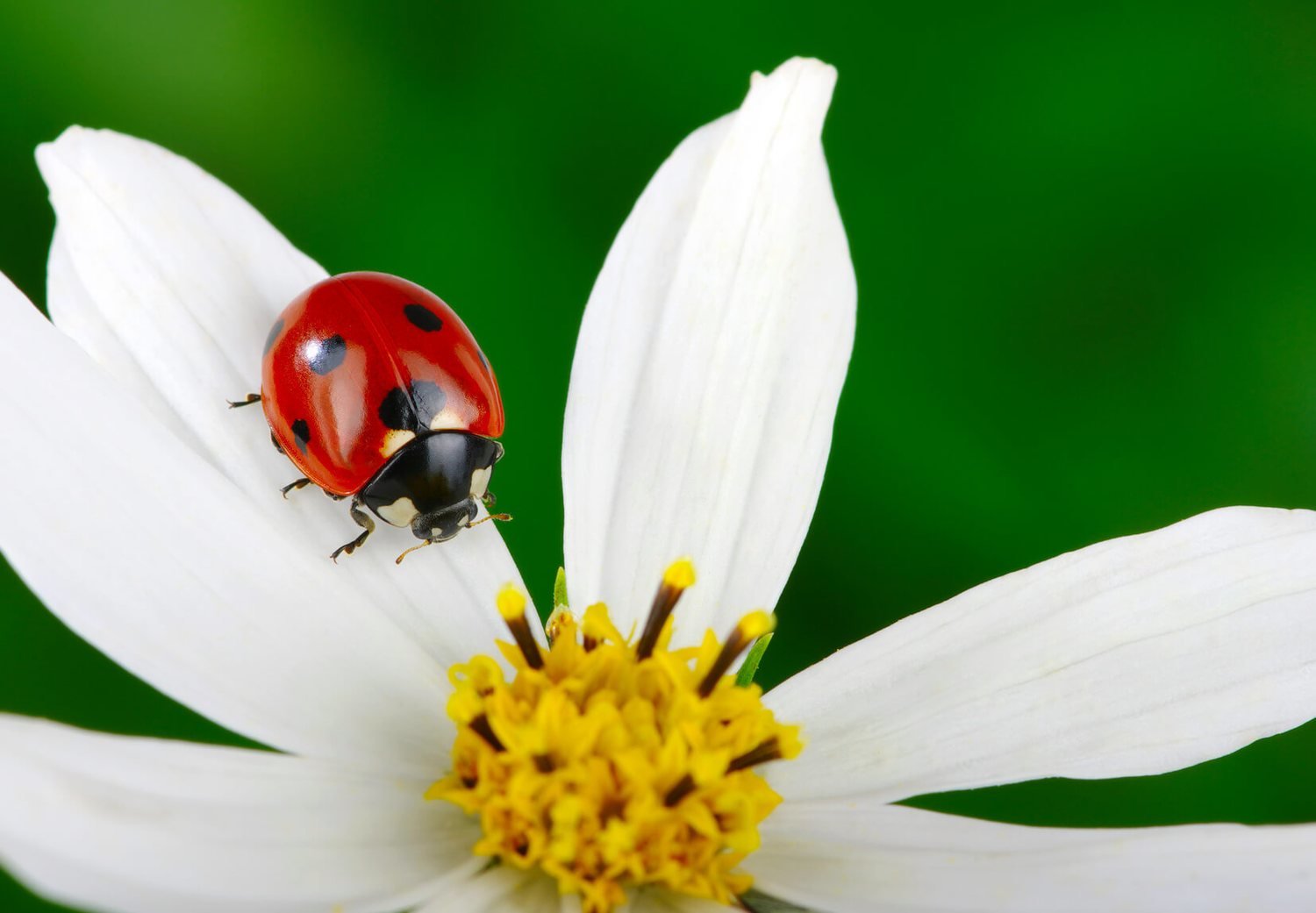 Your World Animal Foundation Adopt A Ladybug Kit comes in a Deluxe WAF Folder and includes:

Adopt A Ladybug Kits make great gifts and can be sent directly to the recipient. Simply supply the recipient's name and mailing address as shipping information. We'll even include a letter stating the Adopt An Animal Kit is from you.

The Coccinellidae are a family of small beetles, commonly known as ladybugs in North America and ladybirds in Britain, Ireland, the Commonwealth and some parts of the southern United States. Entomologists in the United States prefer the names ladybird beetles or lady beetles, as these insects are not true bugs.

Coccinellids are found worldwide, with over 5,000 known species. They are often yellow, orange, or scarlet with small black spots on their wing covers, with black legs, heads and antennae. Color patterns vary greatly, however. Depending on the species, they can have spots, stripes, or no markings at all. Many species are mostly, or entirely, black, dark gray, gray, or brown. Seven-spotted coccinellids are red or orange with three spots on each side and one in the middle; they have a black head with white patches on each side. Most coccinellids have oval, dome-shaped bodies with six short legs.

The four most common types of ladybugs are:

The round-shaped ladybugs, Seven-spotted ladybug, originally from Europe. They are round and have a dome-shape, and are bright red with seven spots of black on the back of their bright red wings.

The oval-shaped ladybug, Convergent ladybug, which is orange with different spot patterns of black. They are common in the pacific coastal states.

The Multicolored Asian ladybeetle, a larger ladybug with five black spots and curved lines in the shape of the letter M. These ladybugs are originally from Asia and are now plentiful in the United States.

The C-Mac ladybug, an oblong pink and black spotted ladybug.

Ladybugs are generally considered useful insects, because many species feed on aphids or scale insects which are pests in gardens, agricultural fields, orchards and similar places. Within the colonies of such plant-eating pests, they will lay hundreds of eggs. When these hatch the larvae will commence feeding immediately. However, some species do have unwelcome effects; among these the most prominent are the subfamily Epilachninae, which are plant eaters. Usually, Epilachninae are only mild agricultural pests, eating the leaves of grain, potatoes, beans, and various other crops. But their numbers can increase explosively in years when their natural enemies, such as parasitoid wasps that attack their eggs, are few. In such situations, they can do major crop damage. They occur in practically all the major crop-producing regions of temperate and tropical countries.

Coccinellids are best known as predators of aphids and scale insects, but the range of prey species that various ladybugs attack is much wider. Some specialize in mites, some attack caterpillars and other beetle larvae. Others feed on various insects or their eggs. Larvae and eggs of ladybirds, either their own or of other species, can also be important food resources when alternative prey are scarce. Certain species of coccinellids are thought to lay extra infertile eggs with the fertile eggs, apparently to provide a backup food source for the larvae when they hatch. The ratio of infertile to fertile eggs increases with scarcity of food at the time of egg laying. Ladybugs are also now known to be far more omnivorous than previously thought. Their diets often include honeydew, pollen, plant sap, nectar, and various fungi. Some species are strictly herbivores.

The main predators of ladybugs are usually birds, but they are also the prey of frogs, wasps, spiders, and dragonflies. The bright colors of many ladybugs discourage some potential predators from making a meal of them. Their coloring is a reminder to any animals that have tried to eat their kind before that they taste awful. The blood of a ladybug is yellow and has a very strong smell that also acts as a repellent to predators. Ladybugs also play dead until predators pass.

Ladybugs in temperate regions enter diapause (a period of suspended development) during the winter, so they often are among the first insects to appear in the spring. Some species gather into groups and move to higher elevations, such as a mountain, to enter diapause. Most coccinellids overwinter as adults, aggregating on the south sides of large objects such as trees or houses during the winter months, dispersing in response to increasing day length in the spring.

Ladybugs go through a complete metamorphosis with egg, larval, pupal, and adult stages. Ladybug eggs look like small clusters of orange footballs. Female ladybugs can lay more than 2,000 eggs in one year. The eggs hatch in only a few days. Eggs are usually laid on leaves near an area where the larvae have easy access to food sources.

Baby ladybugs, larvae, look nothing like adults. They are long in shape and are generally one color, resembling small alligators. They are fast moving and they have big appetites. The larvae will eat aphids and other bugs for about 2 to 3 weeks. After they have grown to full size, they attach themselves to a plant leaf or a stem by their tail and begin a metamorphosis. Their skin splits down its back and exposes the pupa, which is about the same size and color as adults but with a protective layer until they develop wings. They pupate and turn into an adult ladybug within 7 to 10 days.

Ladybugs usually do most of their flying in the warmest part of the afternoon. They beat their wings 85 times per second. Their wings are made from chitlin, the same material human fingernails are made from.

As ladybugs grow older, their spots fade. Most ladybugs live for about a year, but some species can live up to three years. In a year they eat over 5,000 bugs, playing a vital role in the management of pests.

Due to habitat loss and changes in climate, ladybugs are threatened with extinction. Ladybugs are particularly sensitive to temperature changes, and will die from dehydration if they become overheated. Like most animals, the primary threat to ladybugs is the destruction of their habitat. Human development has taken an alarming toll on the environment. Impact from land use practices such as agricultural conversion, deforestation, and urban sprawl continue to degrade and fragment remaining pockets of habitat and accelerate biodiversity loss. Pesticides and other forms of pollution are also of serious concern, as well as genetically modified organisms (GMOs).