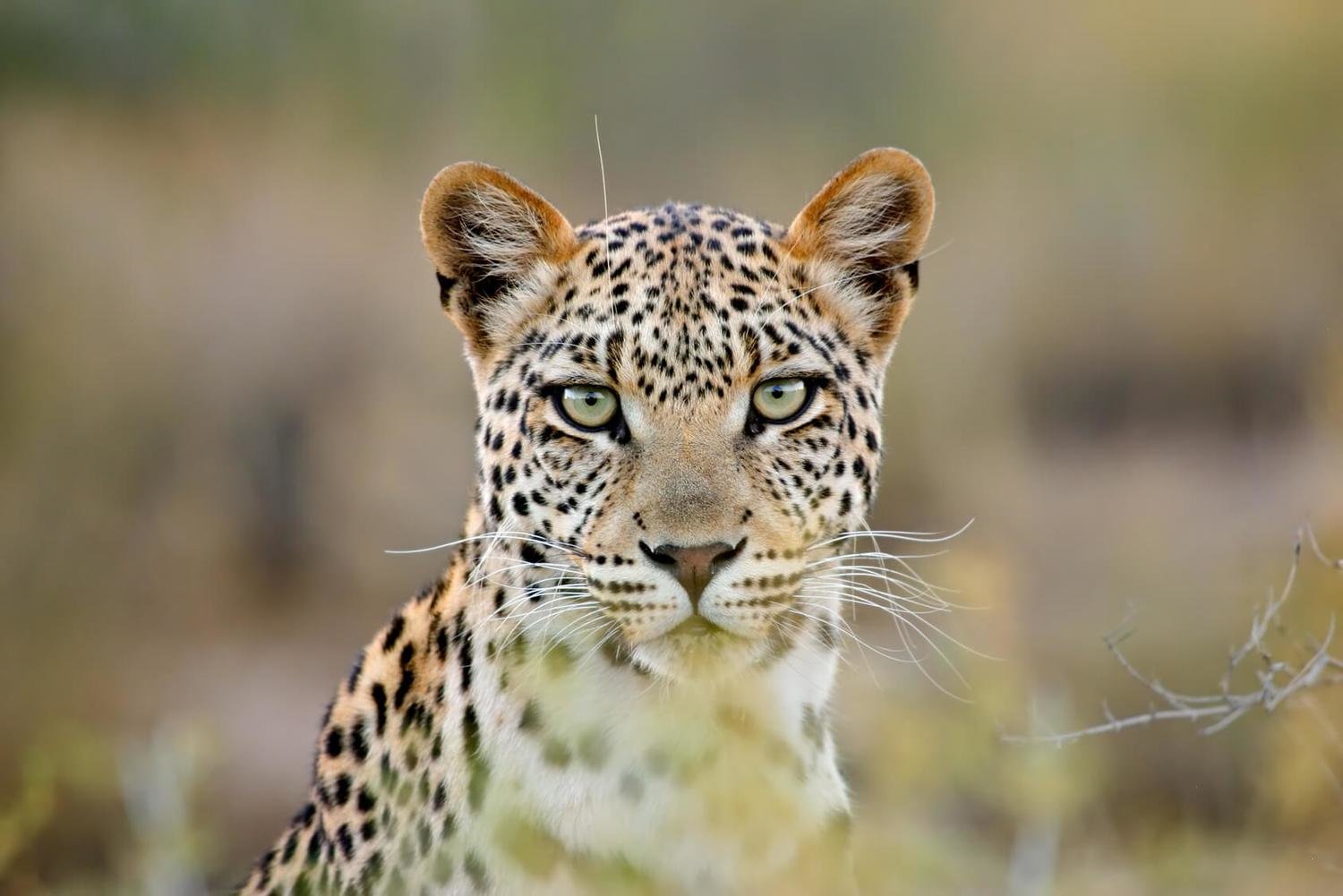 Your Adopt A Leopard Kit comes in a Deluxe Folder and includes:

Adopt A Leopard Kits make great gifts and can be sent directly to the recipient. Simply supply the recipient's name and mailing address as shipping information. We'll even include a letter stating the Adopt An Animal Kit is from you.

Leopards are medium-sized cats found in a range of colors from pale yellow to gray to chestnut. A leopard’s shoulders, upper arms, back and haunches are marked with dark spots in a rosette pattern, while the head, chest and throat are marked with small black spots. Large black spots cover the leopard’s white belly. Black, or melanistic, leopards are common, especially in dense forests.

Leopards are 1.5 to 2.6 feet tall at the shoulder. They are three to six feet long, with a tail that is two to 3.5 feet long. Males weigh between 82 and 200 pounds, females are slightly smaller. Leopards live for up to 20 years.

Leopards are found throughout most of Africa and Asia from the middle east to the Soviet Union, Korea, China, India, and Malaysia. They live in a variety of habitats including forests, mountains, grassland and deserts. Leopards eat small hoofstock such as gazelle, impala, deer and wildebeast. On occasion, they may also hunt monkeys, rodents and birds.

Leopards are nocturnal animals, meaning they are active at night. During the day, they rest in thick brush or in trees. Leopards are solitary, preferring to live alone. They are very agile and good swimmers. They are able to leap more than 20 feet.

Following a 90 to 105 day gestation, one to six kittens are born. The average litter size is two or three. Kittens weigh about one pound when they are born. They will stay with their mother for 18 to 24 months.

The big cats, especially the spotted cats, are easy to confuse for those who see them in captivity or in photographs. The leopard is closely related to, and appears very similar to, the jaguar; it is less often confused with the cheetah. The ranges, habitats, and activities of the three cats make them easy to distinguish in the wild.

Since wild leopards live only in Africa and Asia, while wild jaguars live only in the Americas, there is no possibility of confusing them in the wild. There are also visual markings that set them apart. Leopards do not have the spots within the rosettes that jaguars always have, and the jaguar's spots are larger than the leopard's. The Amur leopard and the North Chinese leopard are occasional exceptions. The leopard is smaller and less stocky than the jaguar, although it is more heavyset than the cheetah.

Besides appearance, the leopard and jaguar have similar behavior patterns. Jaguars can adapt to a range of habitats from rainforest to ranchlands, while leopards are even more adaptable ranging in from deserts and mountains, savanna and woodlands.

The cheetah, although its range overlaps extensively with that of the leopard, is easily distinguished. The leopard is heavier, stockier, and has a larger head in proportion to the body. The cheetah tends to run rather fast and goes much more quickly than the leopard. The cheetah also has dark 'teardrop' like markings running down the sides of its face, whereas the leopard does not. Cheetahs are usually diurnal, while leopards are more active at night (nocturnal); cheetahs are also exclusively terrestrial (except when young), while leopards often climb trees.

Prior to the human induced changes of the last few hundred years, leopards were the most widely distributed of all felids other than the domestic cat: they were found through most of Africa (with the exception of the Sahara Desert), as well as parts of Asia Minor. They are still found in the Middle East, India, Pakistan, China, Siberia, much of mainland South East Asia, and the islands of Java and Sri Lanka.

The leopard is doing surprisingly well for a large predator. It is estimated that there are as many as 500,000 leopards worldwide. But like many other big cats, leopards are increasingly under threat of habitat loss and are facing increased hunting pressure. Because of their stealthy habits and camouflage, they can go undetected even in close proximity to human settlements. Despite the leopard's abilities, it is no match for habitat destruction and poachers, and several subspecies are endangered, namely, the Amur, Anatolian, Barbary, North Chinese, and South Arabian leopards.

Leopards have long been victims of the animal entertainment industry; forced to perform in circus acts or sentenced to a life in captivity for human entertainment. Animals used in the circus spend the majority of the year imprisoned in small cages or on chains, traveling from show to show. The training endured by circus animals is almost always based on intimidation; trainers must break the spirit of the animals in order to control them. Zoos are designed with the needs and desires of the visitors in mind, not the needs of the animals. Many animals in zoos exhibit abnormal behavior as a result of being deprived of their natural environments and social structures. Most animals in zoos were either captured from the wild or bred in captivity for the purpose of public display, not species protection.