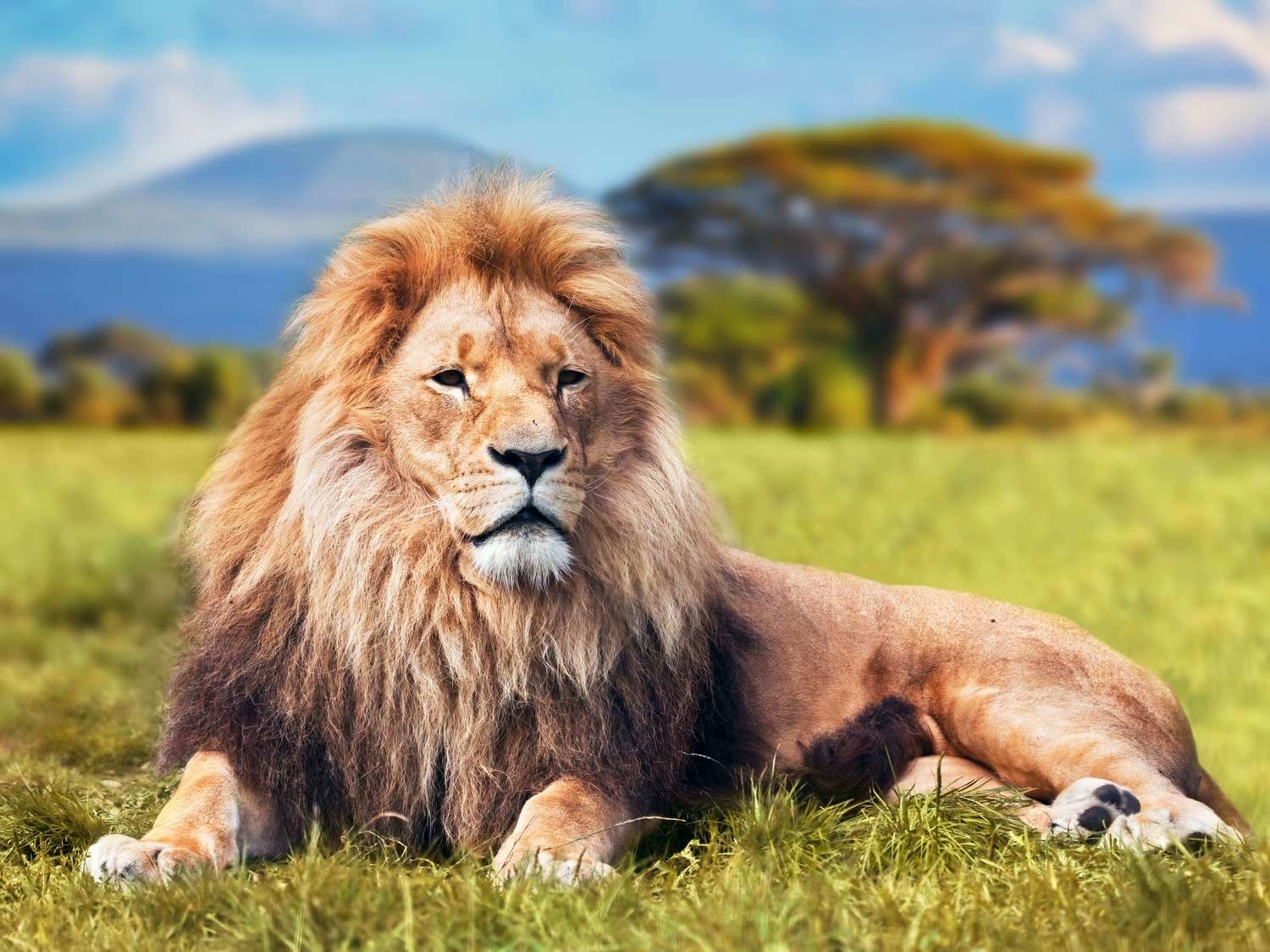 Your Adopt A Lion Kit comes in a Deluxe Folder and includes:

Adopt A Lion Kits make great gifts and can be sent directly to the recipient. Simply supply the recipient's name and mailing address as shipping information. We'll even include a letter stating the Adopt An Animal Kit is from you.

Renowned for their majesty and nicknamed the King of the Jungle, lions possess both beauty and strength. Males are distinguishable by their manes which protect them while fighting.

Lions vary in color but are typically a light, yellowish-brown. Males stand at a shoulder height of about 4 feet and reach about 5 ½ to 8 feet in length. Their tails average a length of 3 to 3 ½ feet, and they can weigh as much as 330 to 550 pounds. Females are smaller than males.

Lions are the only members of the cat family to display obvious sexual dimorphism – that is, males and females look distinctly different.

The lion is found throughout the south Sahara desert and in parts of southern and eastern Africa. Since the early 1950s, the lion population in Africa has been reduced by half. Today fewer than 21,000 remain in all of Africa. Lions live an average of 15 years in the wild, 24 years in captivity.

The African lion inhabits grassy plains, savannahs, open woodlands and scrub country. Lions feed upon a wide array of animals, including wildebeest, impala, zebra, giraffe, buffalo and wild hogs. They will also feed on smaller animals such as hares, birds and reptiles.

The only social member of the cat (Felidae) family, lions live in large groups called "prides," consisting of about 15 lions. Related females and their young make up the majority of the pride. A single male, or sometimes a small group of two to three males, will join a pride for an indefinite period, usually about three years or until another group of males takes over. Females do almost all of the hunting. They are mainly nocturnal and work in teams to stalk and ambush prey.

Lions communicate with an array of facial expressions, body postures and vocalizations. Variations in intensity and pitch, rather than discrete signals, appear central to communication. Lion vocalizations include snarling, hissing, coughing, meowing, woofing and roaring. Lions most often roar at night to advertise the animal's presence. They have the loudest roar of any big cat.

A lion can run for short distances at 50 miles per hour and leap as far as 36 feet. They are also territorial. Males roar and use scent markings to establish their domain.

A female gives birth to litters averaging three to four cubs. If the entire litter dies, she will mate again within a few days. They begin hunting at 11 months and remain with their mother for at least two years.

Lion populations are rapidly decreasing, with an estimated 30–50% decline per 20 years in the late half of the 20th century. Habitat loss and conflicts with humans are considered the most significant threats to the species. The remaining populations are often geographically isolated from one another, which can lead to inbreeding, and consequently, reduced genetic diversity.

Lions are often victims of captivity for human entertainment. Even under the best of circumstances, captivity is cruel for lions. Confined to tiny cages and gawked at by crowds, animals in exhibits and acts endure constant stress. They may suffer from temperature extremes and irregular feeding and watering. Without exercise, they become listless, their immune systems are weakened, and they become prone to sickness; many resort to self-mutilation in reaction to stress or boredom. Mental illness is rampant among confined animals. Torn from their families and deprived of all dignity, every part of their lives is controlled by their captors.

Forced to perform in circus acts, lions used in the circus spend the majority of the year imprisoned in small cages or on chains, traveling from show to show. The training endured by circus animals is almost always based on intimidation; trainers must break the spirit of the animals in order to control them. Zoos are designed with the needs and desires of the visitors in mind, not the needs of the animals. Many animals in zoos exhibit abnormal behavior as a result of being deprived of their natural environments and social structures. Most animals in zoos were either captured from the wild or bred in captivity for the purpose of public display, not species protection.