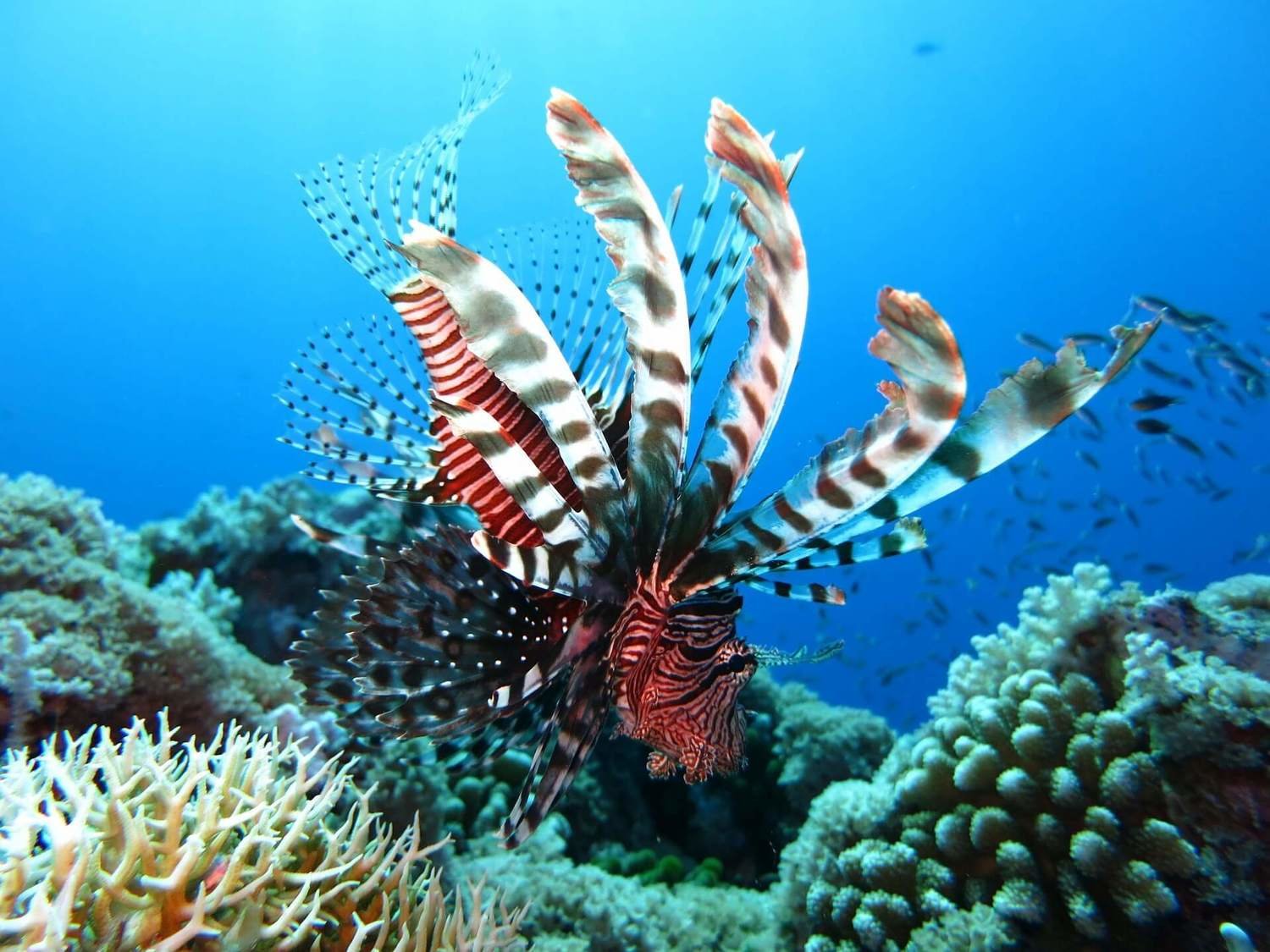 Your Adopt A Lionfish Kit comes in a Deluxe Folder and includes:

Adopt A Lionfish Kits make great gifts and can be sent directly to the recipient. Simply supply the recipient's name and mailing address as shipping information. We'll even include a letter stating the Adopt An Animal Kit is from you.

Lionfish (also called turkeyfish, dragonfish, tigerfish, butterfly cod and scorpionfish) are venomous spiky fish that inhabit warm waters of the western and central Pacific Ocean. Lionfish are predatory fish, hunting small fish. Their venom is used for self-defense and can kill large animals. Lionfish are known for their beautiful colored bodies, covered with zebra-like stripes of red, orange, white, brown or black color, depending on the species.

The range of the lionfish covers a very large area from western Australia and Malaysia east to French Polynesia and the United Kingdom's Pitcairn Islands, north to southern Japan and southern Korea and south to Lord Howe Island off the east coast of Australia and the Kermadec Islands of New Zealand. In between, the species is found throughout Micronesia.

Lionfish prey on a large variety of small fish and crustaceans. Lionfish are active hunters who ambush their prey by using their outstretched, fan-like pectoral fins to slowly pursue and corner them. The large mouths of lionfish allows them to swallow prey whole. The stomachs of lionfish have the ability to expand up to 30 times their size, allowing lionfish to eat animals larger than themselves. When food sources are scarce, lionfish will even eat other lionfish.

Lionfish have teeth. They are small and are located not only on the upper and lower jaws, but also in a small patch on the roof of their mouths. Their extra teeth aid in grasping prey caught by quick predatory strikes.

A female lionfish can releases up to two million eggs each year – or about 10,000 to 30,000 eggs every four days. The eggs are then fertilized by male lionfish. Lionfish couples hide after mating so their eggs can float away before being seen by predators that eat lionfish eggs. Lionfish eggs hatch in 2 days. A baby lionfish is very small and is called a fry. Baby lionfish remain near the surface of the water until they grow larger. When they are about an inch long they join the reef community. Lionfish reach adult size when they are about 2 years old.

Lionfish have few predators due to their large size and intimidating appearance. Spikes protruding from lionfish contain venom. Lionfish have over 19 spines, 13 along the backside of their bodies. Their spines are not used to hunt; only self-defense.

Lionfish live up to 15 years in the wild.

Lionfish are not currently listed as threatened or endangered in their native range. However, the increase in pollution in coral reefs may negatively affect the lionfish's primary food sources (crustaceans and fish). If lionfish are unable to adapt to declines in their prey species, their numbers may decrease.

Lionfish are victims of the pet trade. The lionfish is a very popular aquarium fish, condemned to a life in a small tank for the amusement of humans.

Lionfish are also an invasive species due to the pet industry, flourishing unnaturally in U.S. Southeast and Caribbean coastal waters. This invasive species has the potential to harm reef ecosystems because it is a top predator that competes for food and space with overfished native animals. Scientists fear that lionfish will also kill off helpful species such as algae-eating parrotfish, allowing seaweed to overtake the reefs.