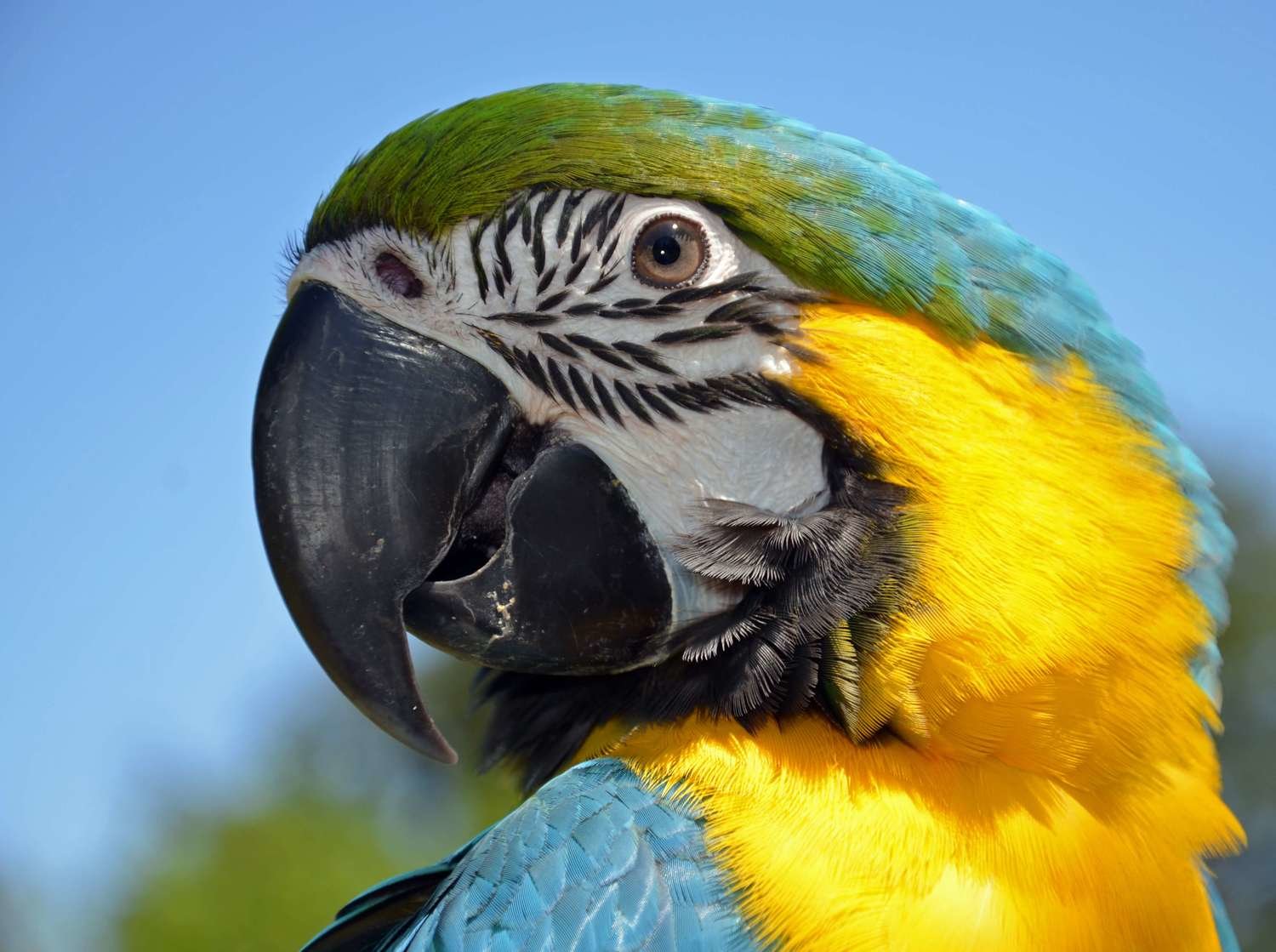 Your Adopt A Macaw Kit comes in a Deluxe Folder and includes:

Adopt A Macaw Kits make great gifts and can be sent directly to the recipient. Simply supply the recipient's name and mailing address as shipping information. We'll even include a letter stating the Adopt An Animal Kit is from you.

Colorful denizens of the trees, macaws are some of the most beautiful and charismatic birds on earth. Part of the parrot family Psittacidae, macaws in particular are New World creatures, native to South America, Central America and Mexico. There are 19 recorded species of macaw, including endangered or extinct ones; while most are found in rainforest habitats, where their bright plumage fits in with other colorful flowers, fruits and plants. Other species also exist in woodland or drier savannah-type regions.

The two main trademarks of a macaw, its large, curved beak and long tail, and a lighter colored facial patch (which varies in size between species), is what separates macaws from other types of parrots. Interestingly, each bird’s feather facial patterns are completely unique, much like fingerprints in humans. Most species are generally large birds, and they can range in size from 11.5 to 39.5 inches, and in weight from 4.5oz to 3.75 lb. The largest, the hyacinth macaw, has a wingspan of more than four feet! They’re also some of the most long-lived birds - many species of macaw can live from between 40-60 years of age in the wild, and larger macaws have survived up to age 75 in captivity.

In addition to their vibrant coloring, these birds have many other adaptations suited to tree dwelling. Strong feet with long, gripping toes that alternately face backward and forward (called zygodactyl) are used by the macaw to perch securely on branches, move from place to place, and grab and hold objects. Their powerful beaks allow them to easily crack open seeds and nuts, while their highly manoeuvrable, scaly tongue contains a bone that they use as a tool to manipulate food and tap into fruit.

As a rule, macaws are highly intelligent and social avians. They gather in canopy flocks that range from 10 to 30 birds, and their raucous voices - used in a language of squawks, screams and calls - are used to communicate with other birds, distinguish and identify each other, and mark territory. Macaws are also great mimics, and in captivity, some species easily learn how to imitate human speech and other sounds. Flocks sleep together in the trees overnight for security.

Like many other birds, omnivorous macaws will eat a wide variety of different foods that can include nuts, snails, fruit, seeds, leaves, palm fruit, flowers and stems. Some species travel long distances to forage, covering over 62 miles in some cases depending on the season and availability. They may even eat foods that contain toxic substances, which they seem to be able to digest. The practice of clay eating is also exclusive to macaw species in the Amazon Basin; with the exception of rainy days, these macaws visit exposed river banks daily to consume clay for its sodium content, since sodium is scarce in these species’ food sources. The clay is also thought to be a natural source of cobalamin (vitamin B12), and parent macaws in the western Amazon will feed their nestlings high amounts of clay after hatching.

Reproduction is a serious business for these birds. Reaching sexual maturity anywhere between 3 and 5 years, mated macaws are monogamous partners for life, raising their young together. Mated macaws will often lick and groom each other to display and enhance their bond together. Breeding typically happens every 1-2 years, and can happen in any season in the wild. Females lay between 1 to 4 eggs in the hollows of trees, usually located in the upper rainforest canopy, and do most of the work of incubation while the male brings them food in the nest. After hatching, the male also is the main provider for the nestlings, feeding them liquefied, regurgitated food until they’re able to eat on their own. Because they reach maturity far later than many other bird species, nestlings often stay with the parents for up to two years, and the male and female will not lay another set of eggs until the previous young are fully independent.

As adults, many macaws are able to escape predation by flying away and hiding in the canopy, but hatchlings, immature birds, and occasionally fully fledged macaws can be vulnerable to predators like snakes, monkeys, eagles, hawks and large cats. As bright as they are, adult macaws try to camouflage their nests as best as possible and are extremely vigilant when protecting their young.

Most species of macaws existing today are unfortunately endangered, some critically so. The two greatest threats to populations of macaws in the wild are the continuing deforestation of their natural habitats, which significantly reduces available nesting sites, and illegal capture of birds for the pet trade, in spite of regulated international trade laws. Some birds are also hunted locally for their meat and bright feathers, which are sold for decoration in handmade products or costuming. Blue and gold macaws tend to be the most numerous macaw species in captivity, with many hybrid variations of blue and gold and other macaw species becoming more popular in the commercial pet market. The destruction of their rainforest habitat is particularly concerning, in light of the fact that macaws don’t reproduce frequently or in large numbers, and it’s likely the largest reason why many species of these beautiful birds teeter on the brink of extinction in the wild.