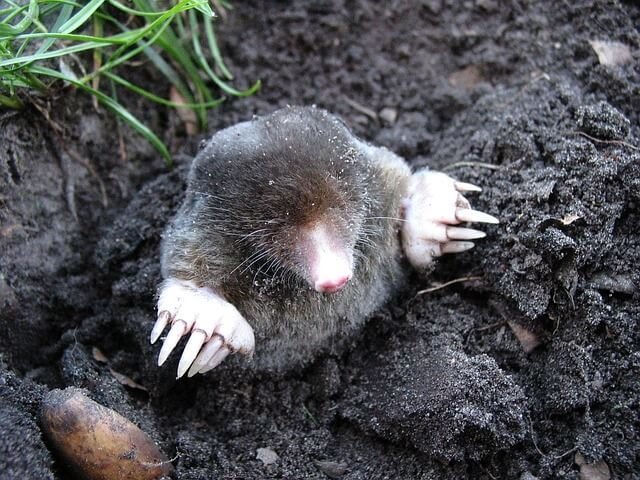 Your Adopt A Mole Kit comes in a Deluxe Folder and includes:

Adopt A Mole Kits make great gifts and can be sent directly to the recipient. Simply supply the recipient's name and mailing address as shipping information. We'll even include a letter stating the Adopt An Animal Kit is from you.

Mainly known for their pointy snouts and exceptional digging abilities, moles are small mammals that have adapted to living in self-dug tunnels underground. Belonging to the family Talpidae and native to many areas around the world including Europe, Asia, and North America, there are around 20 ‘true mole’ species of these small creatures. These persistent burrowers are found mainly in either grassland or woodland habitats, though some species are aquatic or semi-aquatic, choosing to construct burrows in the soft banks of ponds or streams instead. Regardless of habitat, most moles are also good swimmers too.

Although some literature presents moles as being approximately cat-sized, in reality, most species are actually much smaller. Most are typically around 15cm (6 inches) in length, though some species can be as short as 5cm (like the American Shrew mole) or as long as 20cm. A mole’s weight range, depending on species, can be anywhere from 10g to around 500g, which is still no more than 1.5lb at the very most. The average lifespan of a mole tends to be around 4 years of age, while some species have been noted to live up to age 6 or 7.

They may not be the fastest creatures overland, but the mole anatomy has truly evolved to marvelously suit their purpose; digging. Their spade-shaped, cylindrical bodies, short powerful front limbs and sharp claws are highly adapted for burrowing into soil and tunneling through it. An extra thumb on each forepaw (a trait that’s specific just to moles, and not their close relatives, shrews) also assists in pushing aside dirt and debris as the mole digs. Some moles can dig burrows up to 20 meters long in a single day. In addition to a highly efficient body structure, moles can also tolerate higher than normal levels of environmental carbon dioxide, so they’re able to survive easily in lower-oxygen environments like underground tunnels.

Moles also have soft, dense pelts, typically colored taupe or black, which allow them to move both backwards and forwards through snug underground holes. Mole eyes tend to be very small, and are sometimes covered by fur or skin, rendering them essentially blind. While this means that their visual perception is mainly limited to light and dark, they do have highly developed senses of hearing and smell. They also have sensitive Eimer’s organs at the end of their protruding snouts that are extremely receptive to touch and vibration.

While a mole’s omnivorous diet may not sound appealing to most humans, an earthworm is truly a mole’s favorite snack. They’ll also feast on other small insects and a variety of nuts, and some aquatic moles will also eat amphibians. A mole’s tunnels serve as their own personal food trap and banquet hall; moles can sense when a worm falls into the tunnel and will hurry to catch them. Interestingly, the star-nosed mole is so fast at catching and eating food that the process is impossible to follow with the human eye. They can make a meal disappear in under a second. While moles often eat right away, they’ll sometimes store earthworms for later consumption. Since their saliva contains a paralytic toxin, moles are able to stockpile still-living insects underground in self-constructed ‘larders’. Some mole hoards have been found to contain thousands of earthworms.

Most species of moles prefer a solitary existence aside from mating season, although the largest mole species, the desman, will often live in small groups of up to five animals. Males (called boars) are particularly territorial, and can fight fiercely if they encounter an intruding mole in their territory. These busy diggers generally mate in the spring sometime between February and May, with males searching for females (called sows) by tunnelling and loud squealing vocalizations to alert potential mates of their presence. After a gestation period lasting just over 1 month, the mole pups are born underground with litters ranging in size from 2 to 6 pups. It doesn’t take long before these young ones are ready to head out on their own. Mole pups leave their nest and their mother around 30 to 45 days after they’re born to find living space on their own.

As moles have poor vision and few defenses, they can be vulnerable to many kinds of predators. Foxes and coyotes are adept at detecting and digging moles out of their subterranean hiding places, and birds of prey such as vultures, hawks and owls find moles to be easy pickings when they’re above ground. A mole’s safest refuge is underground.

Since moles tend to burrow through lawns and fields, causing damage to grass and crop roots, many species are considered to be annoying agricultural nuisances in many countries, and trapping or control measures are used to deter moles from inhabiting these areas. Moles have also been historically hunted for their soft, pliable pelts, although the widespread population of most mole species means that this industry doesn’t pose a significant threat to moles at this time. A few mole species - the Canadian population of the Townsend’s mole and the Senkaku mole in Japan are two examples - are endangered, however, mostly due to the threat of human encroachment on their habitat and pest control measures taken against other species.