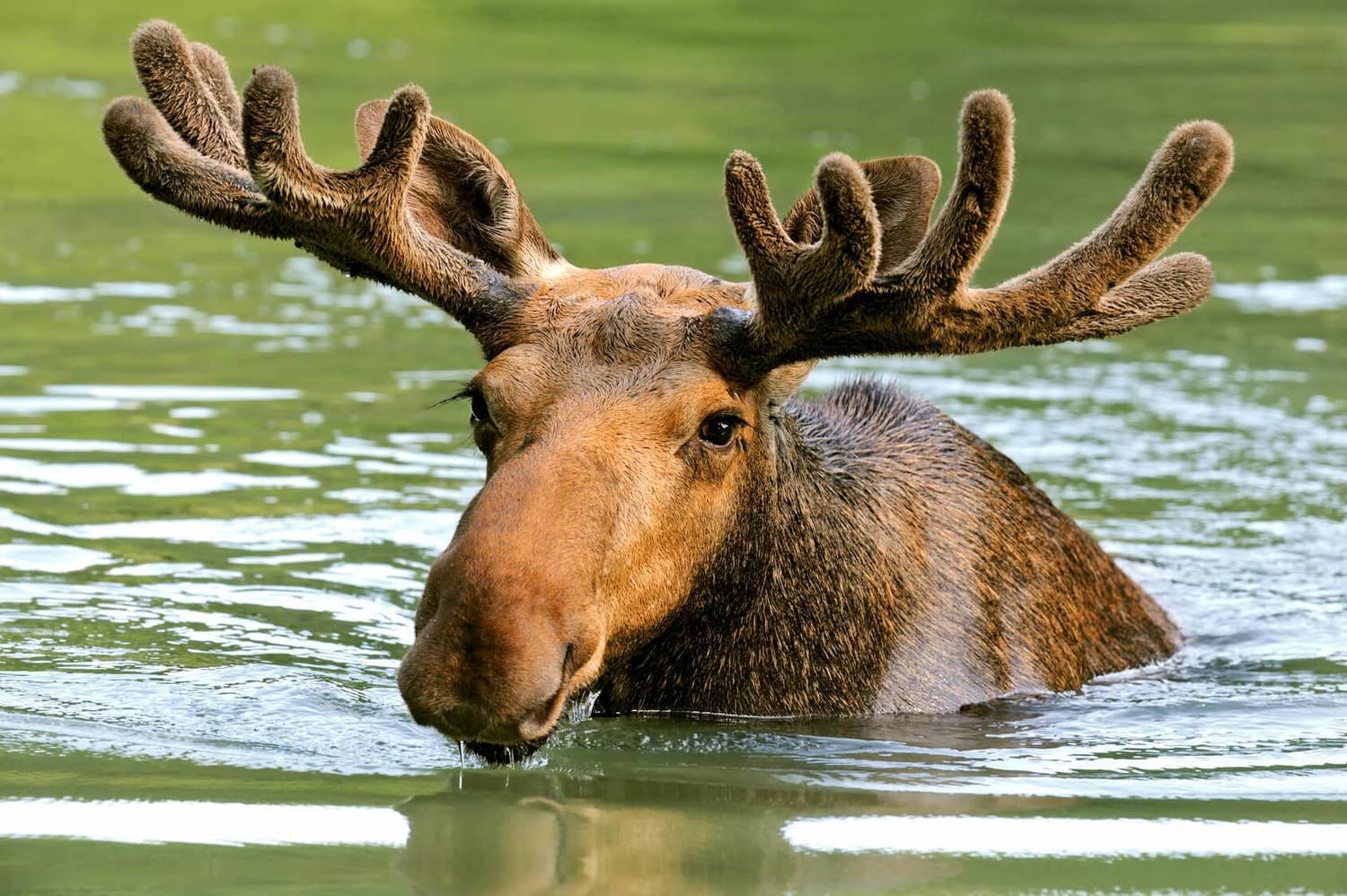 Your World Animal Foundation Adopt A Moose Kit comes in a Deluxe WAF Folder and includes:

Adopt A Moose Kits make great gifts and can be sent directly to the recipient. Simply supply the recipient's name and mailing address as shipping information. We'll even include a letter stating the Adopt An Animal Kit is from you.

Moose, the largest member of the deer family, are found in the northern parts of Eurasia and North America. The Eurasian species, A. alces, is known in Europe as the elk, a name which in North America is applied to another large deer, the wapiti. The Eurasian and the American moose are quite similar, but the American moose is somewhat larger and is considered by some to be a separate species, A. americana. It inhabits the coniferous forests of Canada and the northern United States. The Eurasian moose is found from Scandinavia to E Siberia.

Moose have a heavy brown body with humped shoulders, and long, lighter-colored legs; the front pair longer than the hind legs. They have a thick, overhanging, almost trunk like muzzle and a short neck. A flap of skin covered with long hair, the bell, hangs from their throats. Males have broad, extremely flattened antlers, with a spread of up to 6 feet. The largest variety is the Alaska moose; the adult male weighs from 1,000 to 1,800 pounds and stands as much as 71⁄2 feet high at the shoulder.

Browsers rather than grazers, moose eat leaves, twigs, buds, and the bark of some woody plants, as well as lichens, aquatic plants, and some of the taller herbaceous land plants. Moose live in small groups during the summer, sometimes forming large herds in the winter. They are polygamous, the males becoming aggressive during the mating season. They are strong swimmers, reportedly crossing lakes many miles wide.

Although moose are generally timid, the males become very bold during the autumn breeding season; it is not uncommon for them to charge at moving trains. The females utter a loud call, similar to the lowing of cattle. During breeding (the rut), males will compete for females by fighting with their antlers and hoofs and by fierce clashing of antlers. As well as bellowing, the female moose emits a strong, odoriferous pheromone in order to attract a mate.

Females may begin to breed at 2, but more usually, 3 years of age. The mother gives birth to one, or occasionally two, calves in spring. The gestation period for a moose is about 216 to 240 days. Moose calves grow very quickly, nourished by their mother's milk, which is very high in fat and other nutrients. Females can be extremely protective of their young.

In North America, during the winter, moose may form loose aggregations in fairly dense conifer forests, which they keep open by trampling the snow. In the spring, moose can often be seen in drainage ditches at the side of roads, taking advantage of road salt which has run off the road. These minerals replace electrolytes missing from their winter diet.

The lifespan of a moose in the wild is roughly 15 to 25 years.

In North America, changes in land use patterns, mainly the clearing of northern forests for settlement and agriculture, have led to the range of the white tailed deer expanding northward. Where their ranges overlap, moose may become infected by parasites carried by the deer such as brain worm, Parelaphostrongylus tenuis and winter ticks, Dermacentor albipictus, which, though fairly harmless to deer, can be fatal to moose.

Ticks are threatening moose populations. Thousands of ticks can infest a single moose, causing anemia and death. In an attempt to rid themselves of ticks, moose rub off patches of their fur, leaving them more vulnerable to cold winter temperatures. Changes in climate may also threaten moose.

Protection in national parks and reserves in Canada and the United States has saved the moose from extermination. However, hunting and habitat degradation remain major threats to moose. Moose once lived throughout most of the United States and Canada, but the species population dwindled from hunting and land development. Moose are known to visit residential areas in search of food, and motorists occasionally collide with them. Hundreds of moose calves are orphaned every year due to the death of their mothers.

Government mismanagement is another threat to moose. Wildlife management agencies, rather than working to preserve ecosystems, often manage wildlife purely for human recreation. Moose are viewed as a "resource" to be conserved simply for recreational purposes. Left unaltered, the delicate balance of ecosystems is maintained by nature with predators reducing the sickest and weakest individuals.