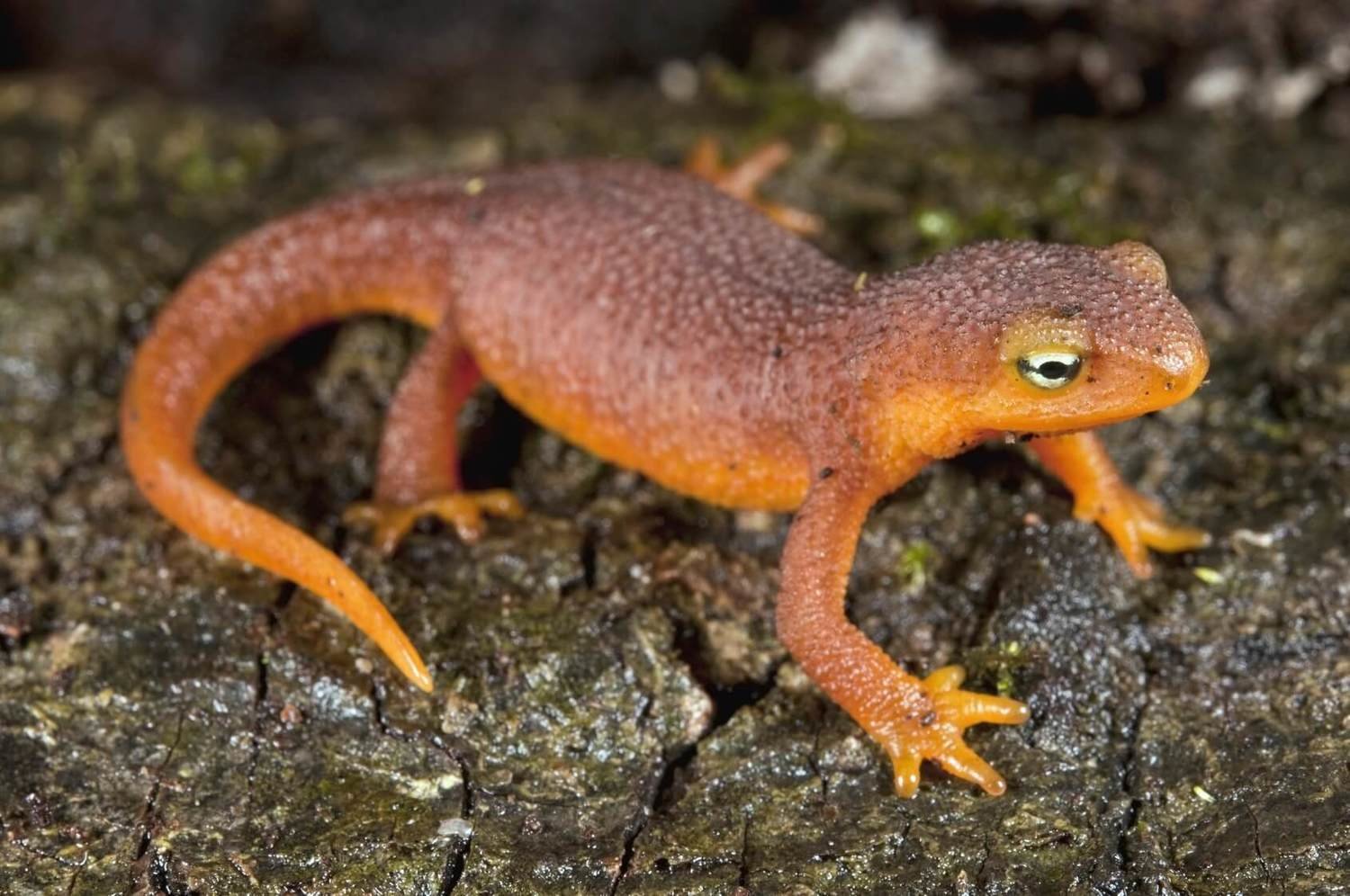 Your Adopt A Newt Kit comes in a Deluxe Folder and includes:

Adopt A Newt Kits make great gifts and can be sent directly to the recipient. Simply supply the recipient's name and mailing address as shipping information. We'll even include a letter stating the Adopt An Animal Kit is from you.

Water-dwelling members of the family Salamandridae, newts are some of the most fascinating types of amphibians. Their name is derived from variations of the Old English word efte, evolving to newt (to refer to the adult animal) during the time of Shakespeare. These unique salamanders can be found in water-rich regions throughout Europe, Southeast Asia, Japan, and both east and west of the Rocky Mountain range in North America. Some species live out their entire life cycle in the water, while others dwell on land as adults, returning to water in order to breed. Depending on the species of newt, they can have a lifespan that ranges from 2 to 15 years of age, and may range from 5-10 cm in length, and 10-50g in weight.

Much like other kinds of salamanders, newts have a lizard-like appearance, with four limbs, a distinct tail and skin that tends to be more pebble-textured in appearance in comparison to the smooth, wet skin of other salamanders. Their sensitive skin is semi-permeable, which allows them to absorb oxygen and other necessary substances, but this also means that that they’re extremely sensitive to water pollutants and changes in the water pH where they dwell. (Newt populations may be assessed as part of natural water quality assessments - serving as biological indicators of environmental health.) Newt larvae possess gills, as well as teeth on both their upper and lower jaws. The most amazing characteristic of these small amphibians is that they have phenomenal regenerative abilities – cells at the location of an injury can transform into non-distinct cells, multiply rapidly, and then differentiate themselves again in order to regenerate a new organ or limb. Newts can actually regenerate their eyes, limbs, spinal cords, hearts, intestines, and jaws multiple times!

Many newt species are also able to produce toxic skin secretions as a method of defense against predators that see them as an easy meal. The rough-skinned newt, Taricha granulosa, lives in the Pacific Northwest and is capable of producing a secretion that's toxic enough to kill an adult human. Newt toxins are only dangerous if they’re ingested, however, and species of newts that produce dangerous secretions tend to be more brightly colored, serving as a warning system of their poisonous nature to hungry predators. They can be fierce hunters themselves. Omnivorous by nature, adult newts will travel up to one kilometer in order to find worms, beetles and snails. In the case of larger newts, sometimes other smaller amphibians serve as a meal. Newt larvae survive on algae, small insects or other tadpoles. Natural predators to newts and newt larvae include fish, snakes, foxes and herons.

June and July tend to be the most common breeding months for newts in the Northern Hemisphere, with some species performing complex courtship displays. A male Great Crested Newt will actually develop a wavy crest down his back during the mating season, and will stand on his front legs and wave his tail around to attract the attention of a female. The male then mates with an accepting female by transferring a capsule of sperm, fertilizing the eggs. The eggs are laid by the female newt one by one, usually on the leaves of aquatic plants, which she then folds over to hide and protect them until hatching. The newly hatched young appear in around three weeks, and slowly change over the next few months, growing legs and developing air-breathing lungs. Once their metamorphosis is complete, the young newts, called efts at this stage in their development, leave the water and live on land. Only when they’ve grown into fully mature adults do newts return to the water to live and breed. Interestingly, North American species typically tend to spend their adult lives almost exclusively in the water, rarely venturing out of it after they reach maturity, while European species remain on land as adults, only returning to water during the mating season. In colder weather, newts generally tend to hibernate, finding hidden spots under logs, rocks, or at the bottom of ponds like other amphibians.

Many populations of newt species have been threatened by human activity. The draining of wetlands, waterfront development, and deforestation in particular are all dangerous for newt populations. For instance, exposing more ground area to direct sunlight can dry up small ponds and pools of water that are vital sites for newt breeding and spawning. Fragmentation of their habitat because of human development is also an issue for many species; if newts can’t safely travel to mate, the gene pool in a specific region can become more narrow, making the newts there more vulnerable to the side effects of inbreeding. Newts that make the attempt to move across fragmented territories may also fall victim to collisions with moving vehicles.

Water contamination is another enormous problem for newt populations. Since newts are highly sensitive to pollutants in water, temperature changes, and increased sediment in the water from runoff, species in areas where water degradation happens are at serious risk.

Finally, the capture of newts for the pet trade poses a third hazard for newts, as millions of these little amphibians are taken from the wild for commercial sale, even being sold as part of cruel living ‘keychain’ ornaments.