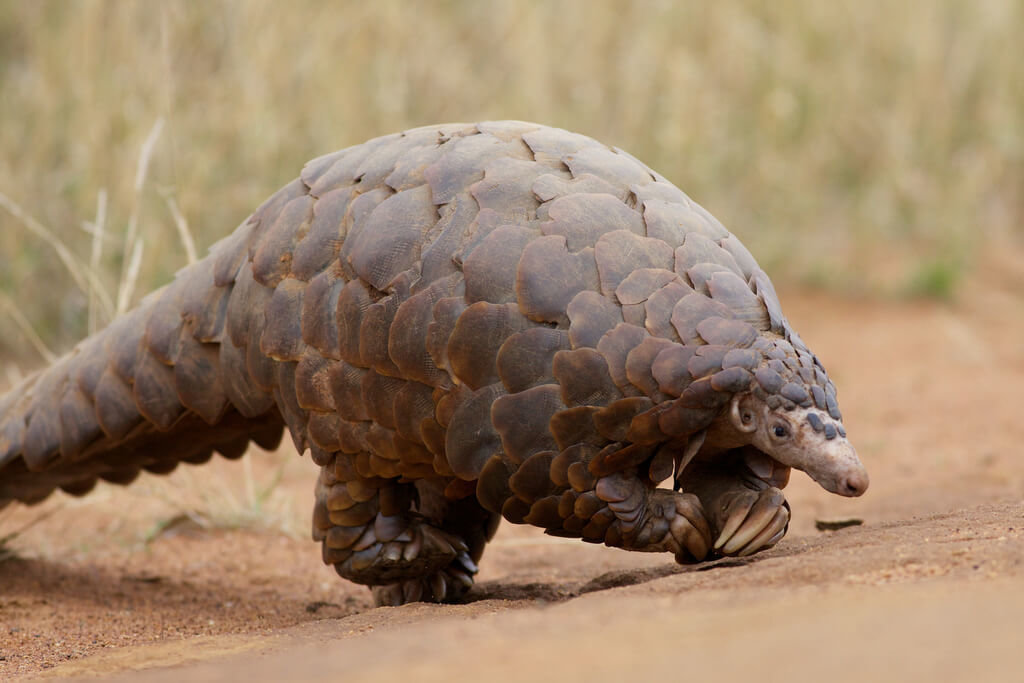 Your Adopt A Pangolin Kit comes in a Deluxe Folder and includes:

Adopt A Pangolin Kits make great gifts and can be sent directly to the recipient. Simply supply the recipient's name and mailing address as shipping information. We'll even include a letter stating the Adopt An Animal Kit is from you.

Pangolin are unusual looking animals covered in armor with long snouts and even longer tongues. Often called scaly anteaters, they are the only mammals that are covered in scales.

Pangolin bodies have hard, brown scales made of keratin – the same as human hair and nails, rhino horns and lion claws. Their scales cover their entire body except their bellies, foreheads and the inner sides of their legs. Pangolin males are usually much larger than female pangolins.

Pangolin feet have five toes. The first and last digits on their front feet are smaller than their other toes. The middle three toes are well developed. Their front legs are shorter than their back legs. Pangolins have sharp, curved, front claws used for excavating ant and termite nests, and for removing bark from trees and logs to expose prey. A few pangolin species also have long claws on their back feet.

Pangolins are insectivores, feeding only on insects. They eat 19 different species of ants and termites. Pangolins eat about 90 times each night, up to 70 million insects each year. Each feeding last about one minute. Their long, rod-shaped, sticky tongues are longer than their entire bodies. Unlike human tongues, pangolin tongues are not connected in their mouths but at the bottom of their rib cage. When not in use, their tongues are stored in their chest cavities. Pangolins stick their tongues into insect tunnels to extract their prey. They are able to keep their ears and nostrils closed to protect themselves from the insects.

Pangolins are nocturnal, active at night. Most pangolins live a solitary life. They sleep during the day in underground burrows or in trees, depending on the species. Pangolins usually use abandoned warthog, aardvark and porcupine burrows, rather than digging their own. Some pangolins live in caves, termite holes, between rocks, or in shrubs or piles of debris. Pangolins are capable swimmers.

Pangolins can live up to 20 years in the wild.

Pangolins are endangered due to extensive hunting for folk medicine ingredients in Africa and China. They are also hunted for their meat, and their skin is used in the fashion industry. Loss of habitat due to increasing development is also taking its toll on pangolins. All pangolin species are thought to be in rapid decline. Pangolins are the most trafficked mammal in the world. Over 100,000 pangolins are captured every year from the wild.