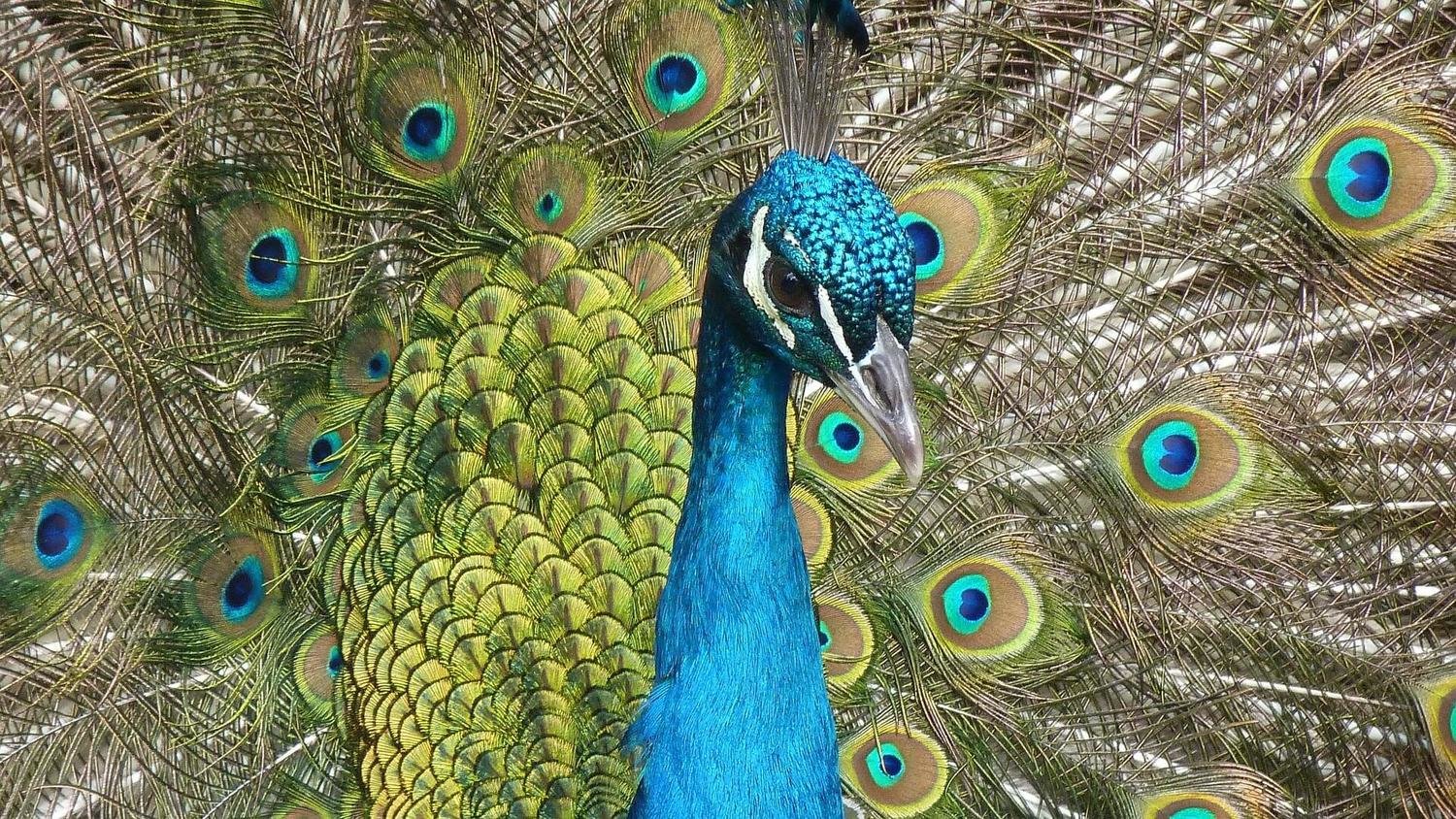 Your Adopt A Peacock Kit comes in a Deluxe Folder and includes:

Adopt A Peacock Kits make great gifts and can be sent directly to the recipient. Simply supply the recipient's name and mailing address as shipping information. We'll even include a letter stating the Adopt An Animal Kit is from you.

Peacocks, also known as peafowl, are medium sized birds most closely related to pheasants. Peacocks inhabit warm climates of the Southern Hemisphere. All peacocks are believed to have originated in Asia, but they now inhabit Africa and parts of Australia. They are most common in India. Peacocks live in deserts, dry savannas, forests and dense foliage areas.

There are three main types of peacock, the Indian peacock, the African Congo peacock and the Green peacock. All three peacock species are known for the elaborately colored feathers and tales of male peacocks. Female peacocks are dull brown.

The giant tail feathers of male peacocks, called coverts, spread out in a distinctive train of over 60 percent of the peacock’s body length. It has vibrant eye shaped markings of blue, red, gold and other colors. Microscopic, crystal-like structures in the feathers reflect different wavelengths of light creating the bright, fluorescent colors.

The train of a peacock is used for mating and defense. Male peacocks attract female peacocks by showing off this array of elaborate feathers. When threatened, they also fan their tails out in order to look larger and intimidating. When the peacock quivers his feathers, they emit a low-frequency sound inaudible to humans. The peacock can change the sound to communicate different messages. Male peacocks shed their train each year after mating season.

Despite their giant tail feathers peacocks are able to fly, though they do not fly very far. When in danger, peacocks fly up into trees. They also spend nights in trees. Peacocks can also run quickly.

Peacocks are omnivores, feeding on plants, seeds, flower heads, insects, small mammals, amphibians and reptiles. They are known for their snake-fighting abilities.

Peacocks are social birds, but very aggressive towards invaders of their territories. They often play together, especially under the sunlight. Playing peacocks always follow one direction. Peacocks usually travel in groups of up to 10 peacocks.

Peacocks are one of the loudest animals on earth, calling out to each other during the morning and late evening. Peacocks make meowing sounds when it is going to rain. They also make alarm calls when they sense danger. Male peacocks sing to attract female peacocks.

During the mating season, male peacocks mate with up to six different female peacocks. Peahen lay 4 to 8 brown eggs. Mother peacocks incubate the eggs. Peacock babies hatch following an incubation period of about one month. Mother peacocks take care of the peacock chicks without assistance from the father peacock. Male peachicks do not begin to grow their trains until they are about 3 years old.

Peacocks have numerous natural predators, including dogs, cats, raccoons, tigers and the mongoose.

Peacocks live 20 years or more in the wild.

Peacocks are threatened due to habitat loss, smuggling, hunting and predation. Peacock populations are declining. Congo peafowl is a vulnerable species, and the Green peafowl is an endangered species.

The poaching of peacocks for their feathers is one of the main reasons peacock populations have decreased by more than 50 percent.

Peacocks face habitat loss like most bird species, causing them to have fewer sources of food, shelter and water. Mining, timber harvesting, animal agriculture, acquisition of their eggs, and hunting are all contributing to reduced numbers of peacocks.

Peacocks are also victims of the pet trade and animal entertainment industry.