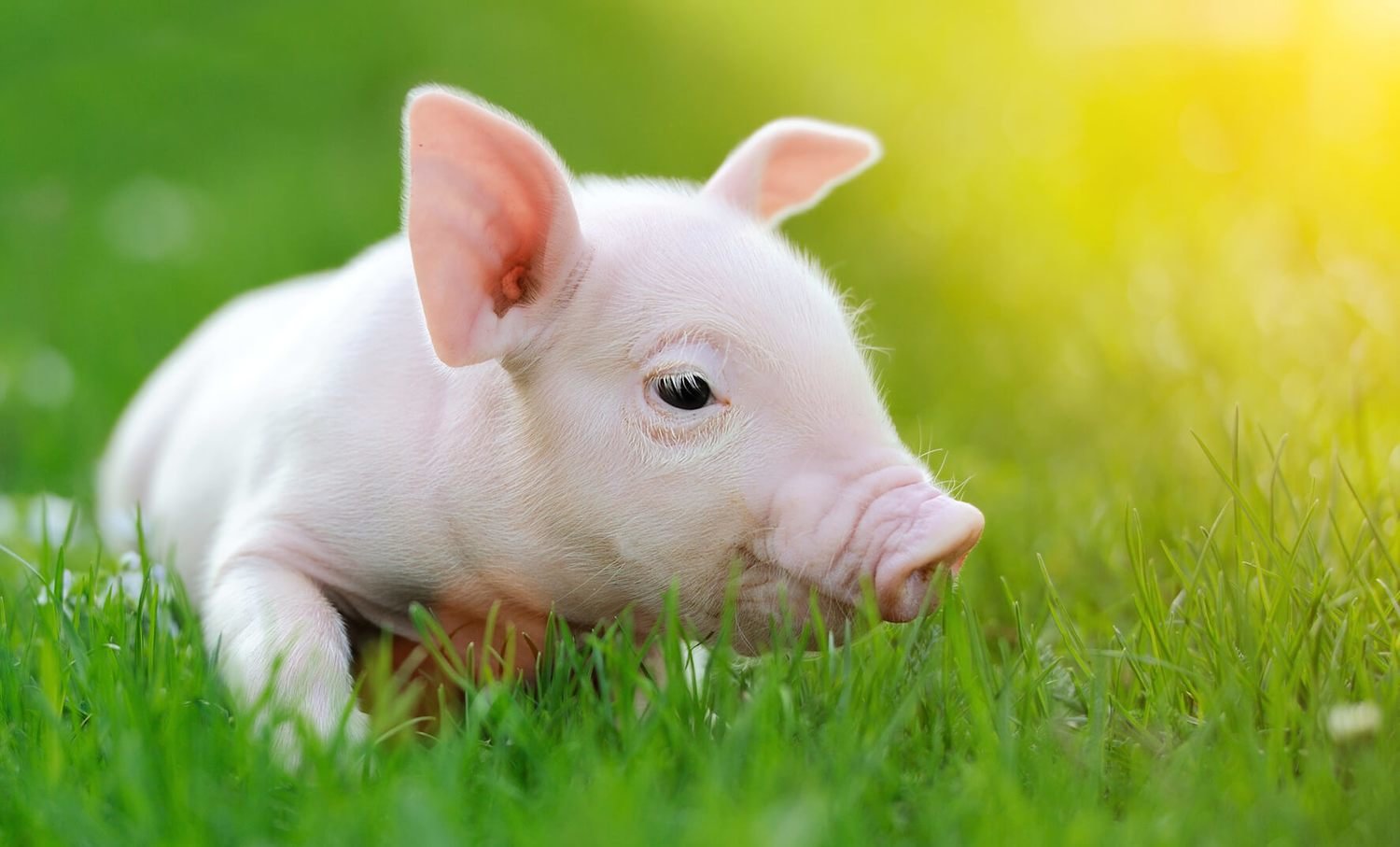 Your World Animal Foundation Adopt A Pig Kit comes in a Deluxe WAF Folder and includes:

Adopt A Pig Kits make great gifts and can be sent directly to the recipient. Simply supply the recipient's name and mailing address as shipping information. We'll even include a letter stating the Adopt An Animal Kit is from you.

Despite their reputation, pigs have many positive attributes including cleanliness, intelligence and a social nature. Pigs are indeed clean animals. Yes, they do roll in mud, but only because they can't sweat like people do; the mud (or water) actually keeps them cool. If available, pigs, who are excellent swimmers, prefer water to mud. Pigs also carefully keep their sleeping area clean, and will designate a spot as far from this area as possible for waste. Even piglets only a few hours old will leave the nest to relieve themselves.

Those who know pigs can't help but be charmed by their intelligent, highly social and sensitive nature. Pigs are actually more intelligent than any breed of dog. Like dogs, piglets learn their names by two to three weeks of age and respond when called. They are also very discriminating eaters, and are particular about their living space. Pigs enjoy novelty and are extremely active and inquisitive.

When free to roam, pigs spend much of their day enthusiastically smelling, nibbling, manipulating objects with their snouts and rooting ("nosing") about in the soil for tidbits. Rooting is so essential to a pig that some animal scientists say that "a rooting pig is a happy pig." Their powerful but sensitive snout is a highly developed sense organ. A pig's sense of smell is so keen that the animal is trained in France to unearth truffles. Using their snouts as shovels, pigs toss clumps of soil and twigs high into the air, searching for the rare and delicious fungus that grows underground near the roots of oak trees. They are also used by police to help search for drugs.

Few species are more social than pigs; they form close bonds with each other and other species, including humans. They are quite gregarious and cooperate with, and defend, one another. Adults in the entire social group will protect a piglet, leaving their own litters if necessary to defend an endangered youngster. If one pig starts to dig out tree roots, others invariably join in.

Touch and bodily contact are especially important to pigs. They seek out and enjoy close contact, and will lie close together when resting. They also enjoy close contact with people familiar to them; they like being scratched behind the ears and shoulders, and, at the touch of your hand, will grunt contentedly and roll over for a belly rub.

Pigs are vocal and communicate constantly with one another. More than 20 of their vocalizations have been identified. Pigs most often say "gronk" (more commonly known as "oink"), and will say "baawrp" when happy. They have an elaborate courtship ritual, including a song between males and females. Newborn piglets learn to run to their mother's voice, and the mother pig sings to her young while nursing. After nursing, a piglet will sometimes run to her mother's face to rub snouts and grunt. Pigs also enjoy music.

When she is ready to give birth, a sow selects a clean, dry area apart from the group, sometimes walking several miles to search for a good nest site and to gather preferred bedding materials. She hollows out a depression in the ground and lines it with grass, straw or other materials. For several days after her babies are born, she defends the nest against intruders. When her babies are five to ten days old, she encourages them to leave the nest to socialize with the other pigs.

Weaning occurs naturally at three months of age, but young pigs continue to live with their mothers in a close family group. Two or more sows and their piglets usually join together in an extended family, with particularly close friendships developing between sows. Young piglets play with great enthusiasm, play-fighting and moving or throwing objects into the air. Pigs appear to have a good sense of direction, too, as they have found their way home over great distances. Adults can run at speeds around 11 miles an hour, and can trot for relatively long distances.

Yet many pigs do not lead such noble lives; the hog industry confines many female pigs to farrowing crates, claiming these are necessary to protect piglets from being crushed by their careless mothers. Yet when given more room, sows are very gentle with their piglets. Before a mother pig lies down in a bed of straw, she roots around to make sure all the piglets are out, a safeguard against accidentally harming one of them.