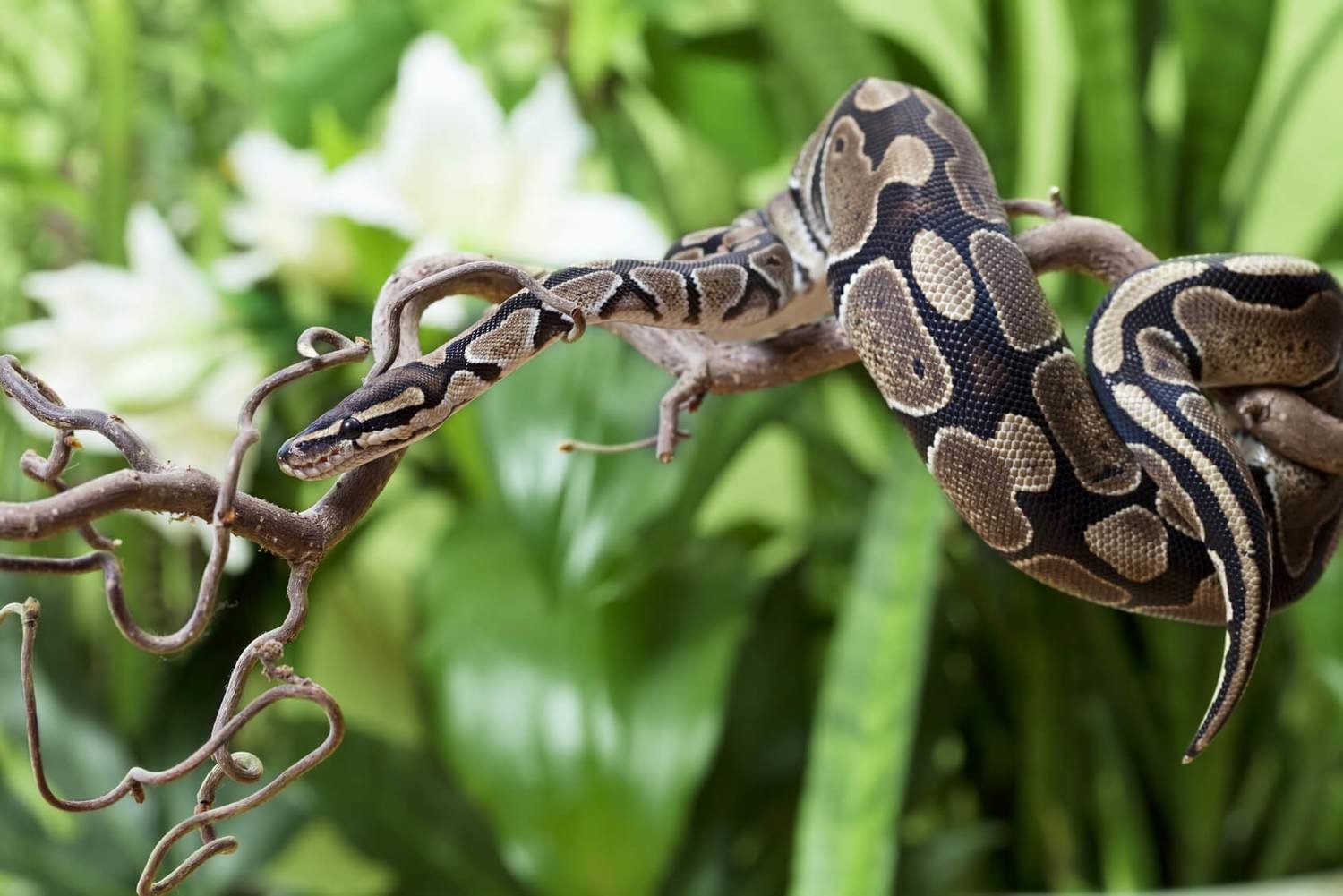 Your Adopt A Python Kit comes in a Deluxe Folder and includes:

Adopt A Python Kits make great gifts and can be sent directly to the recipient. Simply supply the recipient's name and mailing address as shipping information. We'll even include a letter stating the Adopt An Animal Kit is from you.

Python is the common name for a group of non-venomous constricting snakes, specifically the family Pythonidae. Other sources consider this group a subfamily of the Boas (Pythoninae). Pythons are more related to boas than to any other snake-family. There is also a genus within Pythonidae which carries the name Python (Daudin, 1803). Pythons are distinguishable from boas in that they have teeth on the premaxilla, a small bone at the very front and center of the upper jaw. Most boas produce live young, while pythons produce eggs. Some species of sandboas (Ericinae) are also called python.

Pythons are found in Australia, Southeast Asia, India and Africa. Most pythons live in the dense underbrush of rugged tropical rainforest regions. They are excellent climbers; some species, like the green tree python, are arboreal. Like all snakes, they are also capable swimmers.

Pythons range in size from 15 to 20 feet in length. They are among the longest species of snake in the world. The reticulated python holds the record for longest snake at 32 feet, 9.5 inches. Some species exhibit vestigial bones of the pelvis and rear legs, which are externally apparent in the form of a pair of anal spurs on each side of the cloaca. These spurs are larger in males than females, and are used by the male to stimulate the female during copulation. Some pythons display vivid patterns on their scales, while others are a nondescript brown. They usually reflect appropriate camouflage for their native habitat.

Pythons are constrictors, and feed on birds and mammals, killing them by squeezing them to death. They coil themselves up around their prey, tighten, but merely squeeze hard enough to stop the prey's breathing and/or blood circulation. Large pythons will usually eat something about the size of a house cat, but larger food items are not unknown. They swallow their prey whole, and take several days or even weeks to fully digest it.

Despite their intimidating size and muscular power, they are generally not dangerous to humans. While a large adult python could kill a human being (most likely by strangling rather than actual crushing), humans are outside the normal size range for prey. Reports of python attacks on humans are extremely rare. Despite this, pythons have been aggressively hunted, driving some species (like the Indian python) to the brink of extinction.

Most pythons have heat-sensing organs in their lips. These enable them to detect objects that are hotter than the surrounding environment. Pythons that do not have heat-sensing organs identify their prey by smell. Pythons are ambush predators: they typically stay in a camouflaged position and then suddenly strike at passing prey. Females protecting their eggs can be aggressive.

Pythons lay eggs which they arrange in a pile. They coil around the pile until all eggs have hatched. Since pythons cannot regulate their internal body temperature, they cannot incubate their eggs per se; instead, they raise the temperature of their eggs by small movements of their body - essentially, they "shiver".

Collection for the exotic pet trade threatens pythons. Every year, a variety of sources provides millions of animals to the exotic pet trade. Animals are captured from their native habitat and transported to various countries to be sold as “pets”. Others are surplus animals from zoos or their offspring. Backyard breeders also supply exotic animals. The sellers of these animals often disregard state or local laws regulating private possession of exotics, and the dangers, difficulties, physical and physiological needs of the animals they peddle. The suffering of the animals in the hands of unqualified and hapless buyers appears to be of no concern in the lucrative exotic pet trade. Reptiles pose safety risks to humans. Many incidents have been reported of escapes, strangulations, and bites from pet reptiles across the country.

Pythons are also victims of the animal entertainment industry. The use of wild animals as “entertainers” removes animals from their natural habitat; depriving them of the ability to freely engage in instinctual behaviors. Both children and adults are desensitized to animal mistreatment by the animal entertainment industry. Even under the best of circumstances, captivity is cruel for wild animals. Confined to tiny areas and gawked at by crowds, animals in exhibits and acts endure constant stress. They may suffer from temperature extremes and irregular feeding and watering. Without exercise, they become listless, their immune systems are weakened, and they become prone to sickness; many resort to self-mutilation in reaction to stress or boredom. Mental illness is rampant among confined animals. Torn from their families and deprived of all dignity, every part of their lives is controlled by their captors. While zoos may appear to be educational and conservation-oriented, most are designed with the needs and desires of the visitors in mind, not the needs of the animals.