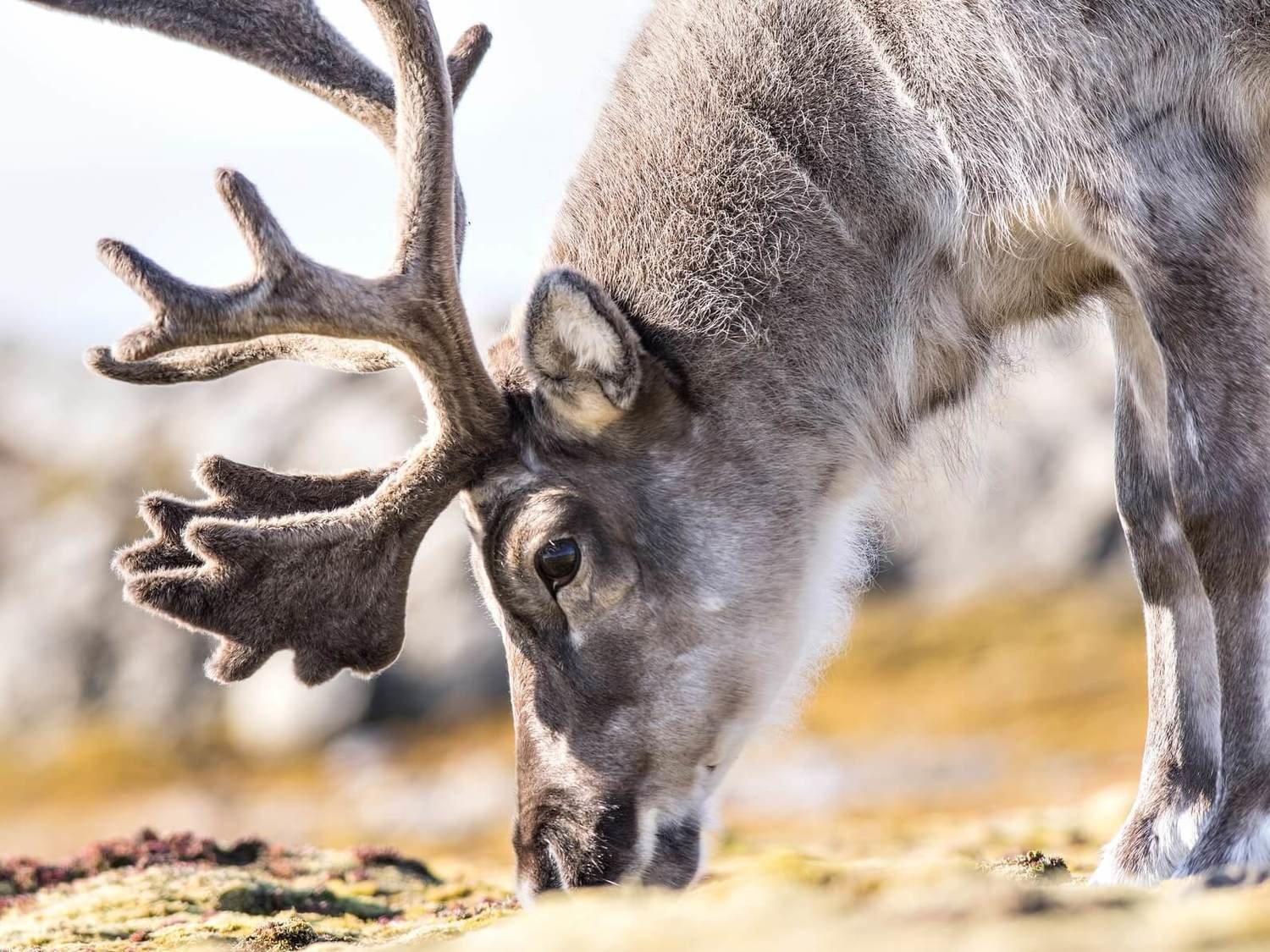 Your Adopt A Reindeer Kit comes in a Deluxe Folder and includes:

Adopt A Reindeer Kits make great gifts and can be sent directly to the recipient. Simply supply the recipient's name and mailing address as shipping information. We'll even include a letter stating the Adopt An Animal Kit is from you.

The reindeer, also known as the caribou in North America, is a deer from the Arctic and Subarctic, including both resident and migratory populations. While overall widespread and numerous, some of its subspecies are rare and one has already gone extinct.

Reindeer vary considerably in color and size. Both sexes grow antlers, though they are typically larger in males. There are a few populations where females lack antlers completely.

Even far outside its range, the reindeer is well known due to the myth, probably originating in early 19th century America, in which Santa Claus's sleigh is pulled by flying reindeer, a popular secular element of Christmas.

The reindeer is a widespread and numerous species in the north. In North America, they were once found in Canada, Alaska and the northern conterminous USA from Washington to Maine. Wild reindeer have disappeared from many areas. Large populations of wild reindeer are still found in Norway, Finland, Siberia, Greenland, Alaska and Canada.

Female reindeer usually measure 64–81 inches in length and weigh 170–260 lb. The males (or "bulls") are typically larger (although the extent to which varies in the different subspecies), measuring 71–84 inches in length and usually weighing 200–460 lb, though exceptionally large males have weighed as much as 700 lb. Shoulder height typically measure from 33 to 59 inches, and the tail is 5.5 to 7.9 inches long. The subspecies R. t. platyrhynchus from Svalbard Island is very small compared to other subspecies.

In most populations both sexes grow antlers, which (in the Scandinavian variety) for old males fall off in December, for young males in the early spring, and for females in the summer. The antlers typically have two separate groups of points, a lower and upper. There is considerable variation in the size of the antlers (e.g., rather small and spindly in the northernmost subspecies), but in some subspecies the bull reindeer's antlers are the second largest of any extant deer, after the moose, and can range up to 39 inches in width and 53 inches in beam length. They have the largest antlers relative to body size among deer.

Reindeer have specialized noses featuring bones that dramatically increase the surface area within the nostrils. Incoming cold air is warmed by the animal's body heat before entering the lungs, and water is condensed from the expired air and captured before the deer's breath is exhaled, used to moisten dry incoming air and possibly absorbed into the blood through the mucous membranes.

Reindeer hooves adapt to the season: in the summer, when the tundra is soft and wet, the footpads become sponge-like and provide extra traction. In the winter, the pads shrink and tighten, exposing the rim of the hoof, which cuts into the ice and crusted snow to keep it from slipping. This also enables them to dig down (an activity known as "cratering") through the snow to their favorite food, a lichen known as reindeer moss. The knees of many species of reindeer are adapted to produce a clicking sound as they walk.

Reindeer are believed to be the only mammals that can see ultraviolet light. It is thought that this ability helps them to survive in the Arctic, because many objects that blend into the landscape in normally visible light, such as urine and fur, produce sharp contrasts in ultraviolet.

Reindeer are ruminants, having a four-chambered stomach. They mainly eat lichens in winter, especially reindeer moss. However, they also eat the leaves of willows and birches, as well as sedges and grasses. There is some evidence to suggest that on occasion they will also feed on lemmings, arctic char and bird eggs.

Mating occurs from late September to early November. Males battle for access to females. Two males will lock each other's antlers together and try to push each other away. The most dominant males can collect as many as 15-20 females to mate with. A male will stop eating during this time and lose much of its body reserves. Calves may be born the following May or June. After 45 days, the calves are able to graze and forage but continue suckling until the following autumn and become independent from their mothers.

Some populations of the North American caribou migrate the furthest of any terrestrial mammal, traveling up to 3,100 miles a year, and covering 390,000 square miles. Other populations (e.g., in Europe) have a shorter migration, and some, for example the subspecies R. t. pearsoni and R. t. platyrhynchus (both restricted to islands), are residents that only make local movements.

Normally traveling about 12–34 miles a day while migrating, the caribou can run at speeds of 37–50 mph. During the spring migration smaller herds will group together to form larger herds of 50,000 to 500,000 animals, but during autumn migrations the groups become smaller, and the reindeer begin to mate.

During the winter, reindeer travel to forested areas to forage under the snow. By spring, groups leave their winter grounds to go to the calving grounds. A reindeer can swim easily and quickly, and migrating herds will not hesitate to swim across a large lake or broad river.

A variety of predators prey heavily on reindeer. Golden eagles prey on calves and are the most prolific hunter on calving grounds. Wolverines will take newborn calves or birthing cows, as well as (less commonly) infirm adults. Brown bears and polar bears prey on reindeer of all ages, but like the wolverines they are most likely to attack weaker animals, such as calves and sick deer. The gray wolf is the most effective natural predator of adult reindeer, especially during the winter. As carrion, caribou are fed on by foxes, ravens and hawks. Blood-sucking insects, such as black flies and mosquitoes, are a plague to reindeer during the summer and can cause enough stress to inhibit feeding and calving behaviors.

Reindeer are often victims of the animal entertainment industry, especially due to their association with the Christmas holiday. Their welfare is severely compromised when kept in captivity, often resulting in illness and death due to poor management, dietary and environmental requirements. Using live animals as living props sends a disturbing message to children that animals are nothing more than objects to be used for human entertainment.

Even under the best of circumstances, captivity is cruel for wild animals. Confined to tiny areas and gawked at by crowds, animals in exhibits and acts endure constant stress. They may suffer from temperature extremes and irregular feeding and watering. Without exercise, they become listless, their immune systems are weakened, and they become prone to sickness; many resort to self-mutilation in reaction to stress or boredom. Mental illness is rampant among confined animals. Torn from their families and deprived of all dignity, every part of their lives is controlled by their captors.