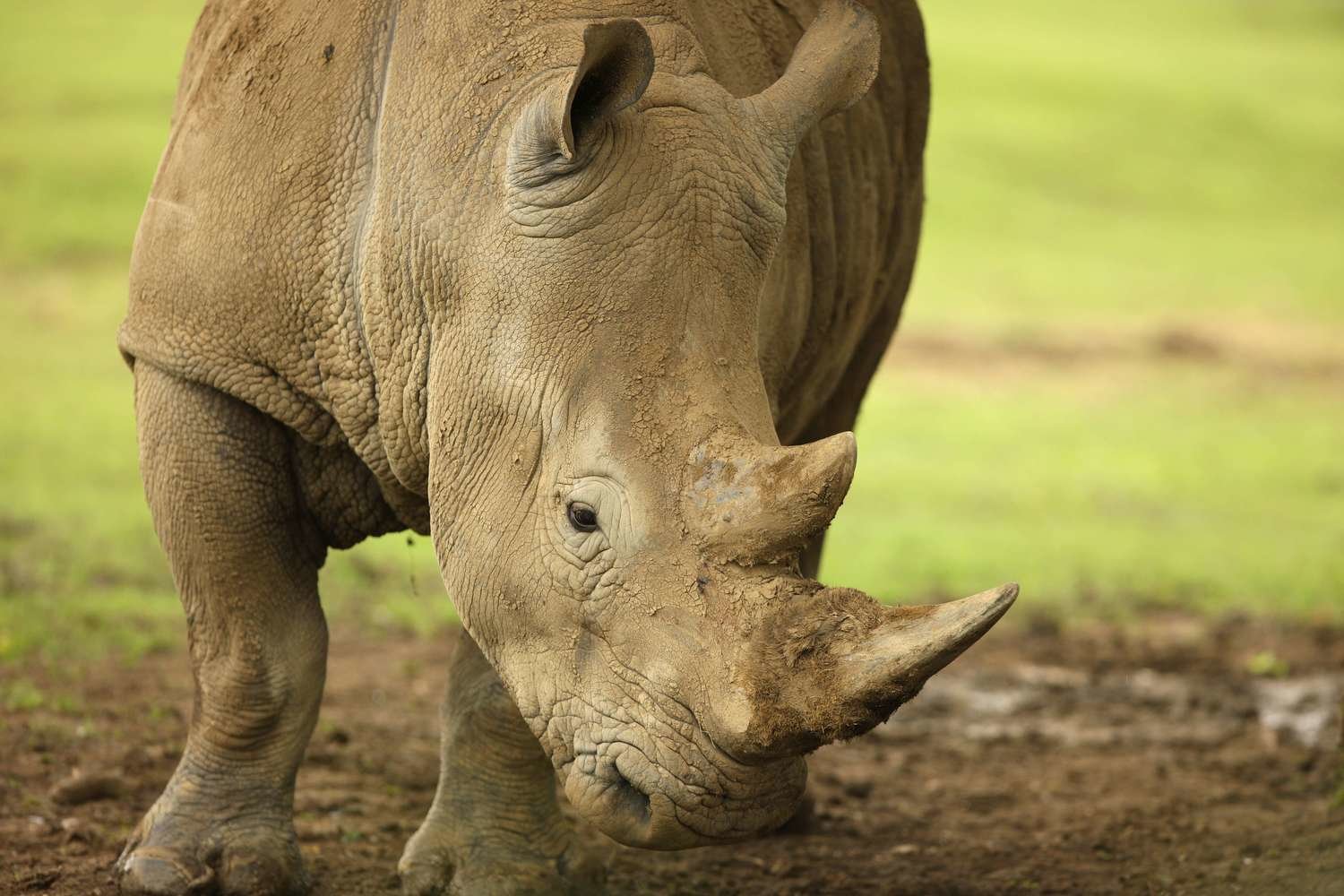 Your World Animal Foundation Adopt A Rhinoceros Kit comes in a Deluxe WAF Folder and includes:

Adopt A Rhinoceros Kits make great gifts and can be sent directly to the recipient. Simply supply the recipient's name and mailing address as shipping information. We'll even include a letter stating the Adopt An Animal Kit is from you.

Lumbering members of the family Rhinoerotidae, rhinoceroses (or rhinos) are some of the largest land animals on earth today, aside from elephants. These gigantic herbivores are spread over a mere five species and are native to only a few places in the world. Two species originate in Africa (the black and white rhinos), and three in Southern Asia (the Sumatran, Indian, and Javan rhinos). Although they all fall under the same family classification, the divergence that emerged in each rhino species actually occurred between 5-14 million years ago, shown by their very genetic makeup. In fact, the black rhino is the only one to have 84 chromosomes, while all other species have 82. Their preferred habitat depends on their species and diet – they can be found on open savannah, in scrub or bush land, wooded areas, and lowland rainforests.

In spite of their differences, the basic structure a rhino is similar between species; all have large, heavy bodies, three toes, and an elongated skull that encases a relatively small brain. Rhinos can range significantly in weight and size (though all weigh well over 500kg), with the smallest (Sumatran) rhinos weighing around 700kg (1500lb) and standing around 1.3m (just over 4 ft) at the shoulder, and the largest (white) rhinos weighing in as heavy as 2400kg (5000lb) and standing from 1.8 to 2 meters (5.9 to 6.6 ft) in height – more than an average compact car. Their thick, tough, and textured skin tends to fall in folds over their body, making it seem as if they’re wearing armor, and usually ranges from yellowish to gray in color, with bristly hair on their tail and ears. Sumatran rhinos tend to be more reddish brown, however, and are often hairier than their African relatives. Most species usually live, on average, up to 40 years, though illegal poaching is an enormous danger for all wild rhino species.

The most well-known rhino feature is their horn, of course (though white, black, and Sumatran rhinos have two), which is made up of a durable substance called keratin – the same material that’s found in our fingernails. Males of each species have larger horns than the females. Sumatran females have only stubby horns or occasionally no horn at all. The two African rhino species look most alike. Despite their name, it’s not the appearance of black and white rhinos that offers a clue to their separate classification; the black rhino is much smaller than the white, and has a pointed, beak-shaped mouth that’s perfect for browsing on twigs and leaves, while white rhinos are almost exclusively grazers, using their square, wide lips to munch on grass.

Although their massive size might give the impression of sluggishness, rhinos are far from lazy. They can run at speeds reaching up to 55km an hour (34 mph) for short distances, charging with surprising agility if they feel threatened. And though they tend to have poor eyesight, their senses of smell and hearing are excellent. Rhinos also have a wide range of vocal sounds that they use for communication; pants, grunts and snorts are usually heard during courtship or mating, while shrieks, bellows and squeals are used for threat displays and territorial posturing. Male rhinos will often scrape their horn across the ground as well before charging.

These enormous plant eaters spend most of their day browsing for food to power their immense frames, though some species limit most of their feeding to the cooler hours of the early morning and evening. Grass, shoots, leafy plants, branches, aquatic plants, thorny bushes and fruit may make up a meal. Rhinos can be creative about how they access their food; the Indian rhino, for example, tramples grass and plants until they’re pushed down to mouth level, or use their lips to grab grass stems, bending them to bite the top off and eat the shoot. They’ll normally only drink once or twice a day for a few minutes at a time, but wallowing in mud holes, lakes or rivers to cool down is definitely a favorite occupation for all rhinos.

Although most rhino species tend to be solitary dwellers, usually only coming together to mate or gather at water holes, white rhinos tend to gather in larger herds called crashes. Both male and female rhinos use urine spraying and dung dropping to mark their territorial ranges, especially around popular browsing areas, water sources, and trails. While male rhinos are the most territorial, often battling other males who enter their range, all rhinos can be extremely fast to perceive threats and charge. Rhinos have even been known to attack cars, trees and termite mounds.

Because of the time they take to reach maturity and the length of gestation, rhinos are not prolific producers of offspring. Reaching maturity around age five, females are able to reproduce, but males of some species mature later, around seven years of age, and often can’t mate until they’re even older and larger and can achieve sexual dominance over other males in the region. After a short courtship, breeding pairs will stay together for days or even weeks, mating several times a day. Rhino calves are born around 15 to 16 months later, able to stand, walk and follow their dam after only a few days. Calves generally stay with the female until they’re around 2-3 years of age. Most rhinos have no specific seasonal pattern for mating season, though the majority of rhino calves in drier regions tend to be born near the end of a rainy season.

The daunting size, thick skin, and aggressive nature of the rhino means that it has very few natural predators, though big cats and hyenas will sometimes hunt young calves. Human activity is above and beyond the biggest threat to rhino populations everywhere. In spite of ever-increasing restrictions and protections for rhinos, illegal poaching for the purpose of harvesting their horns has decimated rhino populations, placing many subspecies on the list of critically endangered animals, and has even caused total extinction of some subspecies in certain areas (such as the disappearance of the Javan rhino in Vietnam). Movement of agricultural development onto rhino habitat, and the introduction of invasive plant species in other regions has also been a contributing factor in the decline of some rhino populations.

Some zoos attempt to breed rhinos in captivity, however reproductive rates are low due to medical problems likely caused by improper diet and unnatural living conditions. Like all captive wildlife, rhions face constant stress and are denied their wild nature and social structures. The needs and desires of humans comes before the needs of the animals in the animal entertainment industry. Captive bred zoo animals are rarely released in the wild.