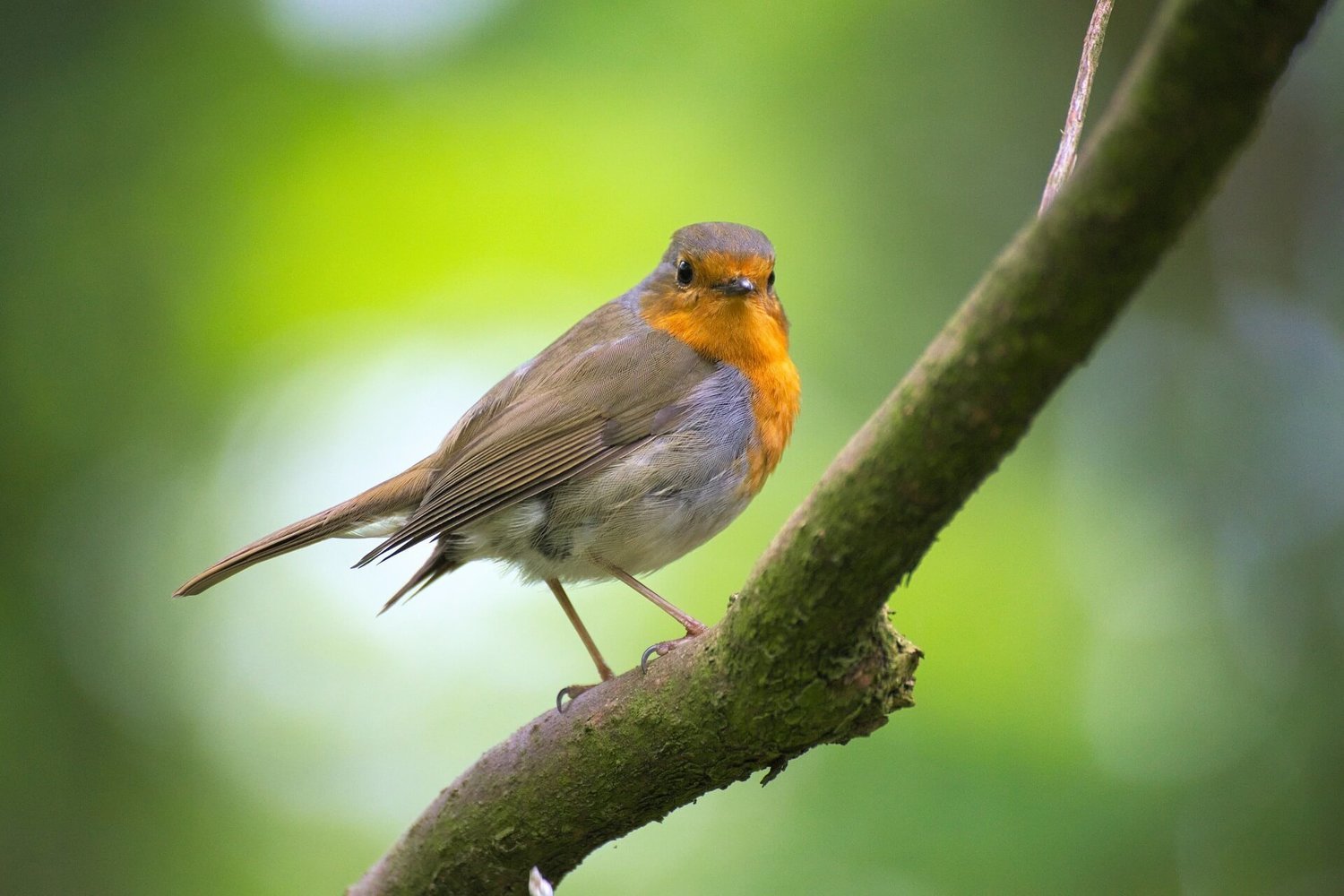 Your Adopt A Robin Kit comes in a Deluxe Folder and includes:

Adopt A Robin Kits make great gifts and can be sent directly to the recipient. Simply supply the recipient's name and mailing address as shipping information. We'll even include a letter stating the Adopt An Animal Kit is from you.

The quintessential early bird who catches the worm, robins are common birds around the world known for their orange breasts and cheery songs. They are one of the first birds to start the dawn chorus and one of the last to stop singing at night. Robins are a familiar site in towns and cities, as well as woodlands, forests, mountains and tundra.

European robins have bright orange/red chests and are the most distinctive robin family species. The New Zealand robin and the North American robin are brown in color. Australasian robins are small with stocky builds and rounded heads.

Robins are omnivorous animals who feed on both plants and animals. Robins eat mostly insects and worms by swooping down on them or by ground foraging. Robins may perch on tree branches and in hedgerows watching for prey. When ground foraging, robins will run a few steps, then stop abruptly. In long grass they may fly or hop just above the ground. Robins often spot their prey by staring, motionless, at the soil with their heads cocked to one side. Sometimes robins will fight over food sources. Robins also eat seeds and fruits when they are available. They become intoxicated when they eat honeysuckle berries.

Robins have a complex and almost continuous song, often described as a cheerily carol. Their songs vary regionally, and the styles vary throughout the day. Robins are usually the first songbirds singing as dawn rises, and the last songbirds singing as evening sets in. Robins also sing when storms approach and when storms have passed. Robins have numerous other calls used for communicating.

Although robins are considered harbingers of spring, most robins do not migrate. They spend much of the winter roosting in tress and are less often seen. Some robins in cold climates migrate south to warmer areas during the winter.

During the summer, female robins sleep at their nests while male robins gather at roosts. Robin roosts can include a quarter-million birds in the winter. In the fall and winter robins often roost in large flocks. In the spring, male robins attempt to attract females by singing, shaking their wings, raising and spreading their tails and inflating their throats. Male and female robins may approach one another with bills wide open, and then touch them.

Robins build nests in trees, hedgerows or man-made structures not far from the ground. They build their nests from the inside out, pressing collected materials into a cup shape using the wrist of one wing. Nests are reinforced with soft mud gathered from worm castings. Mother robins lay 4 or 5 eggs that hatch following an incubation of less than 2 weeks. While male robins do not assist in incubating the eggs, they do bring the female robins food. Once the babies hatch, mother robins help the father robins collect food. Baby robins are a brown color and do not develop bright orange chests until they are older. Both parents feed robin chicks for the first month. Sometimes robin families will move to a new nest in an area where food is more plentiful. When young robins become independent, males will join the males while females wait to go to the roosts only after they have finished nesting.

Being small birds, robins have numerous natural predators including foxes, cats, dogs, raccoons and larger birds. Other animals, such as rodents and snakes, eat robin eggs.

Robins can live over 14 years in the wild.

The biggest threat to robins and all birds is habit loss caused by human development, deforestation and animal agriculture. Habitat loss reduces bird populations by reducing the available resources, denying birds the chance to reproduce.

While cats are often used as the scapegoats for bird population declines, cats have been a part of the natural environment, living outdoors, for over 10,000 years. By far irresponsible human activities are the biggest cause of bird numbers plummeting.

Since robins often forage on lawns, they are vulnerable to pesticides and chemical pollution.

All birds are at risk by changes in climate.