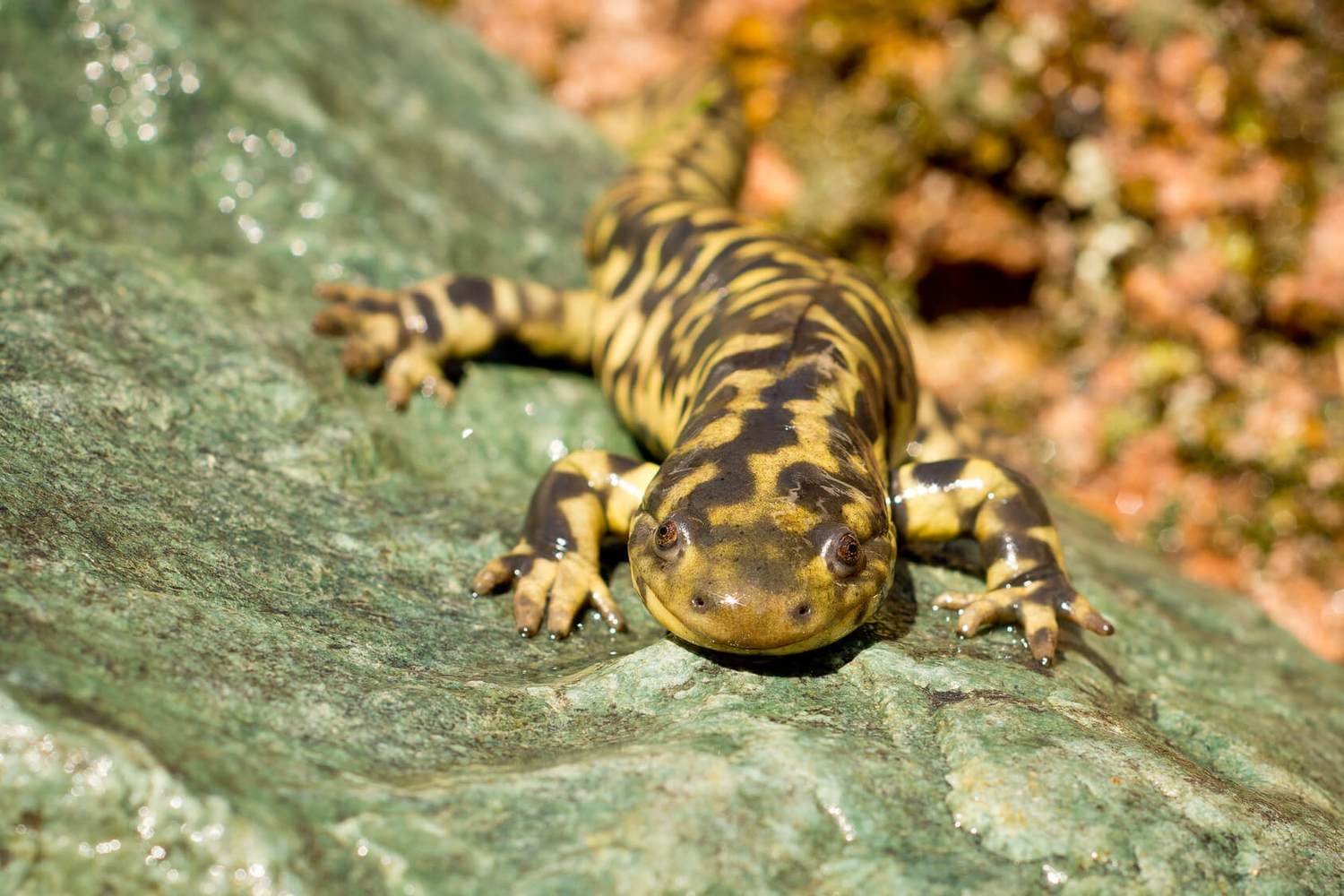 Your World Animal Foundation Adopt A Salamander Kit comes in a Deluxe WAF Folder and includes:

Adopt A Salamander Kits make great gifts and can be sent directly to the recipient. Simply supply the recipient's name and mailing address as shipping information. We'll even include a letter stating the Adopt An Animal Kit is from you.

The salamander is an amphibian animal that has four legs, a slender and long body and a long tail. A salamander's rear legs develop more gradually than its front legs. (Toads and frogs are the opposite: their rear legs develop more rapidly than their front legs.) The four legs on a salamander are short to the point that its belly drags on ground. In spite of their lizard-like nature, salamanders are closely related to the smaller amphibians called newts.

Salamanders are found everywhere throughout the world, mostly in more temperate areas. One-third of the known salamander species are found in North America. The highest concentration of these is found in the Appalachian Mountains region. All the species of salamander are aquatic and semi-aquatic because of their permeable skin and amphibious nature.

Like lizards and newts, salamanders are able to regenerate or regrow lost limbs and other parts of the body. This gives salamanders leeway while being chased by predators, as the salamander has the ability drop parts of its body to escape.

Some salamander species utilize tail autotomy to escape their predators. The tail drops off and also wriggles around for some time after an attack. The salamander either stays still or runs away while the predator is diverted. The tail regrows within time, and salamanders routinely regrow other complex tissues, including the retina or lens of their eyes. In just a couple of weeks of losing a part of a limb, a salamander reforms the missing parts.

The majority of salamander species are brightly colored, especially the male salamanders amid the breeding period when their colors get to be brighter and more intense to attract the female salamanders. Species of salamanders that live underground are mostly white or pink in color because their skin is never exposed to the sun.

The skin of salamanders secretes bodily fluid, which helps keep salamanders moist when on dry land and keeps up their salt balance while in water. It also provides a lubricant during swimming. Salamanders additionally secrete a poisonous substance from the glands in their skin, and some also possess skin glands for secreting courtship pheromones.

Respiration varies among the distinctive species and can include lungs, skin, gills, and the membranes of the throat and mouth. Larval salamanders breathe essentially by mean of gills that are mostly feathery and external in appearance. Water is drawn in via the mouth and flows out via the gill slits. Some neotenic species like the mudpuppy maintain their gills for the duration of their lives, however, most species lose them during metamorphosis.

A terrestrial salamander catches its prey by flicking out its sticky tongue in an action that takes less than half a second. An aquatic salamander lacks muscles in the tongue, and captures its prey in an entirely different manner. It grabs the food item, grasps it with its teeth, and adopts a kind of inertial feeding. This involves tossing its head about, drawing water sharply in and out of its mouth, and snapping its jaws which tears and macerates the prey before being swallowed.

Salamanders are not vocal and in most species the sexes look alike, so they use olfactory and tactile cues to identify potential mates. Pheromones play an important part in the process. In about 90% of all species, fertilization is internal. The male typically deposits a spermatophore on the ground or in the water according to species, and the female picks this up with her vent. Often an elaborate courtship behavior is involved in its deposition and collection. In the most primitive salamanders such as the Asiatic salamanders and the giant salamanders, external fertilization occurs, instead. In these species, the male releases sperm onto the egg mass in a reproductive process similar to that of typical frogs.

In temperate regions, reproduction is usually seasonal and salamanders may migrate to breeding grounds. Males usually arrive first and in some instances set up territories. Typically, a larval stage follows in which the babies are fully aquatic. The tadpoles are carnivorous and the larval stage may last from days to years, depending on species. Sometimes this stage is completely bypassed, and the eggs of most lungless salamanders develop directly into miniature versions of the adult without an intervening larval stage.

A general decline in amphibian species has been linked with the fungal disease chytridiomycosis. A higher proportion of salamander species than of frogs or caecilians are in one of the at-risk categories established by the IUCN. Salamanders showed a significant diminution in numbers in the last few decades of the 20th century, although no direct link between the fungus and the population decline has yet been found. Deforestation, resulting in fragmentation of suitable habitats, and changes in climate are possible contributory factors.

The Chinese giant salamander, at 6 feet the largest amphibian in the world, is critically endangered, as it is collected for food and for use in traditional Chinese medicine. The hellbender is another large, long-lived species with dwindling numbers and fewer juveniles reaching maturity than previously. Habitat loss, silting of streams, pollution and disease have all been implicated in the decline.

Of the 20 species of minute salamanders in Mexico, half are believed to have become extinct and most of the others are critically endangered. Specific reasons for the decline may include climate change, chytridiomycosis, or volcanic activity, but the main threat is habitat destruction as logging, agricultural activities, and human settlement reduce their often tiny, fragmented ranges.