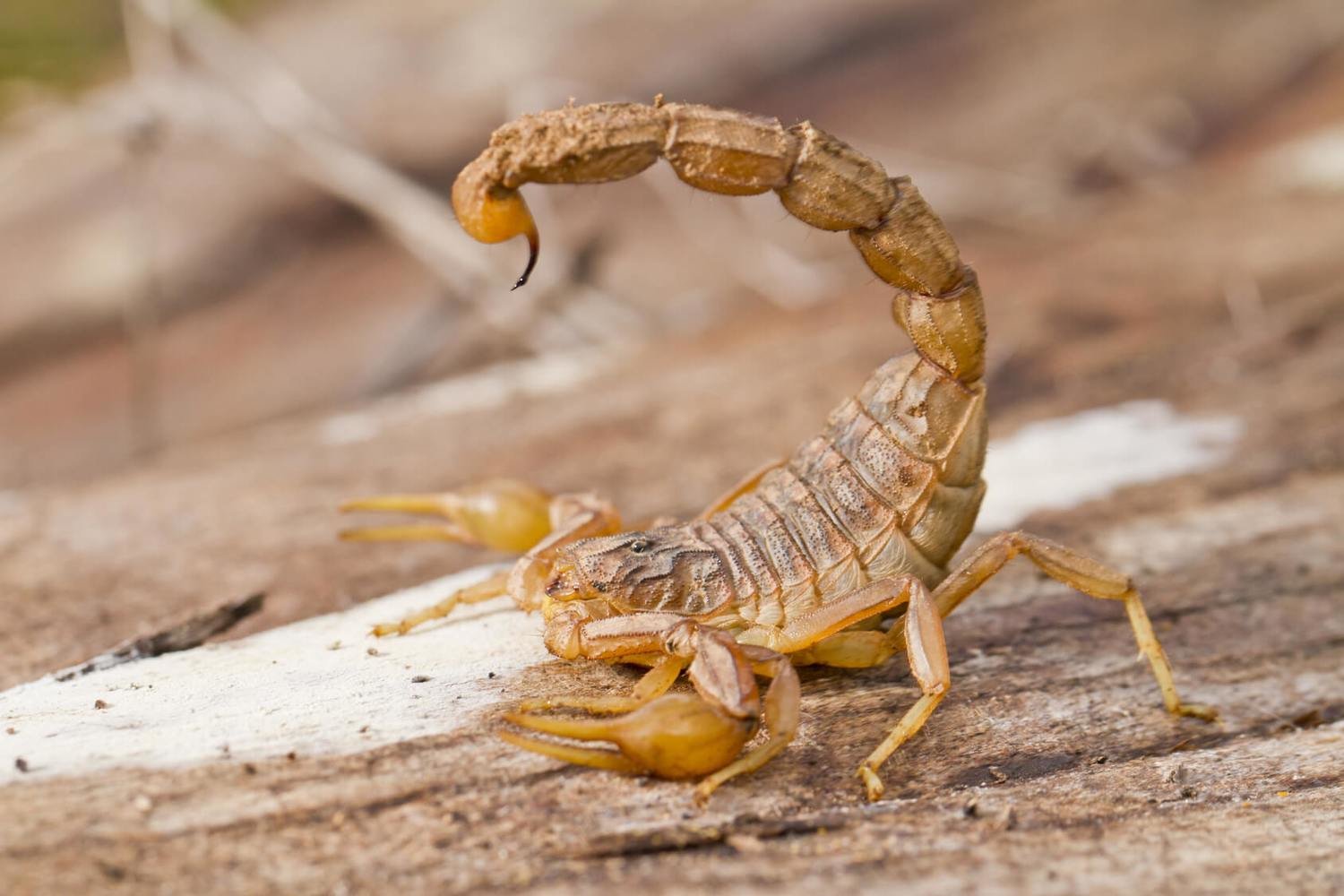 Your Adopt A Scorpion Kit comes in a Deluxe Folder and includes:

Adopt A Scorpion Kits make great gifts and can be sent directly to the recipient. Simply supply the recipient's name and mailing address as shipping information. We'll even include a letter stating the Adopt An Animal Kit is from you.

Scorpions are predatory arthropod animals of the order Scorpiones within the class Arachnida. They have eight legs and are easily recognized by a pair of grasping pincers (claws) and the narrow, segmented tail, often carried in a characteristic forward curve over the back, ending with a venomous stinger. They have adapted to a wide range of environmental conditions and can now be found on all continents except Antarctica. Scorpions did not occur naturally in Great Britain, New Zealand and some of the islands in Oceania, but now have been accidentally introduced in some of these places by human trade and commerce.

Scorpions are invertebrates but are not considered insects. Scorpions, along with ticks, mites, harvestmen and spiders, are called arachnida.

Scorpions number about 1,750 described species. Only about 25 of these species are known to have venom capable of killing a human being.

Scorpions prefer areas where the temperatures range from 68 to 99 °F, but may survive temperatures ranging from well below freezing to desert heat. They are nocturnal and fossorial (adapted to digging and life underground), finding shelter during the day in the relative cool of underground holes or undersides of rocks, and emerging at night to hunt and feed. Scorpions exhibit photophobic behavior (they prefer to stay out of the light), primarily to evade detection by predators such as birds, centipedes, lizards, mice, possums and rats.

Scorpions are opportunistic predators of small arthropods, although the larger kinds have been known to kill small lizards and mice. The large pincers are studded with highly sensitive tactile hairs, and the moment an insect touches these, they use their pincers to catch the prey. Depending on the toxicity of their venom and size of their claws, they will then either crush the prey or inject it with neurotoxic venom. This will kill or paralyze the prey so the scorpion can eat it. Scorpions have an unusual style of eating using chelicerae, small claw-like structures that protrude from the mouth. The chelicerae, which are very sharp, are used to pull small amounts of food off the prey. Scorpions can ingest food only in a liquid form; they have external digestion. Digestive juices from the gut are excreted onto the food to liquify it.

Scorpions can consume huge amounts of food at one sitting. They have a very efficient food storage organ and a very low metabolic rate combined with a relatively inactive lifestyle. This enables scorpions to survive long periods when deprived of food; some are able to survive 6 to 12 months of starvation. Scorpions excrete very little waste.

Most scorpions reproduce sexually, and most species have male and female individuals. However, some species reproduce through parthenogenesis, a process in which unfertilized eggs develop into living embryos.

Scorpions possess a complex courtship and mating ritual. Mating starts with the male and female locating and identifying each other using a mixture of pheromones and vibrational communication. Once they have satisfied the other that they are of opposite sex and of the correct species, mating can commence. The courtship starts with the male grasping the female; the pair then perform a dance called the "promenade à deux". In this dance, the male leads the female around searching for a suitable place to deposit his sperm capsule. When the male has identified a suitable location, he deposits the capsule and then guides the female over it. This allows the capsule to enter her, which triggers release of the sperm, thus fertilizing the female. The mating process can take from 1 to over 25 hours. Once the mating is complete, the male and female will separate. The male will generally retreat.

Baby scorpions are carried about on their mother's back until they have undergone at least one moult. Before the first moult, scorplings cannot survive naturally without the mother, since they depend on her for protection and to regulate their moisture levels. Mothering can continue for an extended period of time. The size of the litter depends on the species and environmental factors, and can range from two to over a hundred scorplings. The average litter, however, consists of around 8 scorplings.

Baby scorpions generally resemble their parents. Growth is accomplished by periodic shedding of the exoskeleton. Scorpions typically require between five and seven moults to reach maturity. Moulting commences with a split in the old exoskeleton. The scorpion then emerges from this split. When it emerges, the scorpion's new exoskeleton is soft, making the scorpion highly vulnerable to attack. The scorpion must constantly stretch while the new exoskeleton hardens to ensure that it can move when the hardening is complete.

All known scorpion species possess venom and use it primarily to kill or paralyze their prey so that it can be eaten. In general, it is fast-acting, allowing for effective prey capture. However, as a general rule they will kill their prey with brute force if they can, as opposed to using venom. Venom is also used as a defense against predators.

Like most animals, the primary threat to scorpions is the destruction of their habitat. Human development has taken an alarming toll on the environment. Impact from land use practices such as agricultural conversion, deforestation, and urban sprawl continue to degrade and fragment remaining pockets of habitat and accelerate biodiversity loss. Pesticides and other forms of pollution are also of serious concern, as well as genetically modified organisms (GMOs).

Scorpions are also threatened by the pet trade. Captivity is cruel for wild animals. Animals are captured from their native habitat and transported to various countries to be sold as “pets”. Backyard breeders also supply exotic animals. The sellers of these animals often disregard the dangers, difficulties, physical and physiological needs of the animals they peddle. The suffering of the animals in the hands of unqualified and hapless buyers appears to be of no concern in the lucrative exotic pet trade.