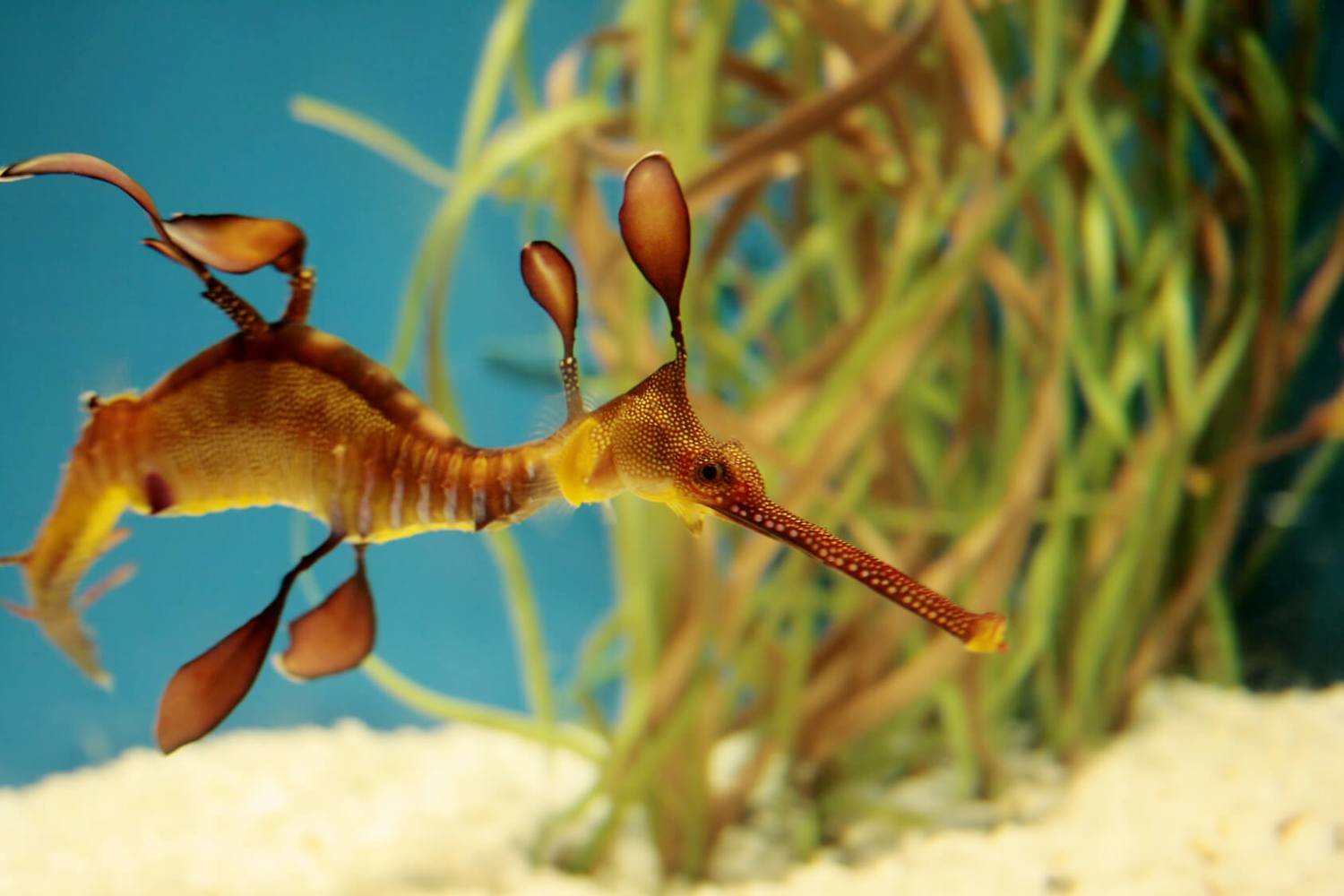 Your Adopt A Seadragon Kit comes in a Deluxe Folder and includes:

Adopt A Seadragon Kits make great gifts and can be sent directly to the recipient. Simply supply the recipient's name and mailing address as shipping information. We'll even include a letter stating the Adopt An Animal Kit is from you.

Seahorses and seadragons are marine fish belonging to the family Syngnathidae. They are found in temperate and tropical waters all over the world.

Seahorses and seadragons range in size from 16 mm to 35 cm. They are notable for being the only species where the males get pregnant. Seadragons differ from the seahorse in appearance, form of locomotion, and the inability to coil or grasp things with their tails.

The seahorse and seadragon are true fish, with a dorsal fin located on the lower body and pectoral fins located on the head near their gills. Some species of are partly transparent.

Seadragons are close relatives of seahorses but have bigger bodies and leaf-like appendages which enable them to hide among floating seaweed or kelp beds. Seadragons feed on larval fishes and amphipods, such as small shrimp-like crustaceans called mysids (sea lice), sucking up their prey with their small mouths. Many of these amphipods feed on red algae that thrives in the shade of the kelp forests where the seadragons live.

The male has a brood pouch where he carries eggs deposited by the female. The mating pair entwines their tails and the female aligns a long tube, called ovipositor, with the male's pouch. The eggs move through the tube into the male's pouch where he then fertilizes them. The embryos will develop between ten days and six weeks, depending on species and water conditions. When the male gives birth, he pumps his tail until the babies emerge.

The males pouch regulates salinity for the eggs, slowly increasing in the pouch to match the water outside as the eggs mature. Once the offspring hatch, the male releases them and is done caring for them.

Once released, the offspring are independent of their parents. Some spend time among the ocean plankton developing before settling down and hitching as their parents do. Other species (H. zosterae) hitch immediately and begin life in the benthos.

Seahorses and seadragons are frequently monogamous, though several species (H. zosterae and H. abdominalis) are highly gregarious. In monogamous pairs, the male and female will greet one another with courtship displays in the morning, and in the evening to reinforce their pair bond. They spend the rest of the day separate from each other hunting for food.

Seahorse and seadragon populations have been endangered in recent years by overfishing. The seahorse is used in traditional Chinese herbology, and as many as 20 million seahorses may be caught each year and sold for this purpose.

Import and export of seahorses is controlled under CITES since May 15, 2004.