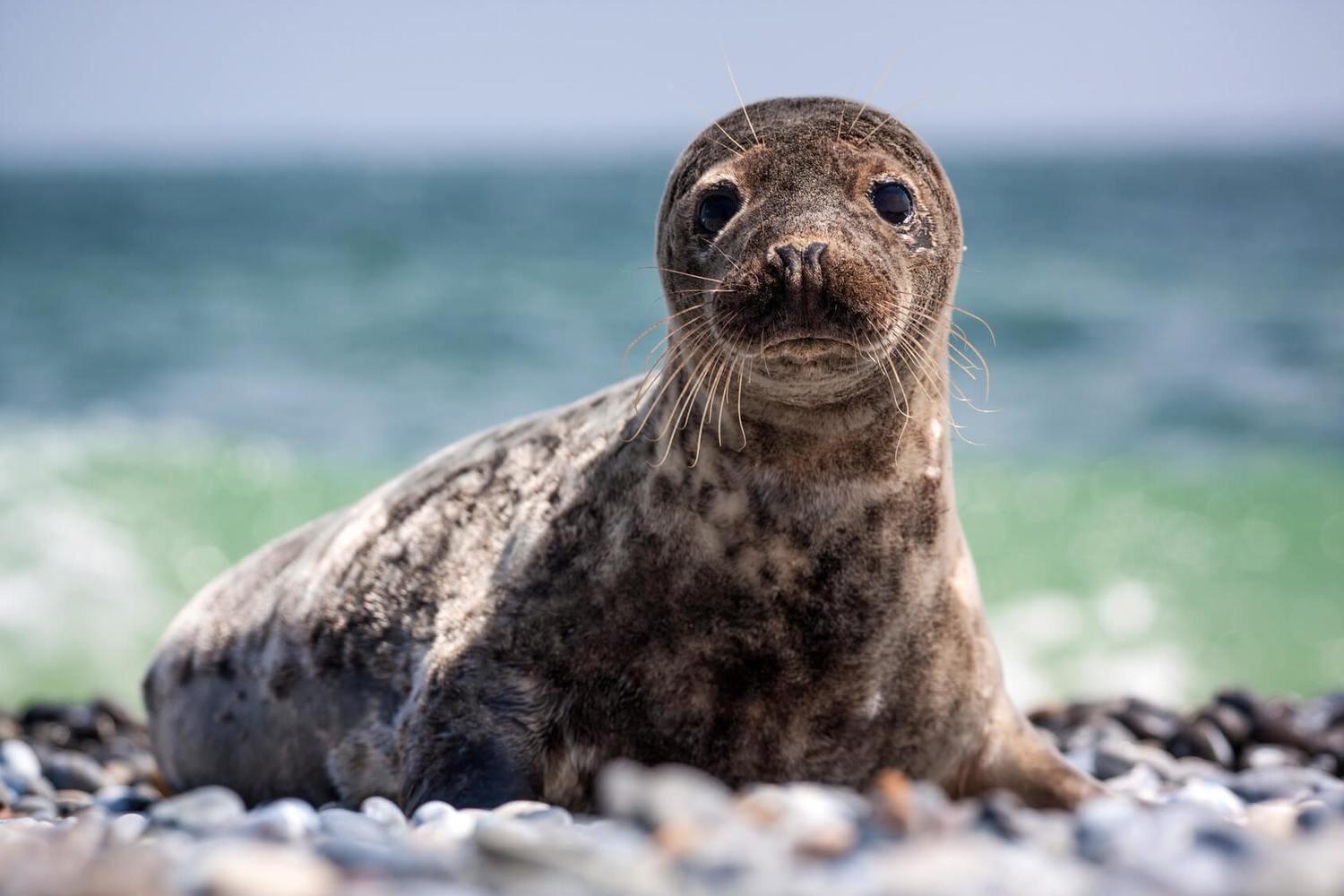 Your Adopt A Seal Kit comes in a Deluxe Folder and includes:

Adopt A Seal Kits make great gifts and can be sent directly to the recipient. Simply supply the recipient's name and mailing address as shipping information. We'll even include a letter stating the Adopt An Animal Kit is from you.

Seals are carnivorous aquatic mammals with front and hind feet modified as flippers, or fin-feet. The name seal is sometimes applied broadly to any of the fin-footed mammals, or pinnipeds, including the walrus, the eared seals (sea lion and fur seal), and the true seals, also called earless seals, hair seals, or phocid seals. More narrowly the term is applied only to true seals.

Pinnipeds have streamlined bodies, rounded in the middle and tapered at the ends, with a thick layer of fat beneath the skin. Their limbs are short and their feet are long and webbed, forming flippers. Sea lions, fur seals and the walrus are able to turn their hind flippers forward for walking on land; they swim chiefly by a rowing action of the long front flippers. True seals are unable to rotate the hind flippers. They progress on land by wriggling on their bellies, pulling themselves with the short front flippers. In the water they are propelled by a side-to-side sweeping action of the hind flippers.

True seals are called earless seals because they lack external ears, though they have functional inner ears. They have short, coarse hair, usually with a close, dense undercoat. Their color and pattern vary with the species. Many are spotted. The pups of most species have fluffy coats of a light color. True seals are generally polygamous and gregarious, but most do not form harems at breeding time, as do the eared seals. Some species have definite migrations, but in most the seals spread out after breeding, singly or in groups, over a wide area of ocean. Some polar species migrate in winter to avoid the advancing ice; members of other species winter under the ice, surfacing through holes to breathe. Most true seal species fall into one of three geographical groups: northern, antarctic and warm-water species.

Nearly all pinnipeds are marine, and most inhabit cold or temperate regions. They have an amphibious lifestyle, spending most of their lives in the water but hauling out to mate, raise young, molt, rest, thermoregulate or escape from aquatic predators. Some spend most of the year in the open ocean, while others inhabit coastal waters and spend varying amounts of time on shores, islands or ice floes. Occasionally they ascend rivers.

All pinnipeds leave the water at least once a year, at breeding time. In nearly all species the females give birth a year after mating, so that the births take place on land, just before breeding begins. The pups are nursed on land.

Some species spend most of the year far from their breeding grounds. Several species are known to migrate vast distances. The northern fur seals make particularly lengthy migrations each year. Traveling seals may use various features of their environment to reach their destination including geomagnetic fields, water and wind currents, the position of the sun and moon and the taste and temperature of the water.

Pinnipeds have lifespans averaging 25–30 years. Females usually live longer, as males tend to fight and often die before reaching maturity. The longest recorded lifespans include 43 years for a wild female ringed seal and 46 years for a wild female grey seal. The age at which a pinniped sexually matures can vary from 2–12 years depending on the species. Females typically mature earlier than males.

All pinnipeds are carnivorous and predatory. Most have diets of fish and shellfish; many are bottom feeders, with physiological adaptations for deep diving. They have acute hearing and some, if not all, make use of echolocation (sonar) for underwater navigation. Pinnipeds may hunt solitarily or cooperatively. Though they can drink seawater, they get most of their fluid intake from the food they eat.

Pinnipeds themselves are subject to predation. Most species are preyed on by orcas. They are also targeted by terrestrial predators, including polar bears, bears, cougars, hyenas and various species of canids. Pinnipeds lessen the chance of predation by gathering in groups.

The mating system of pinnipeds varies from extreme polygyny to serial monogamy. Of the 33 species, 20 breed on land, and the remaining 13 breed on ice. Species that breed on land are usually polygynous, as females gather in large aggregations and males are able to mate with them as well as defend them from rivals. Land-breeding pinnipeds tend to mate on islands where there are fewer terrestrial predators. Few islands are favorable for breeding, and those that are tend to be crowded. Since the land they breed on is fixed, females return to the same sites for many years. The males arrive earlier in the season and wait for them. The males stay on land and try to mate with as many females as they can; some of them will even fast. If a male leaves the beach to feed, he will likely lose mating opportunities and his dominance. Since ice is less stable then solid land, pinnipeds that breed on ice change location each year.

All species go through delayed implantation, where the embryo remains in suspended development for weeks or months before it is implanted in the uterus. Delayed implantation postpones the birth of young until the female hauls-out on land or until conditions for birthing are favorable. Gestation in seals (including delayed implantation) typically lasts a year. For most species, birthing takes place in the spring and summer months. Typically, single pups are born; twins are uncommon and have high mortality rates.

Mother pinnipeds have different strategies for maternal care and lactation. Some seals remain on land or ice and fast during their relatively short lactation period–four days for the hooded seal and five weeks for elephant seals. The milk of these species consist of up to 60% fat, allowing the young to grow fairly quickly. Some, like the harbor seal, fast and nurse their pups for a few days at a time. In between nursing bouts, the females leave their young onshore to forage at sea. These foraging trips may last anywhere from a day to two weeks, depending on the abundance of food and the distance of foraging sites. While their mothers are away, the pups will fast.

Pinnipeds communicate with a number of vocalizations such as barks, grunts, rasps, rattles, growls, creaks, warbles, trills, chirps, chugs, clicks and whistles. Vocals are produced both in air and underwater. Vocalizations are particularly important during the breeding seasons. Dominant male elephant seals advertise their status and threaten rivals with "clap-threats" and loud drum-like calls. In some pinniped species, there appear to be geographic differences in vocalizations, known as dialects.

Seals are able to demonstrate an understanding of symmetry, transitivity and equivalence. They demonstrate the ability to understand syntax and musical rhythms. Some have been trained to imitate human words, phrases and laughter.

Each year thousands of seals are killed in Canada. Seal-clubbing is justified by the Canadian government because its victims are adversely affecting the profits of the Newfoundland fishing industry.

A harp seal can be legally killed as soon as it has begun to moult its white hair, around 2 weeks after birth. Adult seals are also killed. The seal hunt is one of the very few hunts that occurs in the spring when young are being born. As a result, roughly 80% of the seals killed in the commercial hunt are 'young of the year' - between approximately 12 days and 1 year old.

Six species of seals - including the harp, hooded, grey, ringed, bearded and harbour - are found off the Atlantic coast of Canada. Harp and hooded seals are the two most common species hunted commercially. In recent years small numbers of grey seals have been hunted for commercial use. The majority of seal pelts are still exported to Norway for processing. The seal pelts are either used for furs or leather.

Seal hunting is inhumane. Groups have campaigned on the issue for years and their evidence shows all the horror of the hunt. Many people remember the worldwide protest that arose in the 1970s over Canada’s killing of whitecoat seal pups (under two weeks old). The massive protest, with international campaigning against the Canadian seal hunt during the 70s & 80s, led to the European Union ban on the importation of whitecoat pelts in 1983, and eventually to the Canadian government banning large-vessel commercial whitecoat hunting in 1987.

Canada's cod fishery collapsed in the early 90s, and some in Canada blamed the seals, despite the fact that the greatest cause was clearly decades of over-fishing by humans. The collapse of fisheries around Newfoundland, due to mismanagement, is a major driver in the expansion of the seal hunt.

Although the Canadian seal hunt is the largest in the world and has the highest profile internationally, sealing is also carried out in a number of other countries across the world including Greenland, Namibia, Russia, Norway and Sweden.

Seals are also common victims of the animal entertainment industry. Aquariums and marine mammal theme parks are part of a billion-dollar industry built on the suffering of intelligent, social beings who are denied everything that is natural and important to them. Animals are taken from the wild; their families torn apart.

Marine parks have shown no more interest in conserving marine mammals' natural habitats than they have in educating audiences. Cetaceans do not belong in captivity where they are forced to perform meaningless tricks. They are often separated from family members when they’re shuffled between parks. Most die far short of their natural life spans.

The living conditions at these attractions are often dismal, with animals confined to tiny, filthy, barren enclosures, but even the best artificial environments can’t come close to matching the space, diversity, and freedom that cetaceans have in their natural habitats.