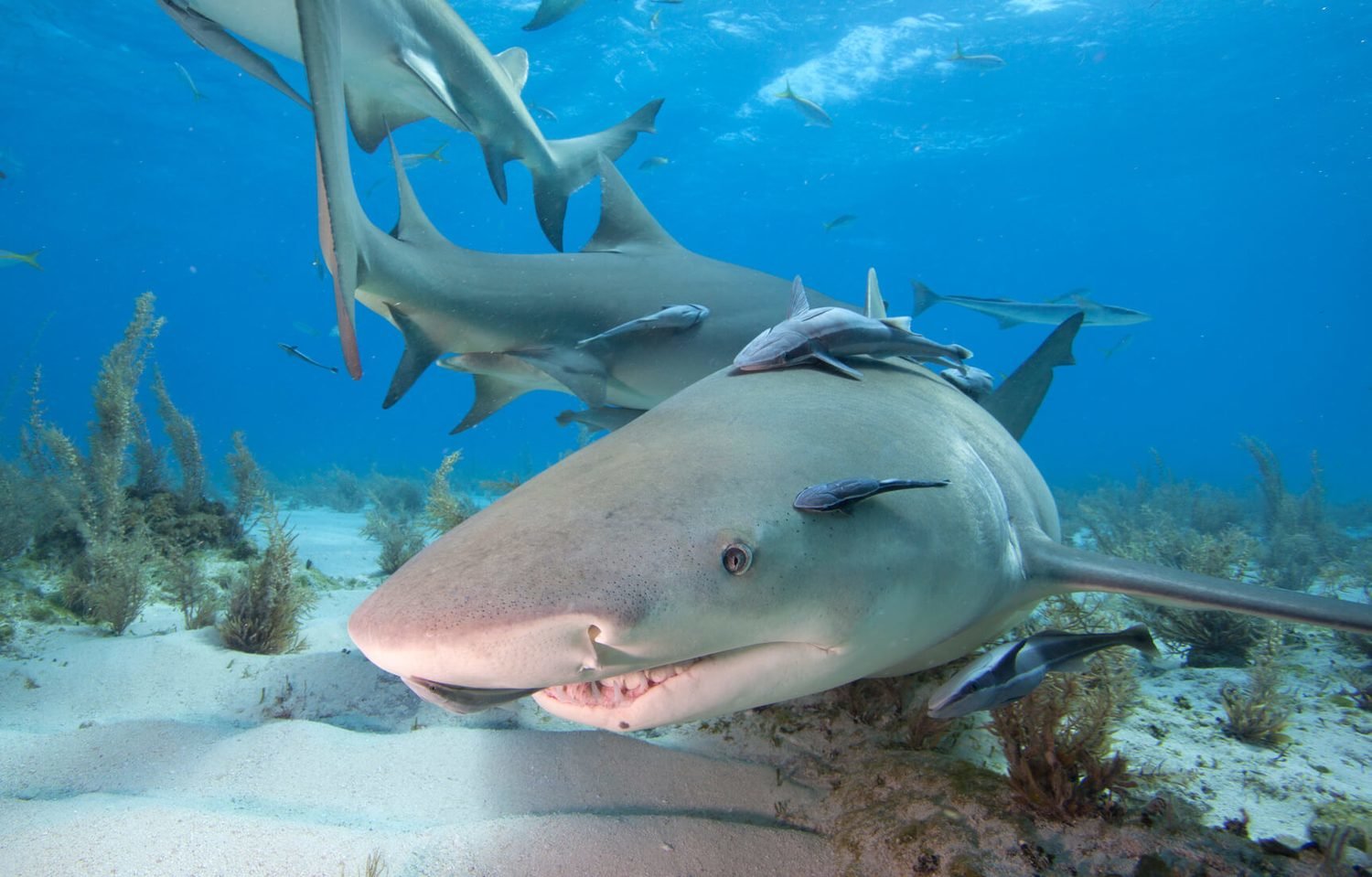 Your Adopt A Shark Kit comes in a Deluxe Folder and includes:

Adopt A Shark Kits make great gifts and can be sent directly to the recipient. Simply supply the recipient's name and mailing address as shipping information. We'll even include a letter stating the Adopt An Animal Kit is from you.

Sharks are members of a group of almost exclusively marine and predaceous fishes. There are about 250 species of sharks, ranging from the 2 feet pygmy shark to 50 feet giants. They are found in all seas, but are most abundant in warm waters. Some may enter large rivers, and one ferocious freshwater species lives in Lake Nicaragua. Most are predatory, but the largest species, the whale shark and the basking shark, are harmless plankton eaters. Dogfish is the name for members of several families of small sharks; these should not be confused with the bony dogfishes of the mud minnow and bowfin families.

Sharks are heavy fishes, possessing neither lungs nor swim bladders. Their skeletons are made of cartilage rather than bone, and this, along with large deposits of fat, partially solves their weight problem. Nevertheless, most sharks must keep moving in order to breathe and to stay afloat. They are good swimmers; the wide spread of the pectoral fins and the upward curve of the tail fin provide lift, and the sweeping movements of the tail provide drive. Their tough hides are studded with minute, toothlike structures called denticles. Sharks have pointed snouts. Their crescent-shaped mouths are set on the underside of the body and contain several rows of sharp, triangular teeth. They have respiratory organs called gills, usually five on each side, with individual gill slits opening on the body surface. These slits form a conspicuous row and lack the covering found over the gills of bony fishes.

Like most fishes, sharks breathe by taking water in through the mouth and passing it out over the gills. Usually there are two additional respiratory openings on the head, called spiracles. A shark's intestine has a unique spiral valve, which increases the area of absorption. Fertilization is internal in sharks; the male has paired organs called claspers for introducing sperm into the cloaca of the female. Members of most species bear live young, but a few of the smaller sharks lay eggs containing much yolk and enclosed in horny shells. Compared to bony fishes, sharks tend to mature later and reproduce slowly.

Only a small number of the predatory species are definitely known to occasionally engage in unprovoked attacks on humans. The largest and most feared of these is the great white shark, which may reach 20 feet in length and is probably responsible for more such attacks than any other species. Other sharks reputed to be slightly dangerous are the tiger and blue sharks and the mako. Sharks are extremely sensitive to motion and to the scent of blood. Swimmers in areas where dangerous varieties occur should leave the water quietly if they are cut. In some places bathing areas are guarded by nets. A number of substances have been used as shark repellents, but their effectiveness is variable. Sharks usually circle their prey before attacking. Since they seldom swim near the surface, an exposed dorsal fin is more likely to be that of a swordfish or ray than that of a shark.

Sharks can range from being just inches in length (like the tiny cookie cutter shark) to being larger than a school bus (like the giant plankton-eating whale shark). Though sharks perform the same role in the ocean ecosystem that is performed by well-known predators such as lions, tigers, and cheetahs on land, the fact that they live in such an alien world makes it hard for us to know about their lives. What we do know is pretty fascinating.

Sharks shed their teeth. A single shark may lose thousands of teeth over its life and this accounts for the many shark teeth found by beach combers throughout the world. Their teeth are connected to a membrane in their mouth that is constantly being pushed forward as new teeth form. New teeth are generally slightly larger than the ones before. This allows the size of the shark's teeth to keep pace with the growth of the rest of the body.

Sharks are picky eaters. Some sharks eat only plankton, others eat small fish or squid, and still others eat large fish and marine mammals. The type of teeth a shark has will show you what it eats. Great white sharks have teeth with serrated edges for slicing off pieces from larger prey, the teeth of mako sharks are thin and pointed for grabbing onto slippery fish. Nurse sharks and other bottom dwellers tend to have thicker teeth for crushing shellfish. No matter the tooth shape, sharks never chew their food.

You're more likely to die as a result of being electrocuted by holiday lighting than being attacked by a shark. More deadly than shark attacks each year are crocodile attacks, hippo attacks, and even attacks by pigs.

Many sharks are warm blooded. Unlike the rest of the fishy world, many large sharks can maintain their body temperature higher than the ocean temperature around them. We don't know whether sharks sleep. Sometimes they seem to rest, but their eyes don't close and if they sleep, they certainly don't sleep the way that mammals can.

Don't be afraid OF sharks; be afraid FOR them. There are more misunderstandings and untruths about sharks than almost any other group of animals on the planet. While many people fear sharks, it is the sharks who should be fearing us.

According to the shark attack file, maintained by the Florida Museum of Natural History, on average 5 people die worldwide from shark attacks. Up to 70 million sharks are killed by humans each year, mostly for their fins. This is a devastating death toll for a long-living species that is as slow to reproduce as sharks.

Sharks have roamed the oceans far longer than most land animals have been here. They were here before many of the dinosaurs and have outlasted them. But an international assessment of sharks undertaken by the World Conservation Union reveals that their future is in doubt. Of 546 shark species assessed, 111 species were at significant risk of global extinction. Twenty species are listed as critically endangered and 25 as endangered. Some shark species have lost 80% of their populations just in the past 40 years including hammerhead sharks, thresher sharks, and porbeagle sharks. While hammerhead shark is a name familiar to most, most people have never heard of porbeagle sharks; some of the lesser known sharks are in even greater danger.

There is a lot we don't know about sharks, but we DO know that if we don't act soon to stop overfishing, some of the most ancient and magnificent animals on the planet may soon disappear.