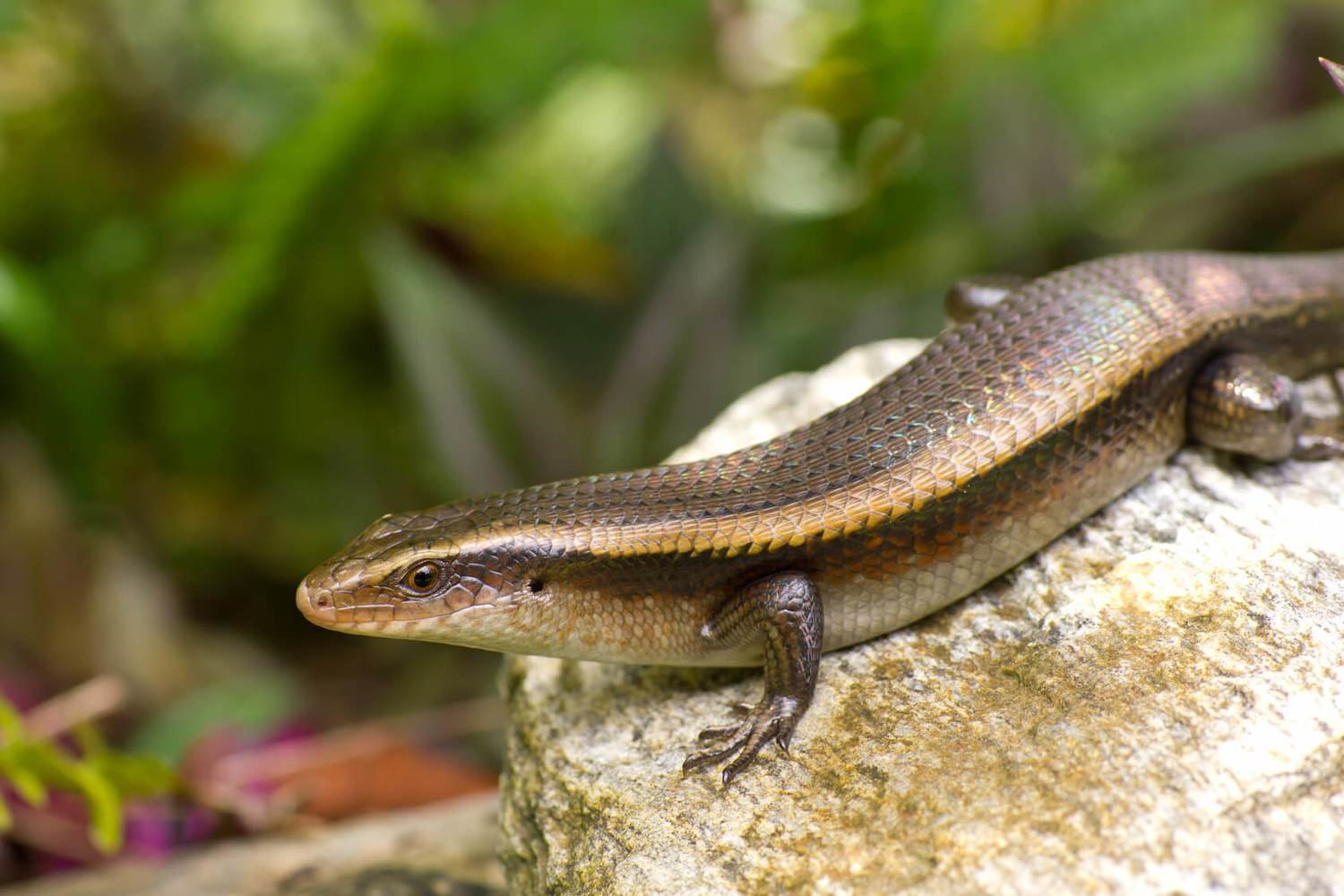 Your Adopt A Skink Kit comes in a Deluxe Folder and includes:

Adopt A Skink Kits make great gifts and can be sent directly to the recipient. Simply supply the recipient's name and mailing address as shipping information. We'll even include a letter stating the Adopt An Animal Kit is from you.

Members of one of the most diverse groups of lizards, skinks are reptiles with cylindrical, streamlined bodies, functioning eyelids and tight, smooth, scaly skin. They belong to the family Scincidae, and their name comes from the Greek word skinkos, which was a name that was used to refer to lizards in a specific region of the country. Over 1500 distinct species of skinks have been described, living in a wide range of habitats worldwide, from dry deserts, to mountains, grasslands and forests.

Although skinks are close in appearance to ‘true lizards’ (such as wall lizards, for example), they don’t have a distinct neck, and their legs tend to be smaller. Interestingly, some species of skink actually have reduced limbs or even no limbs at all, making their movement appear far more like a snake than a lizard - which is what many people may mistake them for. A few certain skink species, like the blue-tongued skink, also tend to be more broad-headed and wider-bodied than their relatives.

The particular living environment of a skink can often be determined merely by its toe length – generally, the longer a skink’s digits (toes), the more likely it is to spend most of its time climbing in trees.

These unusual reptiles tend to be small to medium sized, on average, depending on the species. They can range from specimens as tiny as the little brown skink at 3 inches, to as large as the Solomon Islands skink at 14 inches, though their tails usually make up more than half of that length.

Many skink species are escape artists. They can shed their tails when necessary if predators grab them, and can re-grow the lost part. The shed tail will actually wiggle for a short period of time after being lost, which serves to distract any potential predators while the skink makes its escape. Skinks may also return to the lost tail and ingest it in order to regain lost nutrient value.

Active, quick, and agile little lizards, skinks can dart rapidly from place to place when they’re not found basking on warm rocks or logs. Offspring-bearing females or mating pairs tend to be slower, however. Some species of these lizards are tree-climbing, but for the most part, most tend to live in ground habitats (so they’re terrestrial, in other words), or prefer to burrow through sand. They’re most active in the daytime.

Skinks like to stay safe and out of the reach of predators or bad weather, and make their nests in secure, hidden areas. For some, this can mean a nest in the dirt or under heavy brush cover. For other skinks (especially those in and around urban areas) rotting boards, garages or spaces under structures like sheds can be suitable nesting areas. Some nests can contain anywhere from 10 to 30 skinks at a time, and it’s not unusual for skinks to actually ‘guard’ their territory. A small number of skink species are also water-dwelling, but these tend to be the exception.

Skinks are fairly predictable eaters. Being carnivorous lizards, their menu choices tend to run to insects like flies, beetles and caterpillars, but some may even eat snails or small rodents. They sniff out prey using their tongue, and then chase it down, corner it, and usually swallow it whole.

The method of producing young can be different from species to species of skink. Male skinks will sometimes fight each other for the privilege of mating with a certain female by biting each other on the head, neck or tail. Male-female pairs in some species will form monogamous relationships from year to year. Just under half of all skink species birth live young, nourishing their offspring though a placenta-like organ. Other species hatch their eggs internally instead, and then give birth to young after that. Still others lay eggs which hatch outside their body.

Females tend to be protective of their eggs, coiling around them and guarding against predators, and will often stay to protect their new offspring for the first few days until they leave the nest. Skinks can have significant gestation times, typically several months and as long as one year in some species. They have been noted to have as few as 1 or as many as 67 young born at one time.

Although many skinks are highly adaptable when it comes to their nesting situation, they also have a large number of natural predators. Raccoons, snakes, crows, herons, hawks and other lizards may see skinks as a tasty meal.

Because the skink’s long gestation period means that they can’t replenish their population numbers as quickly as other animals, overhunting by larger invasive predators like the mongoose has caused skink species in some areas to approach extinction. The Anguilla Bank skink in the Caribbean is one example.