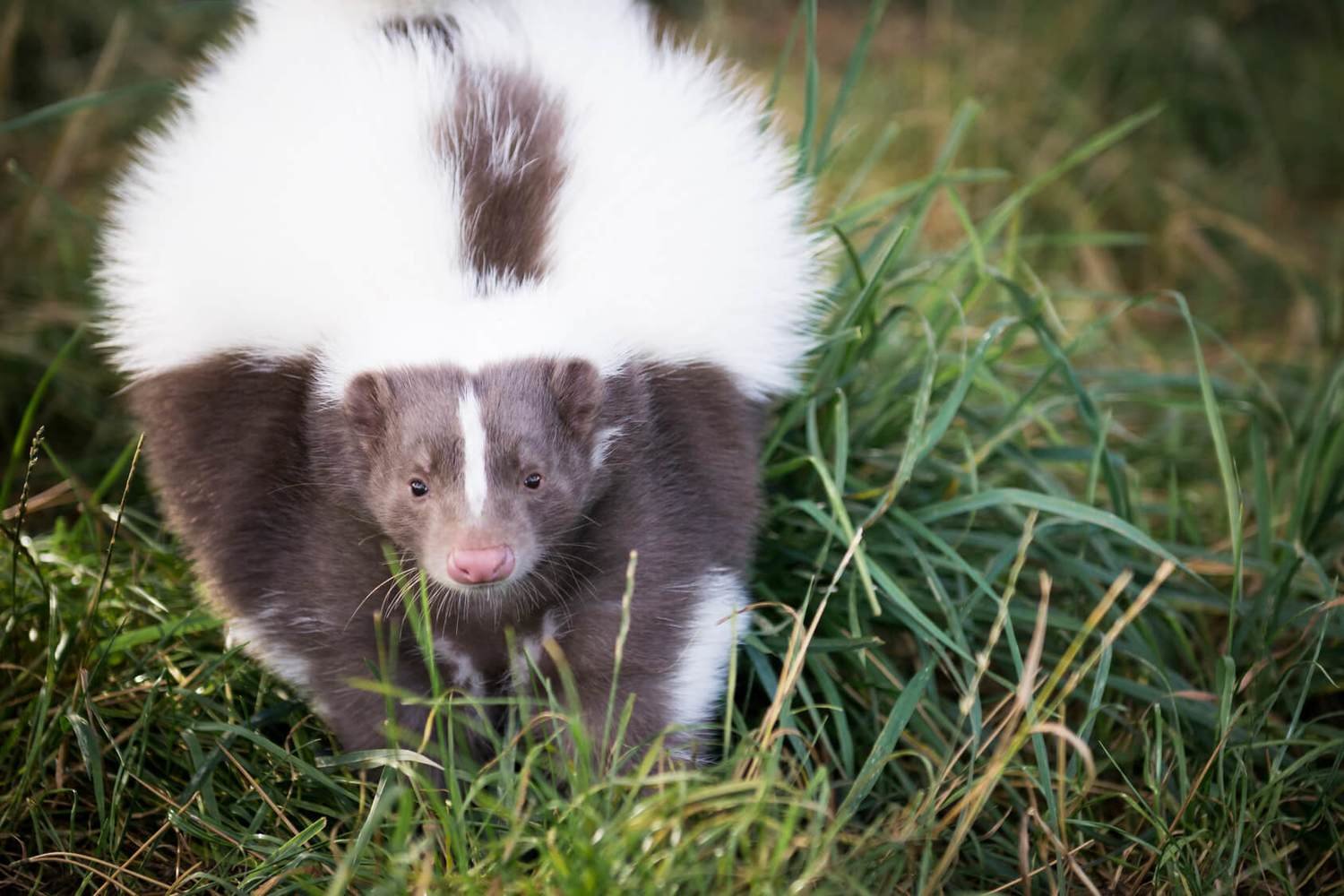 Your Adopt A Skunk Kit comes in a Deluxe Folder and includes:

Adopt A Skunk Kits make great gifts and can be sent directly to the recipient. Simply supply the recipient's name and mailing address as shipping information. We'll even include a letter stating the Adopt An Animal Kit is from you.

Known for their highly effective and tremendously pungent defensive tactics, skunks are some of the most infamous animals around. Members of the family Mephitidae, the name of these distinctive little mammals likely originated from 1600’s Algonquian language. Although they can vary in appearance, almost all species of skunks are found in the Americas (ranging from Canada to central South America), with the exception of Asian stink badgers, which are generally found in Indonesia and the Philippines.

Differing in size and weight depending on species, these odiferous creatures can range from around 15 to 37 inches in length and weigh from around 1lb up to around 18 lb in weight – on average, around the size of a typical housecat. Although they’ve been known to live as long as 10 years in captivity, most skunks in the wild don’t live past the age of one or two, since many fall victim to pest control campaigns or collisions with vehicles because of their poor vision. They’re generally thickly furred and short-limbed with fairly compact bodies, including well-muscled forelegs and sharp claws that are well suited to digging for food or building burrows in the earth. Although skunk coat patterning and coloration is unique to specific species, every skunk is striped from birth, acting as a built in visual warning for predators who might consider the skunk an easy meal. Most skunk species are typically black and white, but coat colors for certain species might include brown, grey, or even cream colored. Some even have a series of spots and stripes combined, or stripes on their legs as well.

The scent of a skunk is its most renowned characteristic, as well as being one of the most effective existing defensive tactics within the animal kingdom. Skunks produce a very obnoxiously scented mixture of chemical oils within two small organs known as anal glands, found on either side of their anus. Strong muscles beside these glands allow a skunk to accurately spray their target as far as 10 feet away. As well as being extremely repulsive; skunk spray is extremely irritating and can even cause temporary blindness in some cases. Because these glands only produce a limited amount of spray, skunks are usually reluctant to use their spray as an initial protection, so they’ll go through a warning routine of foot-stamping, hissing and tail flagging postures before resorting to spraying as a last resort defence. The pungency of skunk spray is so strong that skunks are often able to deter bears and other predators from attacking them, and most people can smell a skunk from as far as ½ a mile away.

Because of their tenacious nature when survival is on the line, it’s not surprising that many skunks have learned to live and thrive in urban environments. Besides being omnivorous, these unique animals are opportunistic foragers and occasional scavengers, changing their diet with the availability of their food. They’ll use their sharp claws to dig holes in search of food, and a meal for a skunk might range from berries, leaves and grasses to insects, bees, worms or grubs. Some skunks may also eat lizards, frogs, snakes, moles, birds and bird eggs, as well as pet food and human refuse if available.

Not usually seen during daylight hours, skunks are most active at dawn and dusk, usually preferring to forage alone assisted by their highly developed senses of smell and hearing. Daylight means rest time for these small creatures, and they tend to shelter in self-made burrows until the sun sets. In colder weather, they’ll stay in their dens for increased periods of time, and groups of female skunks usually like to winter together to stay warm. They aren’t true hibernators, as they will emerge from their den during winter, but they do enter a more dormant phase feeding only occasionally and staying fairly inactive.

Like many other mammals with less active winter cycles, these small creatures mate in early spring and typically give birth to litters of four to seven kits around two months later. Males generally mate with more than one female to ensure successful genetic distribution. Skunk kits are born helpless, blind and deaf, and stay in the den for the first several weeks as they nurse from their dam. Male skunks don’t play any part in the raising or care of their kits. Around the age of three weeks, their eyes open, and around the age of two months, they become weaned and leave the den, though they tend to stay with the female until they’re sexually mature which happens around one year of age. Skunk mothers are particularly protective, too; a female who senses any threat to her kits won’t hesitate to spray potential predators.

Despite their smelly defences, there are still one or two predators who dare to hunt these small striped opponents. Domestic dogs tend to be the most numerous predators, with some even hunting skunks repeatedly despite retaliation. Wolves and other wild canids rarely hunt skunks themselves unless they’re desperate for food. The great horned owl is a skunk’s only consistent predator, swiftly killing them from the air and bringing them back to their nests to feed.

Although most skunk species are fairly populous, there are a variety of hazards that pose a danger to them. One species in particular, the Eastern Spotted skunk, is currently listed as endangered is some states because of population decline due to farming practices that eliminate ground cover. Some species have traditionally been hunted to harvest their pelts, while pesticide use in many areas has decreased the food supply that’s available for skunks. As a skunk’s foraging nature often leads it to roam across roads in search of food, collision with moving vehicles is a common occurrence for almost all skunk species.