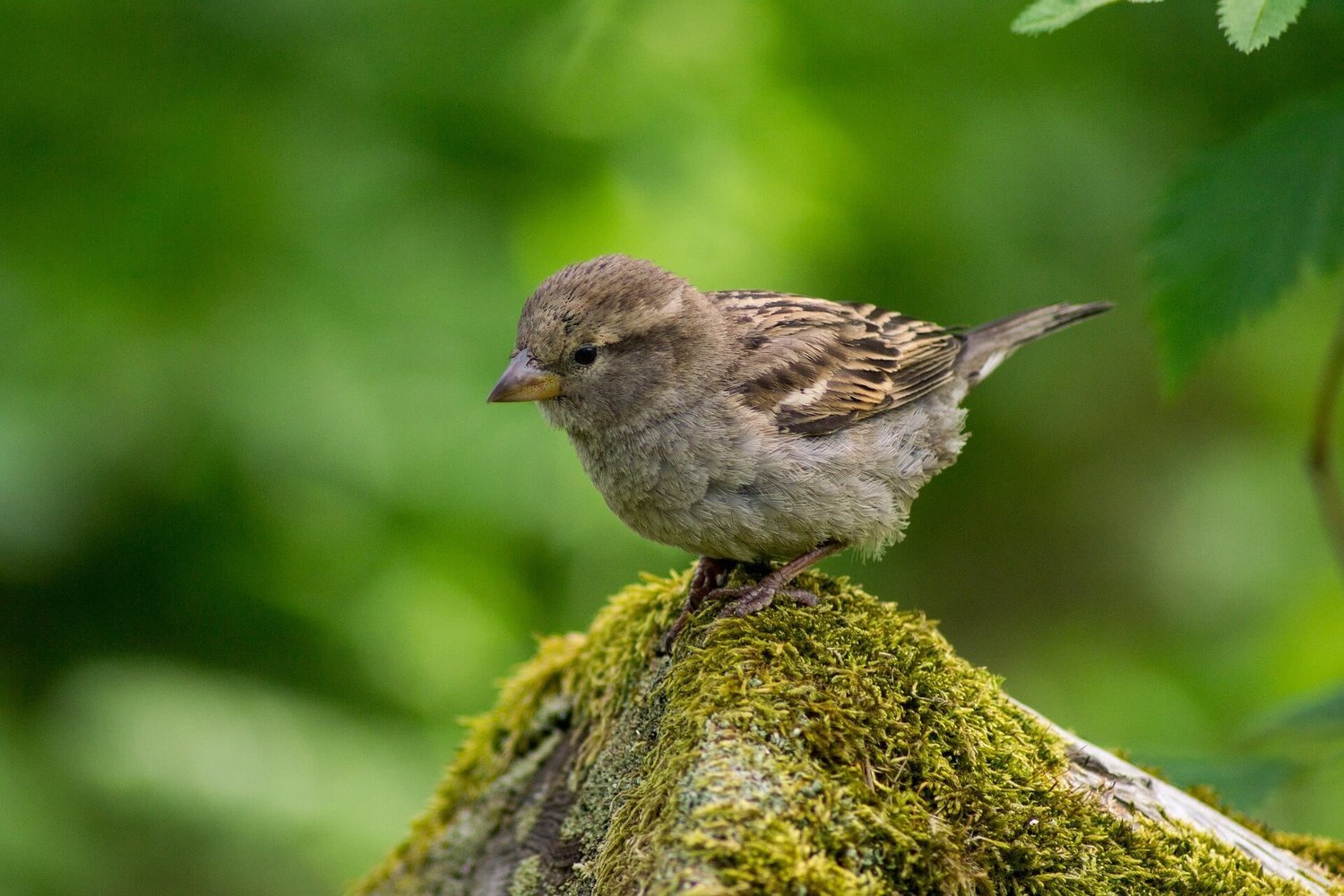 Your Adopt A Sparrow Kit comes in a Deluxe Folder and includes:

Adopt A Sparrow Kits make great gifts and can be sent directly to the recipient. Simply supply the recipient's name and mailing address as shipping information. We'll even include a letter stating the Adopt An Animal Kit is from you.

Sparrows are small birds found around the globe. Originating from Europe, Northern Africa and Asia, human travelers introduced sparrows to almost every continent. Sparrows prefer to live close to human settlements, including rural and urban areas. There are around 140 species of sparrow.

Sparrows are very small and have stout bodies covered with black, brown and white feathers. Their wings are rounded. Sparrows have smooth, rounded heads. Male sparrows have reddish backs and black bibs. Female sparrows have brown backs with stripes.

Sparrows can fly fast and can swim quickly to escape predators. They can even swim under water. Sparrows often hop around instead of walking. They bathe in dust.

Sparrows are omnivores, feeding on seeds, fruit and insects. They are known for adjusting their eating habits based on food sources provided by humans. They are frequent visitors to bird feeders. Sparrows usually forage for food on the ground.

Sparrows are very social birds. They live in colonies, called flocks, and fly together. While not usually territorial birds, sparrows will aggressively protect their nests from other sparrows and other animals.

Sparrows are usually non-migratory, but urban flocks may move to the countryside in the late summer to feed on grains.

Sparrows are extremely vocal birds that chirp all the time. Sparrows use song to attract mates and announce their territory. Female sparrows are attracted not just to the male sparrow's song, but also to how well it reflects his ability to learn. Males that utilize more learned components in their songs, and that better match the adult bird they learned their songs from, are preferred by the females. Sparrows also use a set of postures and behaviors to communicate with other.

Sparrow mating season occurs in the spring. Sparrows were once thought to be monogamous, but most sparrows have sex with multiple partners. Sparrows construct nests in trees, shrubs and man-made structures. Male sparrows often build the nest while attempting to attract females. Interested females then help in the construction. Sometimes sparrows take over nests of other bird species. Female sparrows lay 4 to 5 eggs per clutch, having several broods each year. Mother sparrows incubate the eggs for a couple of weeks. Both the female and the male may take care of the babies until they are strong enough to leave the nest, usually in about 15 days.

Being small birds, sparrows have numerous predators including dogs, cats, foxes, snakes and birds of prey.

Sparrows live up to 13 years in the wild.

Sparrow populations have decreased dramatically due to irresponsible human activities. Some sparrows are now listed as threatened, nearly endangered. Sparrows are threatened by modern agricultural practices, pollution, pesticides, predators and a reduced amount of gardens. Some sparrows are losing their main food sources and are struggling to survive winters.